Bill of the Week: No-Fault Divorce on the Chopping Block

Rep. Matt Krause, R-Ft. Worth, wants to make it harder to get a divorce Matt Krause wants to make it more difficult for unhappy married couples to split up. His HB 93 would eliminate no-fault divorce, a longstanding policy that allows couples to dissolve their marriages amicably without having to allege a cause of wrongdoing against each other. The Ft. Worth conservative claims this would restore the sanctity of marriage and force couples to try harder on their relationships before divorcing. Opponents argue such a law would place families in jeopardy, increase time and expense, and add barriers to escaping domestic violence.

Texas adopted no-fault divorce in 1970, after other states – including Ronald Reagan's California – enacted the measure. (Today, all states employ the policy.) Prior to 1970, married couples were forced to prove in court that one spouse cheated, showed cruelty, lived in a mental hospital, engaged in a felony, or abandoned the other after a year of living apart. Because of the policy change, Texans can now choose "insupportability" as a just cause, something Rep. Krause doesn't like.

No doubt the standing policy has allowed a more peaceful and less expensive avenue of divorce, one that places less tension on families and children. No-fault also made the often dangerous process of separating from a domestic abuser less complicated. States that have adopted no-fault divorce have seen a 30% drop in domestic violence and a decline in suicide rates among wives.

Steven Bresnen, an Austin-based attorney and lobbyist with the Texas Family Law Foundation, admitted that the lawyers he represents would likely benefit from the proposed law, but even so, he called it a "harmful" piece of opposition legislation that would return Texas to the "bad old days." "In situations that are often emotionally fraught, it becomes more so because you now have to develop evidence and proof that fault occurred," said Bresnen. "It's essentially the state forcing people to stay together and denying them the free will to do what they should be able to do as adults."

A version of this article appeared in print on January 27, 2017 with the headline: Bill of the Week: Breakin’ Up Is Hard(er) to Do 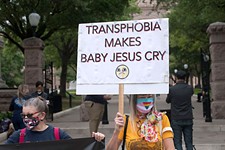 For Trans Texans, One Bill Forward, Two Bills Back
Texas has filed the most anti-LGBTQIA bills in the nation this year