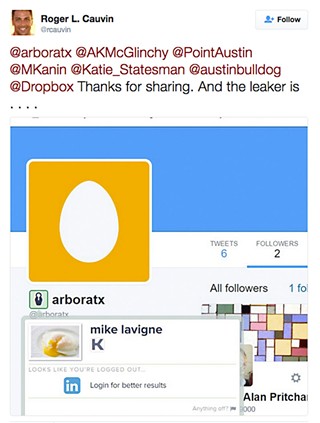 A surprise leak has juiced up the drama surrounding the impending debut of CodeNEXT's first public working draft. Last Saturday, Jan. 14, an unidentified party uploaded and publicized a file labeled "codenextdraft," a 327-page digital document that looks to the naked eye like a portion of the anticipated CodeNEXT draft.

The file hit public spectrum via six posts to Twitter (using the @arboratx handle) that each tagged various reporters, City Council members, and stakeholder groups, such as the Austin Neighborhoods Council and Preservation Austin. Most messages contained breathless warnings about how changes to the land development code could change Austin. "Doubling down on overdevelopment," one warned. "Destroying our history to make way for hipsters," read another. On Tuesday, the city's Planning and Zoning Department issued a statement on @arboratx's release, calling the document in question "an incomplete and preliminary draft version of" CodeNEXT's ultimate goal: a completely rewritten version of Austin's byzantine land development code.

The source of both the leak and the tweets remains unclear, though circumstantial evidence points to Mike Lavigne, an outspoken critic of Central Austin development as well as a spokesperson for the political action committee Arbor PAC. In the November election, that group supported both District 7 Council Member Leslie Pool and new D10 CM Alison Alter in two growth-focused races; Alter and Pool are the only two council members tagged in @arbor­atx's tweets. Further, an amateur online detective – Roger Cauvin, who served on the Imagine Austin task force, played a formative role in the CodeNEXT process, and is board secretary of the Down­town Austin Neigh­borhood Association – deployed a browser extension that alleges to indict Lavigne as being behind the account.

Lavigne flatly denied any connection to the tweets, telling the Chronicle via email that he had heard a rumor that the culprit may be a political rival looking to settle some scores. Lavigne also suggested reporters "quit believing everything market urbanists spew."

Planning and Zoning Department spokesperson Alina Carnahan downplayed any significance to the leaked document, which is dated June 2016. "This early draft does not include over six months' worth of work and revisions by the CodeNEXT staff," she said, noting that CodeNEXT's draft is officially due Jan. 30, thereby triggering months of public engagement. And whether its leak, and @arboratx's foreboding predictions regarding CodeNEXT, will color the public engagement process remains to be seen. Plenty of opportunity should exist for friends and foes alike to let the city and its CodeNEXT consultant, Opticos Design, know how they feel about the proposal. On Wednesday, Jan. 11, Carnahan, her boss Greg Guernsey, and Opticos reps Peter Park and John Miki presented to a joint meeting of Council and the Code Advisory Group their multipronged plan to canvass opinions across the city.

That plan includes digital tools such as apps and websites, as well as a rich stew of various meetings, including those on the citywide and district levels. Staff also will conduct weekly office hours during which residents can show up at different locations to discuss the proposed changes to the land development code in a one-on-one setting. Council Members Pool and Ann Kitchen provided the only pushback to the plan, requesting that there be even more meetings featuring different combinations of stakeholders, such as neighborhoods along shared district borders.

Alter raised concern that, according to the official timeline, the CAG's work as a formal body will end after the release of its final public feedback report in June. That complaint has been raised before by CAG members at previous joint meetings with Council, and the staff response given to Alter was just as familiar: CAG members will continue to act as public resources as both the Planning Commission and the Zoning and Platting Commission begin formal deliberations on the CodeNEXT draft. Once those groups are finished, the draft will make its way to City Council by December, with a final vote still expected as early as April 2018.

Closing the meeting, and in a statement that seemed to pre-empt concerns of the preliminary draft's leaker, Mayor Steve Adler classified CodeNEXT as "a chance for the entire community to come together to leave this city in a much better place than it's in right now. This is not a win-lose exercise that we're going through right now."

Adler added, "We really do want to have the community engaged and involved in this."

A version of this article appeared in print on January 20, 2017 with the headline: Can’t Hardly Wait