Lege Lines: Off the Rails Already 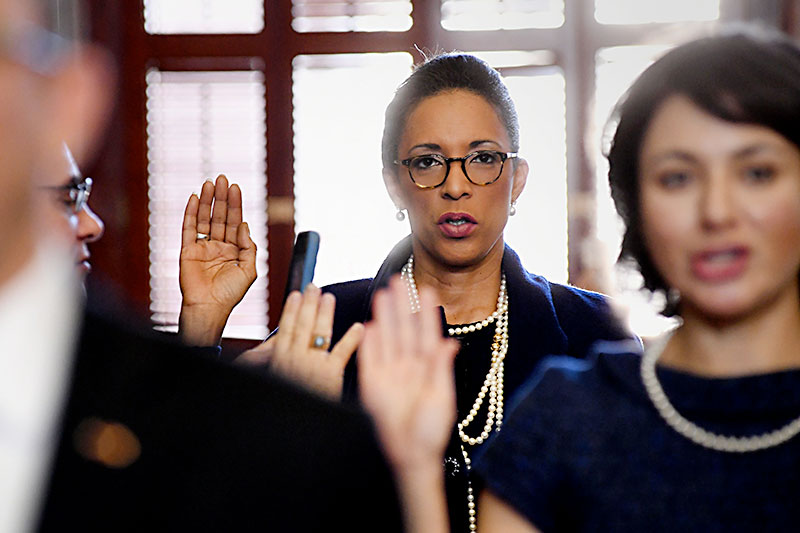 The 85th Texas Legislature has arrived – not with a bang, but with broad smiles and warm handshakes. It's not likely to end that way.

This year's session began midday on Tues­day, Jan. 10, with the standard opening day speeches, pledges, and reunions. On the House floor, it was the normal conviviality as lawmakers reintroduced themselves after the interim, and conducted a stress-free opening with little drama. San Antonio Republican Joe Straus returned as Speaker, with a unanimous vote and nominating speeches that stretched from an old opponent in his own party (Rep. Mark Keough, R-The Woodlands) to a ranking Democrat (Rep. Poncho Nevárez, D-Eagle Pass).

The unanimity reflected broad support of Straus as a consensus builder, and his own acceptance speech emphasized areas on which it seems the bipartisan majority of the chamber will find common ground. While still pledging fiscal conservatism, Straus laid out a three-point priority agenda: reforming and strengthening child protective services, strengthening the commitment to mental health provision, and – even without the pressure of a court ruling – an overhaul of the state's failing school finance system. He presented all three as wise investments and moral necessities, and made it clear that he plans to find bipartisan solutions. "Compromise [is] a good word in this House," he said.

That statement stood in clear contrast to positions struck across the Dome in the Senate chamber. There, Lt. Gov. Dan Patrick has already committed himself to a blood-red conservative agenda. So while Straus has been emphasizing issues like ending kids sleeping on Depart­ment of Family and Protective Services' office floors, Pat­rick's focus has been on support for a transgender bathroom bill. With Patrick also touting issues, such as school vouchers, that will likely gain little traction in the House, the two chambers seem poised for an epic game of legislative chicken.

Yet those are fights to come, and so with little drama on the dais, all eyes in the House were on one desk: Dawnna Dukes'. The embattled Travis County Dem (currently facing an abuse of office investigation) had announced months ago that she was retiring on opening day due to health problems, but on Saturday (Jan. 7), the Austin American-Statesman reported that Dukes had informed Travis County District Attorney Mar­garet Moore that she would not be stepping down. Dukes then confirmed this three days later via email to the Texas Tribune. At a brief press conference on Tuesday, she told reporters that she was staying in her seat to continue work on child protective services. That's an issue near and dear to Dukes' heart; her daughter is adopted.

She left the Chamber guessing right up to the last second. Turns out Dukes had informed neither state Dem­ocrats nor the local party – nor the rest of the delegation – of her change of mind, and no one was really sure whether she would show up or not. Dukes' Capitol office was locked and dark, and her seat empty in chambers when the session gaveled in. She finally appeared just in time to be sworn in, before disappearing for a press conference, and returning to vote for Straus.

Her reversal throws a wrench in the plans of those who had announced to replace her through special election. Former Workers Defense Project board chair Chito Vela spent the weekend calling for Dukes to stand by her pledge to step down, while former Austin Mayor Pro Tem Sheryl Cole said on Tuesday that she remained "all in" to run for Dukes' House District 46 seat – whether in a special election this year or in the 2018 Democratic primary.

Of course, they could still get that special election. Not long after the House gaveled out for the day, D.A. Moore announced plans to take the case against Dukes before a grand jury. Moore told the Chronicle on Wednesday that Dukes' case should be heard on Tuesday (Jan. 17). "The Rangers will present their evidence, and we will present our interpretation of the law." Moore said.

Not long after the House gaveled out for the day, D.A. Moore announced that next week she will take the case against Dukes before a grand jury.

Which all remains a distraction from the business of the Travis County delegation, though there are still opportunities for them. For example, Rep. Donna Howard, D-Austin, is one of the names touted as a possible vice chair of the vital House Appropriations Committee, alongside Rep. Helen Giddings, D-DeSoto, and Rep. Oscar Longoria, D-Peñitas. However, the city of Austin may have set a series of land mines for the delegation. Republicans have filed bills targeting several positions adopted by City Council – the plastic bag ban, increased rideshare regulation, and the tag of being a sanctuary city – that local Democrats will have to spend time and legislative energy defeating.