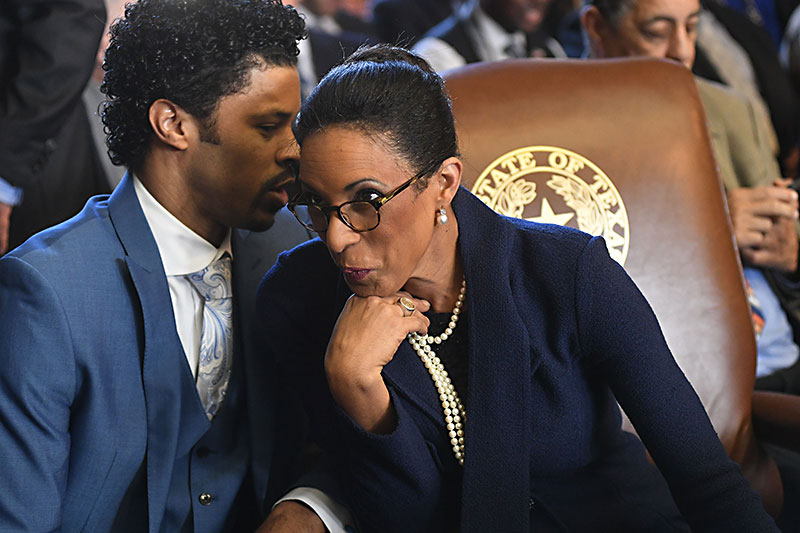 Texas' 85th Legislature opened session Tuesday, and locally, all eyes and ears were on Dawnna Dukes, D-Pflugerville. The state rep had announced months ago that she would resign on the first day of this session, but shocked the state Saturday when news broke that she would instead serve her House District 46 constituents through the five-month session. Dukes was in and out of opening day proceedings. Later that afternoon, Travis County District Attorney Margaret Moore announced that she plans to take charges that Dukes abused her power in office to a grand jury next Tuesday. (Photo by John Anderson)

Texas Gun Sense held a series of special events Wednesday at the Capitol and elsewhere to educate legislators and others about the ongoing threat of irresponsible gun use and gun violence. Speakers included state Sens. José Rodríguez and José Menéndez, Rep. Joe Moody, and Austin Rep. Gina Hinojosa. More information at www.txgunsense.org.

Travis County reported its first case of congenital Zika virus in an infant on Jan. 4. The case is likely not locally contracted, says Austin Public Health, rather derived from a mother who emigrated from Central America in August. All 20 residents that tested positive for Zika in Travis County suffer from travel-associated infections. Nearly 300 cases of the illness have been reported in Texas so far.

Lt. Gov. Dan Patrick said this week he will run for re-election in 2018 and not try to unseat Gov. Greg Abbott, so long as his "conservative partner" holds the office. The right-wing former radio host has held his current post since 2015.

The American Phoenix Foundation, the right-wing group that tried to secretly film Texas lawmakers last session, is to be shut down under orders of District Judge Suzanne Covington. The group was founded by Joe Basel, who's infamous for trying to hide a camera in Louisiana Senator Mary Landrieu's office in 2010.

Endeavor Real Estate Group's much-anticipated Plaza Saltillo Transit Oriented District proposal hit the Planning Commission Tuesday, with Endeavor now proposing both more height, and less affordable housing, than were reported to be in their proposal when it won a competitive bidding process in 2014. PC passed the plan on to City Council with several suggested amendments, on a split vote.

The Austin American-Statesman announced Friday that its owners, members of the Cox family who purchased the paper from Cox Enterprises in Dec. 2015, have entered into an agreement with Endeavor to redevelop the tract where the newspaper plant now sits, at the south end of the Congress Avenue Bridge. The tract is a centerpiece of the South Central Waterfront Plan developed over some years in conjunction with the EPA and passed by City Council with much fanfare last summer. The project's attorney Richard Suttle called that plan a "good starting point," but told the daily of the development plan: "It'll be a long process of evaluating and planning."