What’s Next for CodeNEXT? 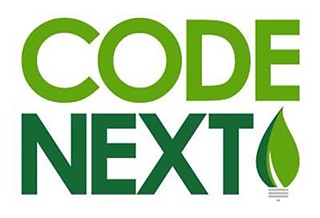 The beginning of the new year means that Austin's next big policy battle can open in earnest. Staff and stakeholders have been preparing to launch CodeNEXT – the long-delayed rewrite of the city's land development code – since 2012. At the end of January, the public is scheduled to get its first look at the draft version of the new code, whose long road to formal adoption (expected in the spring of 2018) promises to bring to the fore Austin's age-old turmoil over density, preservation, and how to manage its exuberant growth.

Before that draft drops, however, CodeNEXT's timeline will raise two significant prongs that could attract a healthy amount of scrutiny in the months ahead. First, on Jan. 9, the Land Development Code Advisory Group – the group of residents tasked with channeling public input into and out of the ongoing process – will discuss potential mapping strategies. As it stands now, the big-picture map of how new zoning categories will apply to each parcel in the city limits won't be revealed until later this spring. In the meantime, city staff will unveil sample zoning maps for several to-be-determined areas, a strategy that city spokesperson Alina Carnahan acknowledged may feed a feeling of suspense. "It's going to make a lot of people nervous wondering whether we're going to completely change the zoning on their property or not," she said.

Carnahan did stress that planners will be open to tweaking the draft code or the proposed zoning map based on public input. To that end, next week's third joint meeting between the CAG and City Council – scheduled for Jan. 11 – will likely play a major role in establishing the tone of talks to come.

The object of the joint session will be the public outreach plan. Carnahan said the general idea is to have parallel efforts conducted by city staff and the CAG. Based on the current timeline, the latter will essentially dissolve as a group after submitting its final report in June. At previous meetings, some members have expressed interest in extending the body's life for several more months in order to continue its public feedback work while both the Planning Commission and the Zoning and Platting Commission begin their work on the draft code.