The biggest stories from local cops, courts, and criminals 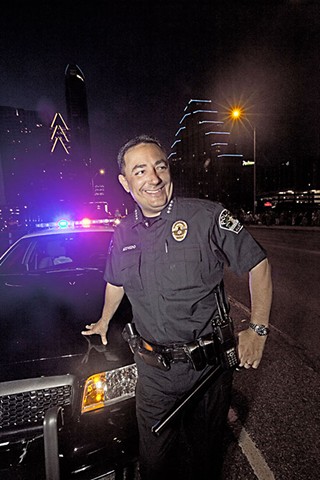 1) Crime Lab Shutdown Longstanding malpractice at APD's forensic lab led to a June shutdown that continues to stall the prosecution of many high-profile criminal cases and bring hundreds of past convictions into question. In mid-December, Interim Pol­ice Chief Brian Manley reported that APD will no longer retain control over the local lab.

2) David Joseph Shooting Everything at APD changed on Feb. 8 when Geoffrey Free­man fatally shot 17-year-old David Joseph in a Northeast Austin street while Joseph, naked and unarmed, ran toward the officer. The fatal shooting triggered training inquiries, reignited debate over patrol protocols, and opened a rift between Chief Art Acevedo and the police union that in November contributed to his accepting a job in Houston.

3) Acevedo Out We can't blame the chief for taking the same job in Houston. The Bayou City is the nation's fourth largest, with a police force of 5,200 officers – three times the size of APD, with a hefty salary bump to boot. After nine-and-a-half years in Austin, however, his late-November departure left a crater in the local policing community.

4) Norwood Convicted Mark Norwood, 62, was convicted in September for the 1988 murder of Debra Baker and sentenced to life in prison – his second; in 2013, he was convicted for the 1986 murder of Christine Morton. September's jury verdict seemingly closed the books on two longstanding cases.

5) Breaion King's Arrest King's arrest occurred in June 2015 but didn't hit the public eye until July of this year, when the States­man published dash-cam footage of two APD officers issuing an unnecessarily violent takedown of the young black schoolteacher.

6) What Happened to Executions? The state killed seven people in 2016, Texas' fewest in 20 years. Nobody was executed after April, bringing into question whether the most execution-happy state in the country is really all that execution-happy anymore.

7) Body Camera Snatchin' APD was supposed to deploy 500 body cameras to Downtown officers in September. That rollout got rolled back, however, when Utility Assoc­iates filed a lawsuit against the city alleging that people in Purchasing agreed to work with Taser International too quickly. The city's impending policy is still gummed up in the courts, with no adjusted deployment date listed whatsoever.

8) Freeman Settles The Austin Police Association said all along that it had a case to win Geoffrey Free­man his job back, and on Dec. 2 they were proven partially right, when the city announced it had reached a $35,000 settlement agreement with Freeman to avoid arbitration – and ensuring that the officer won't return to patrol in Austin.

9) Moore Restructures Shortly after her election, incoming District Attorney Mar­gar­et Moore told everyone in the 238-person agency that they'd need to reapply to the office if they wanted to keep their jobs – 48 employees will be jettisoned in January when Moore takes over. The new D.A. – only the third in 40 years – will open with a revamped structure built around five major units.

10) In-Person Visitation Restored April marked the first time since 2013 that inmates at the Travis County Correctional Complex were able to communicate with their loved ones face-to-face through Plexi­glas panes – and not the video conference terminals installed by a for-profit company.