The best from this year's dais 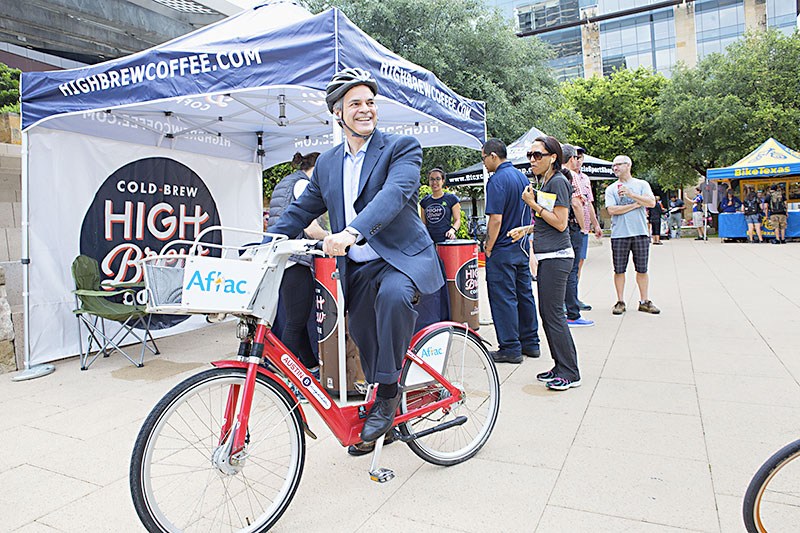 Mayor Steve Adler bikes to work on Bike to Work Day in May. (Photo by Jana Birchum)

1) Just Don't Call It "Sharing" As Mayor Steve Adler put it, the citywide public argument over "ridesharing" "sucked all the oxygen out of the room." In May, after two years of wrangling and several months of City Council hearings, petitions, and an explosion of campaign spending, Uber and Lyft were defeated at the polls.

2) Austin Moves On In a risky decision to sell a major transportation bond on short notice and uncertain Council support, Mayor Adler arm-twisted a $720 million "Go Big" Mobility Bond – then convinced the voters to endorse the expensive package. Now the roads need to meet the rubber.

3) Attack of the PUDs No, not "people-eating underground dwellers," but "planned unit developments" that spring up all over town and devour Council time and debates like so much buttered popcorn. The two big ones this year were Pilot Knob and the Grove at Shoal Creek – Austin Oaks soon to follow.

5) Deep in the Grove The Grove at Shoal Creek also garners a Top 10 highlight, as the PUD roiled neighborhood listservs, land-use debates, and Council maneuvering for roughly two years. It was approved by Council on Dec. 15.

7) Satan Says Hello His Satanic Majes­ty didn't make a personal appearance, but CM Zimmerman attempted (as a prank) to smuggle him into a Council resolution on tolerance, and then took the bait in panic when the Satanic Temple was scheduled for an invocation (postponed). Who will protect us now?

8) Less Than Total Recall After Uber and Lyft targeted District 5 CM Ann Kitchen as the sponsor of regulations they disdained, Kitchen became the target of a petition recall effort by right-wing groups that foundered when they failed to follow campaign rules. Better luck – or brains – next time.

9) You Look (Almost) Familiar The first re-election campaign under 10-1 produced a mixed result – the return of CMs Delia Garza, Greg Casar, and Leslie Pool, but defeat for Don Zimmerman by Jimmy Flan­nigan, and Sheri Gallo by Alison Alter. We'll learn the effects on the dais in 2017.

10) Ott In, Ott Out After the 2014 election, City Manager Marc Ott seemed to be a short-timer, after several Council candidates ran on a City Hall clean-out. But Council huffed, puffed, and punted. Ott survived into 2016, even garnered a raise and Council vote of confidence – prior to confirming his departure for a D.C. directorship.