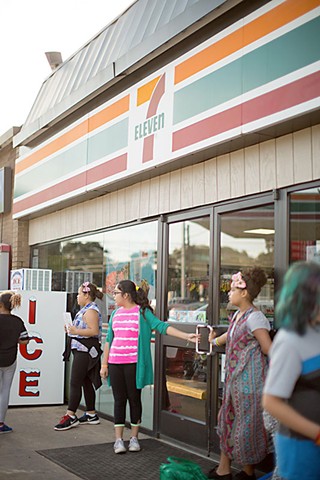 Students line up outside a 7-Eleven to promote healthy eating. (Photo by Shelby Knowles)

A banner that reads "Where Everybody Is Somebody" hangs in the corner of Cun­ning­ham Elementary gymnasium, where students gather for their end-of-the-week assembly. The day concludes with a schoolwide chant and students beaming with excitement for the weekend. Some head to their crossing guard posts; others hop into cars with their parents. One small group prepares for a nontraditional field trip to a nearby 7-Eleven.

Sarah Tanguy, president of the Parent Teach­er Association at Cunningham, walks the group of fifth graders to the store. The kids are participating in the Healthy Corner Store Initiative run by the local nonprofit GO! Austin/¡VAMOS! Austin – often referred to as GAVA. The students greet incoming customers and tell them about the healthy options offered. In 2015, GAVA launched the initiative as a way to build relationships between the corner store owners and residents, and to promote accessibility to fresh foods in the 78744 and 78745 ZIP codes.

Diana Castro, another Cunningham parent, stops by the 7-Eleven to pick up some snacks for her three kids. She says the healthier options help busy moms like herself: The store "gives me more choices when I'm on the run," she said. "Now there are healthier options versus chips and a Slurpee. The kids help draw attention to the store's revamped food options. One customer, who identified himself as G. Fox, said the kids approached him with a brochure upon his entrance: "I tested the samples and really liked the options." Fox, who lives in North Austin but commutes to the Southeast, was recently diagnosed with borderline type II diabetes. Having healthy food options is now a top priority. "Promoting healthy foods at 7-Eleven is a great idea," he said. "It will help those who don't have a healthy body put healthy foods in them so they can have a healthier life."

Go! Austin/¡Vamos! Austin focuses its efforts on both the area around Cunningham Elementary – located on Manchaca Road, between Stassney Lane and William Cannon – and neighboring Dove Springs, a predominantly lower-income, Latino neighborhood in Southeast Austin. Nearly 65% of the students at Cunningham are considered economically disadvantaged and receive free or reduced-price school lunches (about average for AISD schools). In 2015, according to the city’s Office of Sustainability, roughly 1 in 4 Dove Springs residents were considered food insecure because they lacked access to enough food for all household members.

Even though Dove Springs is located in the second most populous ZIP code in Austin (78744), the neighborhood still lacks a full-service grocery store. In response, Austin nonprofits, including GAVA and the Sus­tain­able Food Center, began looking at the area to offer solutions. In the ’45, Cunning­ham hosts initiatives from both: GAVA offers the Healthy Corner Store program, and the Sustainable Food Center helps residents with a weekly food stand that provides fresh, reduced-price produce.

"I see [farm stands] becoming a part of what schools do," said the Sustainable Food Center's Simone Benz. "They are such a great resource for families; why not be a point of access for healthy foods, too?"

The growing number of healthy food initiatives has teachers using produce as a learning tool, according to Amy Lloyd, the Cunningham principal. "The kindergartners were comparing the size of fruits and vegetables to the size of their heads," she said. "The concept of large and small, greater than or less than, is a kindergarten concept. So you could do that with blocks, or you can do that with fruits and vegetables."

In 2015, the elementary school piloted SFC's afterschool, on-site farm stand program, where parents, children, and local residents could buy fresh produce from a pop-up stand run by other parents. Due to the high demand for fresh produce, SFC launched two more weekly farm stands in October and November, at the Dove Springs Recreation Center and Odom Elemen­tary School.

Even though Dove Springs is located in the second most populous ZIP code in Austin, the neighborhood still lacks a full-service grocery store.

Tanguy became actively involved at the school and in the PTA when her daughter, Emma, was in kindergarten. Now, six years later, she leads her daughter's Healthy Cor­­ner Store Initiative field trip, helps SFC set up the farm stand, and encourages other parents to participate in the programs. She appreciates the increased attention to Cun­ning­ham, but in the last few years has also watched healthy programs come and go as if they are in a revolving door. "We are an experimental school that tries a lot of different healthy initiatives, but programs don't always stick," said Tanguy. "We are always trying to get families to come and participate, but it's challenging because a lot of our families are single-parent families or both parents work."

Principal Lloyd remains confident, regardless of parent participation. "We have parents that don't need any assistance, others that do," she said. "They are all involved because the bottom line is they all want their kids to have healthy foods and grow up healthy. It doesn't matter what background you have or where you are in your economic life. But it does matter that you care about your kids. It has been a unifying factor for our campus."

This story has been updated to clarify a few geographical discrepancies concerning the location of Cunningham Elementary School and its proximity to Dove Springs.