No charges will be filed in ESP harassment and vandalism incidents

It didn't take long for the metastasizing "#pizzagate" fake news story to reach Austin. Credulous locals followed the manufactured allegations against the Comet Ping Pong pizza parlor in D.C. – that an entirely imaginary pedophile ring, involving Hillary Clinton, operated there – and decided to get in on the action. Wild and malicious rumors began circulating on Reddit and Facebook that East Side Pies was part of the international conspiracy, inspiring local lamebrains to film "secret" videos inside the restaurants (of people ordering pizzas, natch), to make threatening phone calls, and to vandalize one of the ESP delivery trucks. The FB "evidence" was both credulous and creepy, complete with exhortations to increase the harassment and "put their heads on pikes." (For the record, some of the accusations appeared to originate with the restaurant's logo and slogan, which plays on the acronym "ESP" – "We know what you want" – and features an all-seeing eye missing a pizza slice.) Austin Police said Monday that no charges would be filed for the harassment and vandalism.

To their enormous credit, ESP co-owners Noah Polk and Michael Freid have responded to the scurrilous attacks with grace – "You argue with the fool, you're the fool yourself," Polk told the Statesman – and by initiating an anti-bullying campaign in collaboration with Eastside nonprofit arts group Creative Action. Polk said that while ESP was still trying to determine how to respond to the slanderers, he was contacted by Mayor Steve Adler's office. "They said, 'We hear there's a crisis facing your business, and we're behind you 100 percent,'" Polk recalled. After some conversations, the mayor's staff suggested working with Creative Action, which helps inspire young people through involvement in the creative arts. Said Polk, "It seemed like a no-brainer."

Polk says there was a welcome spike in sales after the initial media frenzy, and that "two things have given me solace: Our own customers' support has been overwhelmingly great, and the online response to the harassment has been 99 percent positive."

For the new East Side Pies "Anti-Bullying Spec­ial," customers can add a dollar to the price of any pizza, and it will be donated to the anti-bullying efforts of Creative Action (www.creativeaction.org). East Side Pies is at www.eastsidepies.com.

A version of this article appeared in print on December 16, 2016 with the headline: If Life Hands You Pizzagate ... 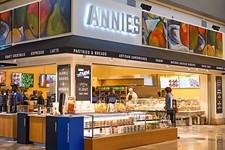 Alex Jones Apologizes!
Slander against politicians is one thing; against pizza shop owners, another