“Minimum Wage Is Not Livable”

Popeyes workers get paid owed wages, but fight far from over

Fight for 15 activists gathered Saturday for the second time in two weeks outside of the Popeyes Chicken on East Riverside Drive to protest alleged labor violations at the fast food restaurant.

The issue that first prompted demonstrations the week before had been resolved. Popeyes workers received the week's worth of wages that had eluded them for more than two weeks after new store management replaced traditional paychecks with a direct deposit system. Workers say management not only failed to pay them on time through the new system but also refused their requests to cut checks as they awaited belated payments. State law requires that hourly workers be paid at least twice a month; and that if workers are not paid on their designated payday, the employer must pay them immediately upon their request. Also, federal law is designed to protect workers from retaliation.

Despite payment, the tensions between workers and the restaurant are not exactly resolved, according to demonstrating employees and activists with Fight for 15. On Dec. 8, Popeyes employee Rosario Her­nan­dez filed an Unfair Labor Practices complaint alleging a manager had told her that she and others would be fired if they participated in a strike scheduled for Dec. 3. Ruben Alvarado, who says he works 50-60 hours a week between a job at Popeyes and one at Wendy's, told the Chronicle that he suspects that he is treated better than other workers because he speaks English and understands his rights on the job. "They're being told different things than I'm being told," he said of some of his co-workers, including Hernandez, who doesn't speak fluent English.

Amin Dhanani, president of Houston-based Z & H Foods, which owns the East Riverside Popeyes and more than a dozen other franchises in Austin (and more than 100 Popeyes nationally), told the Chronicle he respects the workers' right to protest. He attributed grievances to a "miscommunication," and noted two former employees who he says "are trying to stir things up." Their issues, he said, lie with the previous ownership, from which Z & H purchased the East Riverside franchise on Nov. 7.

One of those former employees, Jeymi Her­nandez (no relation), sees things differently. "I'm not the type of person who looks for trouble," said the 21-year-old, who worked as an assistant manager at Popeyes from January through November, making $9.25 an hour. She described a strike she helped organize in September in response to the previous owner's failure to fix a malfunctioning air conditioning system during the hot summer months as a practical means of improving working conditions. The strike achieved its intended effect, she said: Management became much more diligent about following labor laws after it ended.

“You might be scared to speak, but I’ll speak for you.” – Freda Lacy

Hernandez only worked one day under the current store management before she left for a new job at Unipago, a money transfer service. Her brother Miguel, a high school student, still works at Popeyes, however. Hernandez said she supports ongoing efforts of workers to stand up for their rights, but she told the Chronicle she's not convinced that a $15 an hour wage is feasible in every circumstance. "I do agree on getting a raise, obviously," she said. "Minimum wage is not livable." While she is able to live with her family as she works toward a college degree (she hopes to become a translator), she knows that others in this increasingly unaffordable city are not so fortunate.

The fast food industry has long been considered practically immune to union organizing due to high rates of employee turnover, which makes building an organization of workers difficult. The Fight for 15 movement has championed a different model of labor activism; one that focuses less on securing union contracts and more on engaging workers to improve working conditions and wages. While traditional union organizers might not bother with a workplace if they do not believe they can win a unionization vote from the majority of workers, the Fight for 15 movement sees value in getting even a vocal minority of employees active.

Freda Lacy, a 33-year-old single mother of four who attended Saturday's protest, jumped at the opportunity to get involved in the fight for higher wages when she was approached by organizers as an employee at Taco Bell. She said many of her co-workers, particularly undocumented immigrants, were hesitant to challenge management. When she walked out on her job as part of a national fast food workers strike last year, Lacy was only able to get one co-worker to follow – and that colleague got cold feet and went back inside, Lacy recalls. She understands why other workers are scared to participate. That makes her participation more important, she said: "You might be scared to speak, but I'll speak for you."

The Fight for 15 movement has found support among Democratic political leaders across the country, and has led to a number of major minimum wage increases in New York, California, and Seattle, among other liberal cities and states. In the wake of a disastrous election result that many progressives have blamed on the party failing to connect with concerns of the working class, it is likely that there will be even greater enthusiasm among left-leaning political leaders to embrace the push for higher wages. City Council Members Greg Cas­ar and Delia Garza have both shown their support at recent fast food worker demonstrations. On Saturday, CM Sabino Renteria was present at Popeyes. He told the Chronicle that low wages were unfair to workers and the taxpayers who bear the cost of covering the social services that low-wage workers and their families rely on. 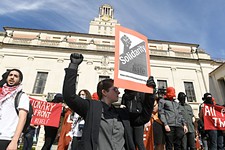