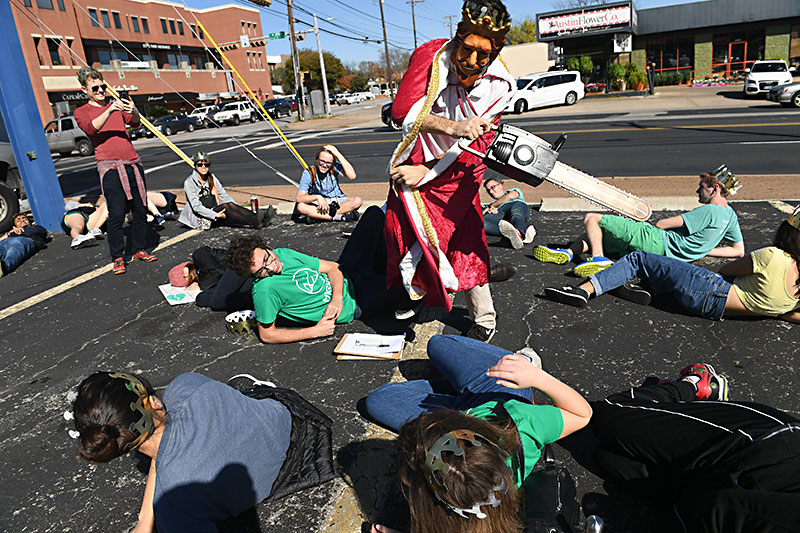 Demonstrators stage a mock deforestation on Tuesday in front of the Burger King at 35th and Jefferson as part of a protest against the fast-food chain's ties to global deforestation. (Photo by John Anderson)

City Council closes out 2016 today (Dec. 15) with no less than a 101-Item agenda, entirely dalmatian-free. The Grove returns for greater scrutiny and (perhaps) a final vote, and the Austin Oaks PUD arrives for an evening hearing. And there's "biosolids" ... See "Council: From Kitty Hawk to Hornsby Bend," Dec. 15.

Austin Police Monitor Margo Frasier announced she's retiring in January after six years spent watching over operations at APD. The former Travis County sheriff had long said she wanted to retire before the Austin Police Association enters into bargaining for its next meet-and-confer agreement with the city.

Cameron Caldwell, the cop suspended from APD for 45 days in August for pepper-spraying a man who'd already been detained and arrested on Sixth Street, was no-billed by a Travis County grand jury on Thursday, Dec. 8.

The Centers for Disease Control has granted Texas $5 million to combat the Zika virus. The state health department has pledged $18 million to do the same. The federal award, via supplemental funding from Congress, comes at an opportune time: Late last month, the state reported its first local transmission case of the virus, discovered in the Rio Grande Valley. Since then, four more cases have been reported.

The Trump camp has reportedly tapped its first two Texans to be part of the presidential cabinet. Exxon Mobil CEO Rex Tillerson is in line to be Trump's secretary of state. The UT-Austin grad and oil businessman has virtually no diplomatic or foreign policy experience, making his qualifications in sync with other Trump cabinet appointees.

Speaking of unqualified, former Gov. Rick Perry has been named Trump's nominee for secre­tary of energy. On the campaign trail in 2012, Perry said he wanted to eliminate the Department of Energy.

Pflugerville ISD Superintendent Alex Torrez has been unceremoniously ousted. Torres announced Dec. 7 intentions to retire in September, but on Dec. 12 the board placed him on administrative leave. Deputy Superintendent Troy Galow is currently overseeing operations over the school district.

The suspect in an unsolved Austin murder has been added to the FBI's Top 10 Most Wanted Fugitive list. Robert Francis Van Wisse, 51, is accused of murdering Laurie Stout in 1983.

No Christmas surfing in Central Texas: After draining their artificial lagoon for repairs, reportedly flooding surrounding streets in the process, the 14-acre NLand Surf Park in Del Valle announced this week it will remain closed into 2017.