Alison Alter celebrates making it into the District 10 run-off at her November election party at Santa Rita. (Photo by David Brendan Hall)

"I'm very excited and honored to be entrusted with [the] responsibilities to represent District 10," Alter, a philanthropic adviser, told the Chronicle. She thanked Gallo for her service and she said she looks forward to working with the outgoing council member, her fellow officials on the dais, and "the residents of District 10."

Alter's victory can be seen as an upset in what was a hotly contested race. Gallo appeared the front-runner after November's election, when she earned 48% of the votes to Alter's 36%. (Challengers Nick Virden and Rob Walker grabbed a combined 16%.) Yet the incumbent couldn't keep her campaign above water as she fielded a number of accusations from oppositional PACs in the lead-up to Tuesday's run-off. Gallo faced outspoken criticism since the start of the race for allegedly catering to special interests instead of the needs of the neighborhood – an indictment grounded in her work on the Grove at Shoal Creek and Austin Oaks PUDs, which ultimately proved fatal to her chances at retaining her seat. Gallo only mustered 5,315 of the combined 14,757 votes cast, as voter turnout finished at 22.3% of registered voters.

"The election provided a clear indicator that people want to shape our growth as much as they can," Alter said the morning after her win. "That they value the city that we are and that they want to grow in ways that are consistent with what we love about Austin."

Nitsch, Hassan to the Board at ACC

Sosa has held the ACC Place 6 seat since 2010, and originally announced she planned to retire this year. However, when Place 9 incumbent Allen Kaplan announced he was retiring with two years left on his six-year term, Sosa filed to replace him. Her ousting by Nitsch may be a shot across the bows of establishment progressives: Sosa is a longtime Democratic mainstay, while Nitsch has that Sanders tie. 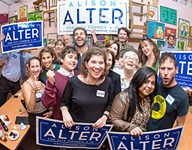