The Grove, Oaks, and Austin Water In between 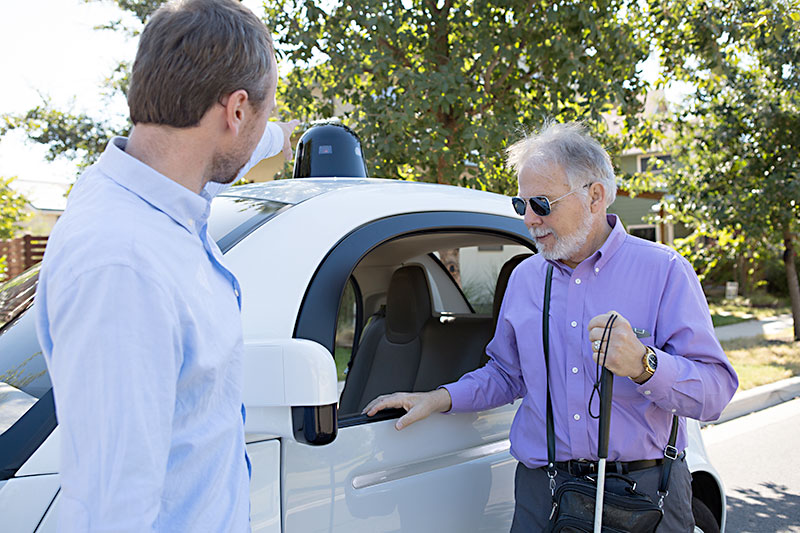 If you felt a disturbance in the force last Oct. 20, it might not have been your imagination. Google announced this week that on that date, "Steve Mahan, former CEO of the Santa Clara Valley Blind Center, was first to drive on Austin public roads in a fully self-driving car." Mahan is legally blind, and rode (on an unspecified route somewhere in North Austin) "alone in a prototype vehicle with no steering wheel or pedals."

Mayor Steve Adler shared that exhilarating (or alarming) news with his City Council colleagues at Tuesday's work session, and in a press release declaring, "Austin is the Kitty Hawk of driverless cars. We should all be proud that our creative and innovative city is where such a huge leap forward can take place."

And if your heart doesn't leap quite that historically high at learning those Google cars already roaming your neighborhood might soon be entirely out of human control, Adler's Council colleagues appeared to share your lack of enthusiasm. That might not have been just technological skepticism – the daunting prospect of today's (Dec. 15) final meeting of 2016, and its 101-Item agenda, immediately yanked them back to attention.

Will they avoid a post-midnight marathon? Too soon to tell. But judging from the work session (with briefings lasting into the after-noon), they've got mucho to do. Although they were shorthanded – absent were District 6 Council Member Don Zimmerman and D10 CM Sheri Gallo (probably visiting polls); D8 CM Ellen Troxclair arrived late – they wrestled with several matters that might lengthen today's deliberations. Here are a few agenda highlights:

• Grove to the Max: If you thought last week's second reading, featuring the just-announced agreement between the Bull Creek Road Coalition of nearby neighborhoods and developer ARG Bull Creek Ltd. marked the final lap on the Grove at Shoal Creek planned unit development ordinance – think again. There are no less than five Items (29, 30, 31, 75, 100) bearing on various elements of the Grove, so much tinkering may be in play. Several council members – Greg Casar, Delia Garza, Mayor Pro Tem Kathie Tovo – suggested they'd like to see more affordable housing in the final project, and are looking for ways to get there. The current number is 138 affordable units (rented or owned, at 60% or 80% median family income), and Casar shared a matrix of possibilities that might involve either more city Housing Trust Fund money or more commercial space to get the number to 160 or above. His proposals evoked cautions from CM Leslie Pool, reiterating last week's witnesses, who said tweaking single elements of the mediated deal might scuttle the entire agreement. Garza responded curtly that the city was not a party to the mediation, and said Council still needs to make its own judgment. (Adler seemed to default to a middle ground, but supporting the agreement.) The public hearing is closed, but whether Casar's amendments have sufficient traction on the dais to alter the deal – and what the consequences might be – should be revealed today.

• From the Grove to the Oaks: The Austin Oaks PUD, also in District 10 (just west of MoPac at Spicewood Springs) has also been simmering for nearly two years, and finally reaches Council for a public hearing today. The "time certain" is 6:30pm, with the mayor saying he'll do his best to clear the decks during the day to get to the hearing in good time (hope springs eternal). The PUD has gone through several iterations from its initial design, and has less united opposition than did the Grove from nearby neighborhoods – but emotions still run high, and it won't be an easy sell. Today, the witnesses should lay out the range of arguments, before a possible first reading only – expect much more in 2017.

• About Those "Biosolids": The agenda is contract-heavy (by rough count, more than three dozen of various sorts), likely to trigger plenty of raised red pencils on the dais, especially by Zimmerman and Gallo. It's impos­sible to predict which department heads get grilled about the financial details, but our favorites on the contract list remain Items 52 and 53, the much postponed Austin Water deals for management of compost and biosolids produced at the Hornsby Bend plant – backstage disputes among potential contractors have held this one up for months.

Above and beyond all this, there are nearly 30 unresolved (and much postponed) zoning cases, although Planning & Zoning Department Director Greg Guernsey told Council Tuesday, "It's not as bad as it looks," and suggested that quite a few of the cases may be handled on consent. (The long-contentious Plaza Saltillo debates, for example, may have reached a resolution.) And the generally uncontroversial, largely reflexive fee waivers for many special events might also hit a speed bump: Both The Vagina Monologues (a SafePlace fundraiser) and the SXSW Festival are in line for waivers or adjustments, and could draw dais fire (or posturing).

Certainly, by 5:30pm, you'll be ready for a healthy dose of Ro-Tel and the Hot Tomatoes, today's musical honorees. We'll all have earned it, with hours to go before we sleep.