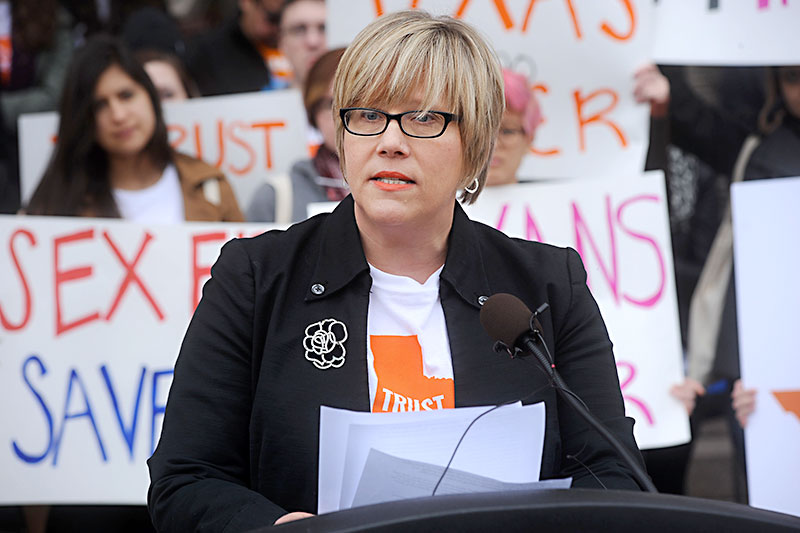 The Center for Reproductive Rights, representing a group of abortion providers, filed a lawsuit against the state of Texas on Monday to block a new state health department rule that forces women to bury or cremate their fetus or embryo after an abortion or miscarriage, regardless of gestation period. The CRR, which led the legal fight against Texas' omnibus anti-choice House Bill 2 to the U.S. Supreme Court in March, says the fetal burial rule represents another attempt by the state to restrict women's access to abortion care by increasing the burden of cost and casting stigma and shame around the medical procedure. The rule stands in "direct defiance" of this summer's SCOTUS ruling in Whole Wom­an's Health v. Hellerstedt, which mandates that states can only pass abortion laws that actually advance public health.

"These regulations are an insult to Texas women, the rule of law, and the U.S. Supreme Court, which declared less than six months ago that medically unnecessary restrictions on abortion access are unconstitutional," said Nancy Northup, president and CEO of the Center for Reproductive Rights. The suit, filed in U.S. Judge Sam Sparks' federal court, names many of the same figures as those involved with the Whole Woman's suit: CRR, and Austin attorneys Jan Soifer and Patrick O'Connell of O'Connell & Soifer. The legal team represents Whole Woman's Health, Brookside Women's Medical Center, Austin Women's Health Center, Alamo Women's Repro­duc­tive Services, and Dr. Lendol Davis.

CRR drew parallels between the new regulation and HB 2, writing that it "employs precisely the same tactics" as the now struck part of the law that forced physicians to secure admitting privileges at a hospital within 30 miles of where the abortion is performed. Both rules compel providers to "maintain a fragile, medically unnecessary third-party relationship," without which they could face closure. Provid­ers say they're only aware of one facility in the entire state willing and able to provide cremation services at a price that is comparable to their current disposal costs. Since no other state health department regulation or state law similarly requires health care facilities to follow particular methods of human remains disposal, the state is unfairly targeting abortion providers.

Unlike HB 2, the rule rests on thinner ice when it comes to showing any purported health and safety benefit. Not only has the state provided zero evidence that the fetal burial rule would promote public health – a requirement established in this summer's SCOTUS ruling – lawmakers have publicly shown their true intentions. Calling abortion providers "soulless," Gov. Greg Abbott fundraised off the rule earlier this year. Not mentioning women's health or safety at all, Abbott said the purpose of the regulation is to show "respect for the sanctity of life" and "protect human dignity." Similarly, HHSC Commissioner Charles Smith wrote in July that the rule was meant to fall in line with Abbott's "commitment to protect unborn lives" – again, nowhere does he refer to public health as the main objective.

In addition to the cost burden providers and patients would experience as a result of the rule, women would have their moral agency and privacy compromised, CRR contends. The imposition on women's "autonomy and invasion of their privacy will also harm women spiritually and emotionally, causing trauma, guilt, shame, anger, and feelings of exploitation and violation ... and will ultimately increase the stigma surrounding abortion and miscarriage in Texas." While the health department changed up language as it relates to issuing fetal death certificates, CRR notes they would still require a certificate for a fetus that is 350 grams or more, or at a 20-week or higher gestation period, which would result in disclosing personally-identifying details without consent, "an unprecedented invasion of women's privacy." Further, says CRR, it could threaten the safety of women who wish to keep their abortion confidential from abusive family members.

The New York-based legal group is asking Sparks for a temporary injunction to stop the rule from taking effect as scheduled on Monday, Dec. 19.

A version of this article appeared in print on December 16, 2016 with the headline: Hellerstedt, Pt. II