While Sunday's denial of the permit that would have allowed Energy Transfer Partners to continue construction through a pivotal part of the Dakota Access Pipeline in North Dakota represented a national victory for anti-pipeline activists, a group of Native American veterans from Texas wasted no time celebrating, instead gathering early Monday morning for a press conference to continue their own fight for water rights and the protection of sacred land.

Seven organizers stood in the rain outside the Moody National Bank tower on 15th Street, which houses several state agencies for veterans and office space for Energy Transfer Partners – constructors of the Dakota Access Pipeline as well as the Trans-Pecos and Comanche Trail pipelines, two similarly contentious oil tubes running through West Texas. "We won this fight in Standing Rock, but Texas is being plagued with the same issues," declared Jessie Manciaz, a member of the Carrizo/Comecrudo Tribe of Texas, who received two Purple Heart medals as a Marine staff sergeant in Vietnam.

"When we signed up to serve our country, all us veterans knew that this promise and pledge didn't have an expiration date," said Manciaz, denouncing the West Texas pipeline that he believes traverses native sites and threatens to pollute natural waterways. "That's why I'm here. We're still defending our country; we're defending our families; we're defending our land and our water. … It's important to us because these lands are sacred and this water is sacred to us. Oil is a convenience, water is life."

Carrizo/Comecrudo chairman Juan Mancias decried a lack of tribal consultation in various Texas energy projects. "The continued denial of the presence of native tribes in Texas is just what they do," he charged. "They say we're extinct. We're not, and we still speak our language!"

Indigenous rights activist Tane Ward rolled out a litany of Texas energy ventures and related environmental concerns. "The Trans-Pecos Pipeline has been reported to destroy one archaeological site for every one mile of its construction," he said. "There's also the liquefied natural gas export terminals in Brownsville, which threaten an archaeological remain called Garcia Pasture. Then there's the Dos Republicas Coal Mine in Eagle Pass, which the Army Corps of Engineers granted a permit for without doing proper tribal consultation. We feel that the Dakota Access Pipeline fight sets a precedent that they need to revoke the permit for that coal mine. These are all threats to native people – they are threats to our water."

The conference culminated with organizer Fox RedSky, a female Native American military veteran, leading the group to the ETP office to "peacefully extend ourselves in communication." The company's administrative staff locked the door prior to the veterans' attempted entrance and summoned a security guard and building manager, who called Austin Police and threatened the veterans with arrest.

"We want the police to arrest the executives of Energy Transfer Partners for their continued crimes against humanity, specifically violence against peaceful protesters," Ward retorted, before the group exited the building. Responding officers issued no citations. 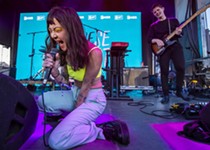