“It’s the Rio Grande. It’s sacred to many people." Shortly after 4am on Monday, a small caravan of cars pulled up in front of a pipe yard on the west side of Alpine, Texas – until recently, a rare sight in this remote corner of the state. In the morning dark, Alpine resident Lori Glover clamped a U-lock around her neck and chained herself to an access gate. Roger Siglin and Arah Joe Battista did the same at other gates. Supporters gathered around and lit candles. They burned sage in a spirit of prayer and sang popular protest songs like "This Land Is Your Land" and "We Shall Overcome." That's when the Pumpco, Inc., employees began to arrive.

"They were stirred up like a nest of hornets," Glover's husband, Mark, told the Chronicle by phone. "They were going to each gate and peeling out and driving back and forth."

It took a succession of bolt cutters to free the trio from the gates, said Mark, before Lori, 44, and Siglin, 80, were taken to Brewster County Jail, charged with criminal trespass, and released. (The two were offered the chance to walk away from the gates with no charges, but refused.) Bat­tista, 30, chose not to be arrested.

Residents in Alpine have been resisting the pipeline for more than a year, but with trenching and welding finally reaching their front doors, their tactics have ramped up. "We just don't want the oil and gas industry invading this area and changing the beauty of this place," Lori Glover said before a November anti-pipeline march outside Marfa. "This is the last place in Texas that is untouched by oil and gas. And this project opens the door. We already see that."

The Glovers helped found the organization Defend Big Bend – though operate as the Big Bend Defense Coalition today – to help galvanize resistance to the Trans-Pecos Pipeline being built by Dallas-based Energy Transfer Partners. It's a planned 148-mile natural-gas pipeline intended to link the fracklands of West Texas' Permian Basin to the deregulating Mexican economy to the south. Of course, to reach Mexico, it has to cross beneath the Rio Grande first. That is where – in an echo of the Standing Rock Sioux's to-date-successful fight to block an ETP crude oil pipeline from crossing Lake Oahe, their primary drinking-water source – things could get difficult.

This week's lockdown represents the first arrests in this escalating conflict targeting Energy Transfer Partners (soon to do business as Sunoco) and its CEO, Kelcy Warren. In late September, about 200 area residents from around the state, including a variety of tribal representatives concerned with the preservation of sacred sites and protection of precious ground and surface water in the region, marched from downtown Alpine to the Pumpco pipe yard and nearby construction site. Attendees peacefully dispersed after an hour of agitated fence rattling. The march was billed as Big Bend standing with Standing Rock. One month later, in November, more than 100 gathered outside a Texas Parks & Wildlife Commission meeting to demand the resignation of "pipeline cowboy" and Abbott-appointee Warren from the board, with several speakers being ejected from the meeting (see "Kelcy Warren Takes a Meeting," Nov. 11). A second Big Bend march, this time gathering in late November at the Marfa Mystery Lights Viewing Center and ending at a pipeline construction site about 10 miles east of Marfa, concluded with roughly 20 people illegally entering the pipeline easement to conduct an indigenous ceremony and prayer beside the pipeline trench.

“We’re hoping to let Kelcy Warren know that if he continues this, we’re going to end up just like Standing Rock. We’re going to stand here the same. We’ll bring people here. We’ll have a camp if we have to.” –Jakki Hagans, Society of Native Nations

The Big Bend resistance is directly inspired by the experience of Standing Rock, where the Lakota and Dakota peoples of the Standing Rock Native American Reservation – since joined by more than 300 indigenous tribes and nations from around the world and thousands of non-native allies during their months-long encampment in North Dakota – have (for now) stopped Warren's $3.7-billion Dakota Access Pipeline in its tracks. After four months of lawsuits, consultations, and numerous direct action protests, the resistance finally wrested a permit denial over the weekend from U.S. Army Corps of Engineers, ordering ETP not to drill beneath Lake Oahe and the Missouri River.

Protest tactics in North Dakota have often involved the unauthorized entry and occupation of pipeline construction sites, almost always with prayers and chants of "Water Is Life," though minor cases of property damage have been reported. In response, the Morton County Sheriff's Department with support from regional law enforcement and an assortment of private security interests like TigerSwan, have countered the non-violent protests with an overwhelming and often indiscriminate display of force that has drawn rebuke from United Nations investigators.

Last week, a request for a temporary restraining order against police forces filed in a North Dakota federal district court decried the use of "an arsenal of dangerous implements and devices," including water cannons in subfreezing temperatures, rubber bullets, chemical agents, and "flashbang-like" grenades. The latter is believed by family members and eyewitnesses to have been what exploded on a 21-year-old woman delivering water to those engaged on the front line, nearly separating her arm from her body. Another woman, shot in the eye with a tear gas canister, according to the complaint, suffered a detached retina and is facing possible permanent blindness.

In spite of the dramatic level of violence directed against them, and the freezing temperatures that have gripped the camp in recent weeks, the Standing Rock resistance has been tenacious.

It is this level of resistance that Warren should expect over the Trans-Pecos and related projects within the state, warned Houston's Jakki Hagans, a member of the newly formed Society of Native Nations. "We're hoping to let Kelcy Warren know that if he continues this, we're going to end up just like Standing Rock," she said. "We're going to stand here the same. We'll bring people here. We'll have a camp if we have to. It's going to be the same as at Standing Rock."

Whatever happens at Standing Rock with Lake Oahe on the Missouri River, Glover expects that same spirit of resistance to continue its burn in Texas. "It seems to just be growing and growing and I think that the more we stand the more capacity will grow." She personally was so offended by ETP's response to the Army Corps' denial – in which the company said they have no intention of rerouting the pipeline, referring to the Standing Rock Sioux and their allies as a "narrow and extreme political constituency" – that she has pledged to do "anything I can do to make him as uncomfortable as possible."

This story has been updated to more accurately reflect the relationship between Defend Big Bend and the Big Bend Defense Coalition.

A version of this article appeared in print on December 9, 2016 with the headline: Big Bend Lockdown 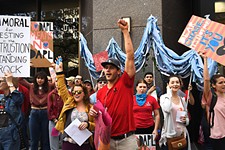 Divest in Chase Bank
The city holds a $1.16 million contract with the bank