The district’s property portfolio has become an increasingly pressing matter

Saying the words "AISD may close some schools" is like shouting "Fire!" in a crowded cinema. The last time trustees even contemplated shuttering campuses it led to years of voter backlash. With the district in the early stages of constructing a new facility master plan (FMP) – one that sets out the campus usage strategy for the next two decades – trustees are contemplating how to emphasize the positives, and make those bitter pills a little easier to swallow. Board President Kendall Pace said, "We don't want to close schools. We want to invest in communities."

Saying the words “AISD may close some schools” is like shouting “Fire!” in a crowded cinema.

The first indications of what could be the future shape of AISD were laid out on Nov. 30 to the district's Facilities and Bond Plan­­ning Advis­ory Committee (FABPAC) by consultants from Brailsford & Dun­lavey. The authors describe the plan as a 30,000-foot view: The district has 130 campuses, averaging 40 years of age – many of which either don't fit the standards of modern teaching or have dire structural issues.

The FABPAC is putting the pieces together for a new facility master plan, laying out facility usage and investment for the next two decades. Within its recommendations are a series of upgrades, new construction, and campus closures and consolidations (as laid out in the map at right).

The district's property portfolio has become an increasingly pressing matter. Recently, the AISD's Board of Trustees issued requests for proposals to sell, lease, or find new uses for a series of underutilized properties owned by the district. Now it has the FABPAC's draft data set and the consultants' draft recommendations – though Board Vice Pres­ident Paul Saldaña was quick to emphasize the word "draft," telling the Chronicle, "It's important to make the distinction that these are options." That said, Saldaña is already getting feedback from community members about some proposals for campuses within his district, such as moving the Liberal Arts and Science Academy from the LBJ High School campus. "That's when I reiterated that it's just an option, and we have a lot of work to do," he said.

“We don’t want to close schools. We want to invest in communities.” – Kendall Pace

Before the FMP is finalized, the data will be used for a construction bond election, currently scheduled for Nov. 2017. AISD hasn't asked voters to approve a bond issue since May 2013, when voters rejected $402 million in projects, including $92 million for new elementaries and $48 million in campus expansions.

Since then, the district has been wary of asking for more money, but it may be experiencing a force of hand. AISD has almost $2 billion in deferred maintenance – a problem accentuated by the emergency closure of T.A. Brown Elementary in November because its floors were in immediate danger of collapsing. Saldaña said the district has the financial capacity to issue enough bonds to cover repairs without raising the property tax rate, though there's doubt about how many projects the district can handle in one go. Moreover, if the district defers again, they could actually cut property tax rates.

A second issue has to do with overall enrollment. Not only is it decreasing within the district, but kids aren't where they used to be. There's a long historic trend at play, with fewer families with school-age children living in Central and East Austin but more demand in areas such as Southwest and around Rundberg. While AISD needs new schools in those busy areas, it's spending a fortune keeping older and half-empty campuses open.

Paul Saldaña thinks trustees should have contemplated other fixes like redrawing attendance boundaries before closures were even mooted.

The mere mention of closures stirs memories of the last major facility master plan. In 2011, another draft FMP proposed closing nine campuses. The political fallout was arguably the beginning of the end for former AISD Superintendent Meria Car­star­phen, and kick-started the political careers of trustees Saldaña, Gina Hinojosa, and Jayme Mathias, as well as current Mayor Pro Tem Kathie Tovo, who served on that year's Facility Master Plan Task Force and rejected the closure list in a minority report.

The big takeaway from that fight was, no matter how under-enrolled or troubled they are, families love their neighborhood schools and will fight to keep them. Pace stressed that when the consultation process begins it has to be transparent. "That doesn't mean we're going to get agreement. We know we're going to get pushback," she said. But: "We can't keep kicking the can down the road."

Saldaña concurred, adding that he would have liked the board to have started discussions earlier, and that trustees should have contemplated other fixes like redrawing attendance boundaries before closures were even mooted. Like Pace, Saldaña also expects a backlash against the board when public input begins. "As painful as it might be for us to hear, and to have people yell and scream and be upset, that's what we signed up for," he said.

March 2017: Draft FMP will be presented to trustees

May 2017: Public discussion of bond package

June 2017: Trustees will vote on whether to proceed with bond

On the Chopping Block?

The following schools were listed for possible closure in a report to the district's Facilities and Bond Planning Advisory Committee. 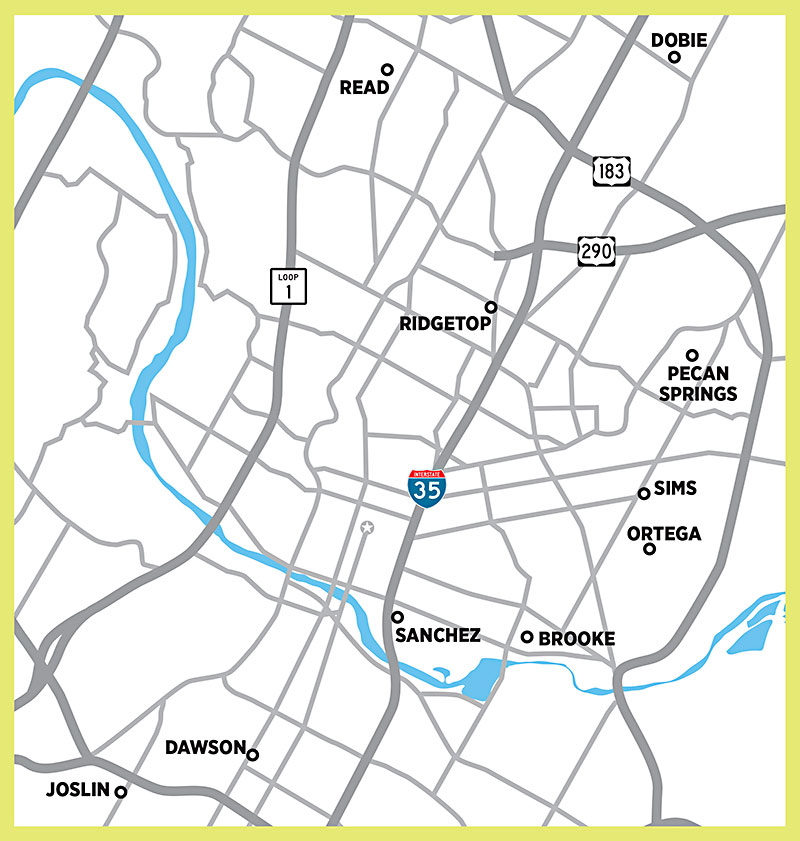 AISD campuses under scrutiny: Consultancy firm Brailsford & Dunlavey recently presented structural and usage analysis and recommendations to the district's Facilities and Bond Planning Advisory Committee (FABPAC), including a list of 10 campuses that are either under-enrolled or in such poor condition that closing them may be the best path. However, these are only options, and would still need to be analyzed and approved by both the FABPAC and trustees.

A version of this article appeared in print on December 9, 2016 with the headline: School Shutdown?