What’s the Future of Body Cameras in Austin?

That’s up to the courts for now 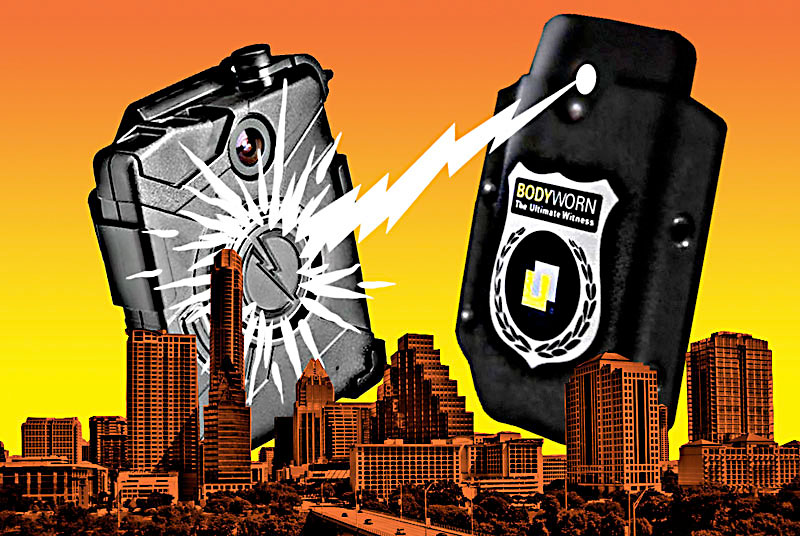 A trial that may break the city's stalemate over the initial purchase of 500 new body cameras for Austin Police Department officers remains slated to begin Nov. 28. Sources familiar with the case say it will almost certainly be postponed because of appeals currently pending in the 3rd U.S. Court of Appeals, with the holdup potentially lasting until early 2017. Equipping the first group of officers with devices will be delayed even longer. A spokesperson at APD reports the department has to date provided only 26 cameras to its patrol officers, though an indeterminate number of cops have bought cameras on their own.

The trial would give Georgia-based Utility Associates Inc. the opportunity to present its case in a district court as to why it – and not Taser Inter­na­tion­al – should have won the bid to provide APD with body cameras. Both sides had until Nov. 21 to file briefs. The appeals panel has until Nov. 30 to choose next steps – an obvious impediment to a target trial date of Nov. 28 – such as whether to hear oral arguments, as Utility and co-plaintiff Bruce Evans have requested. (Evans is a local resident who joined Utility's suit in July.)

“We earned it,” said Ted Davis, CEO of Utility Associates Inc. “We provided the best response at the lowest cost that met all the requirements.”

Nearly a year after city officials issued a request for proposals for body-worn devices, the purchasing effort remains in legal limbo, largely due to the unrelenting efforts of Utility president Ted Davis to wrest the contract away from Taser. Davis has made clear he feels his company has been cheated by the city's procurement process. While critics see Utility as a poor loser trying to force a win at the city's expense, Davis says he's fighting on principle. "What we want is the contract to be awarded to us," he told the Chronicle. "We earned it. We provided the best response at the lowest cost that met all the requirements."

The legal battle began after the city denied protests Utility filed this summer. Council voted to approve the contract award to Taser June 23, amid testimony from Davis and others who expressed concerns about the choice, as well as concerns about the city's simultaneous purchase of iPhones to accompany the cameras – which appeared to some as a backdoor add-on to Taser's contract. APD Com­mand­er Ely Reyes told Council in June that the Taser contract included iPods, and that APD discovered during the post-selection testing of Taser's camera that iPhones were preferable. He maintained they were not an essential part of the body camera procurement. "If the cell phones are not approved, the Taser body camera is still the better product. And we would just include everything that's in the proposal as submitted by Taser," Reyes said. The issue raised concerns, in part because the iPhones, if considered part of the total package, added $5 million to Taser's bid, which was roughly $3 million higher than Utility's.

The city signed a contract with Taser on July 12, just four days after Utility petitioned the district court to stop the city from moving forward. That move, if an attempt to circumvent Utility, may have backfired: On Aug. 5, Judge Orlinda Naranjo ordered that the city be prohibited "from performing any of their obligations arising under or in furtherance of the contract," and from closing the RFP process "pending a trial on the merits of plaintiffs' claims." Since, the city has been left holding a signed contract with Taser that it can't act on, and a procurement process it can't officially close.

The city has denied that Utility's claims are valid without addressing the substance of most of the company's complaints. It has focused instead on getting Utility dismissed as a plaintiff without proper standing and worked to reverse the court's decision to bar the city from moving forward with its intended purchase. Utility sought to build a case on a paper trail of potential purchasing irregularities and its own claims of technical superiority paired with lower costs. Davis said his initial challenge was fueled by his personal knowledge of what the Taser product could do compared with the RFP's requirements. Later, he obtained documents he says provide proof of violations of the city's procurement rules. If or when the case goes to court, a judge will decide whether Davis' accusations hold water.

The city announced March 8 that Taser was the apparent successful bidder – the company's bid to provide body cameras had been evaluated as the best choice on paper and met the basic requirements. However, emails between city procurement staff and Taser executive Andrew Grayson from late March show that some confusion lingered about what was included in the bid, and exactly what the functionality of the package offered by Taser would be. Email exchanges from May also make clear that city staff did not know whether iPods were included as part of the original bid, even though staff indicated that based on the pilot testing completed in mid-April, iPods or other devices with "smart-viewing" capacity would be needed to make cameras perform as desired. In at least one communication, dated May 31, a staff member from Purchasing clarified that no such devices were included in the original bid, in answer to a question posed by the city's Financial Services Department.

"All we are asking for is fairness and that things be scored appropriately for all respondents," Davis said. "If we don't win because of systems that are rigged, then I am doing [my employees] an injustice by not fighting it." But he also said he believes that what he's arguing for is best for Austin. If given the chance, "we would provide the city and the taxpayers with the best body-worn camera system on the planet," he said.

Explanations from the city have not been forthcoming. City Media Relations Manager David Green wrote that due to the ongoing litigation, "staff is not in a position to provide a detailed discussion of technical, complex, and nuanced issues" raised by the Chronicle's questions. And he reiterated the city's belief "that this procurement process was robust and handled in accordance with all applicable purchasing regulations." City Council Members Don Zimmerman, Greg Casar, Leslie Pool, and Ora Houston, who serve on Council's Public Safety Committee, had failed to comment by deadline.

With no end in sight, Austinites may be left hoping for a swift out-of-court resolution, even if it means less transparency with regard to the procurement process and its results. In the meantime, Austin police and the community they serve will have to depend on existing technology (dash cams, spectator cell phones, and the occasional officer-owned body camera) – along with the human eye – to bear witness the next time a controversial encounter flares.

A version of this article appeared in print on November 25, 2016 with the headline: Out of Focus 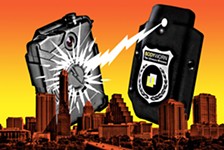 Did the City Jump Into Bed With Taser Too Fast?
Lawsuit seeks to block body camera contract