The Combined Law Enforcement Assoc­i­ations of Texas, the umbrella body of police unions across the state, issued a subpoena to Mayor Steve Adler Monday that calls for the mayor to testify in the upcoming arbitration hearing for Geoffrey Freeman, the Austin police officer fired in March for the fatal shooting of David Joseph. According to CLEAT Exec­utive Director Charley Wilkison, Freeman's counsel wants to grill the mayor for his public citing of "their individual cases" – Freeman's and Bryan Richter's – during last week's press conference announcing a new task force to combat institutional racism. (Richter, under investigation for the June 2015 arrest of Breaion King, hasn't gotten docked with any discipline yet, but likely will; it appears CLEAT's getting out front of that.) "The Travis County grand jury cleared both of them of criminal wrongdoing, but the mayor cannot wait for the process to finish," Wilkison told the Chronicle. "He has inserted himself into undoing their due process rights. He's clearly seeking to influence the outcome of the arbitration."

Mayor Adler denied any such interference Monday evening, reminding the paper that he's "not involved in such personnel decisions" and has not publicly "taken any position on anyone's legal or civil culpability." He added that the inspiration for the task force wasn't Freeman and Richter's police actions but rather "a larger conversation that our entire country is having," one he began in his official capacity last summer. "There is a difference between discussing institutional racism and whether any one person is racist," said Adler. "We'll be a better Austin when we understand that difference." 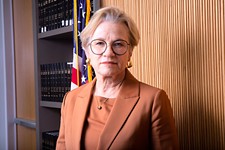