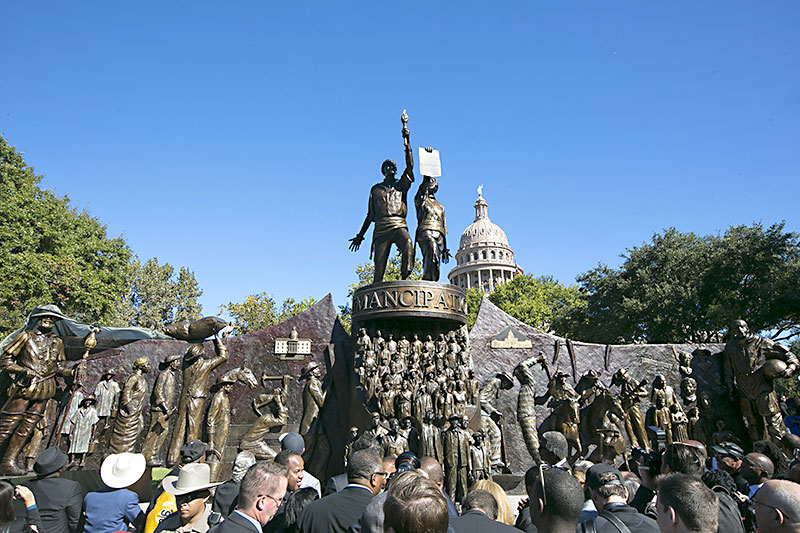 The Texas African American History Memorial, shortly after its unveiling on the Capitol grounds on Saturday, Nov. 19. A small group of white nationalists gathered in the background of the ceremony to protest the memorial, inciting a vocal back-and-forth with counter-protesters in support of equal rights. (Photo by Jana Birchum)

City Council met Tuesday to officially canvass the results of the municipal election and set the District 10 run-off for Dec. 13. The next regular meeting is Dec. 1, when (among other things) they will confirm Asst. Chief Brian Manley as interim Austin Police Department Chief, in the wake of Chief Art Acevedo's acceptance of the position of chief of the Houston Police Department. See "Council: Here Comes CodeNEXT ... Eventually."

Charlie Strong is ... maybe not fired after all. Reports Sunday had it that the University of Texas had canned its beleaguered football coach after a dismal loss to Kansas – UT's first in Oz since 1938 – but the school then issued a wishy-washy statement saying it would evaluate Strong's future after Friday's season-closer against TCU. A press conference on Monday reiterated that the coach still has resounding support from his coaches and players.

Austin Public Library Director Brenda Branch announced that she will retire in December after 40 years of service. Branch presided over the city's library system for the past 25 years.

Since the election, hate incidents have risen dramatically. More than 700 have been reported as of Wed. Nov. 16, including nearly 50 in Texas, according to the Southern Poverty Law Center. The majority of incidents were directed at immigrants and the black community. Most took place at K-12 schools, with businesses and colleges not far behind. SPLC notes it made efforts to verify each report but that many remain anecdotal.

Former Texas Gov. Rick Perry met with President-elect Donald Trump on Monday in New York City. Under consideration for Defense or Energy Department secretary, Perry is on a Trump short list of cabinet hopefuls that also includes U.S. Sen. Ted Cruz. (Lord help us all.) While he criticized Trump during his own presidential run, Perry has recently cozied up to him since the prospect of a high-profile Washington job became a reality.

Grove Matters: mediation between the Bull Creek Road Coalition and developer ARG Bull Creek Ltd. continued over the weekend. A decision was expected to be announced sometime Sat., Nov. 19, but the parties actually worked until Tuesday afternoon trying to come to an agreement. The final deadline isn't until the specially called City Council meeting on Dec. 6.