Acevedo Out, Manley In, Search for Permanent Chief is On 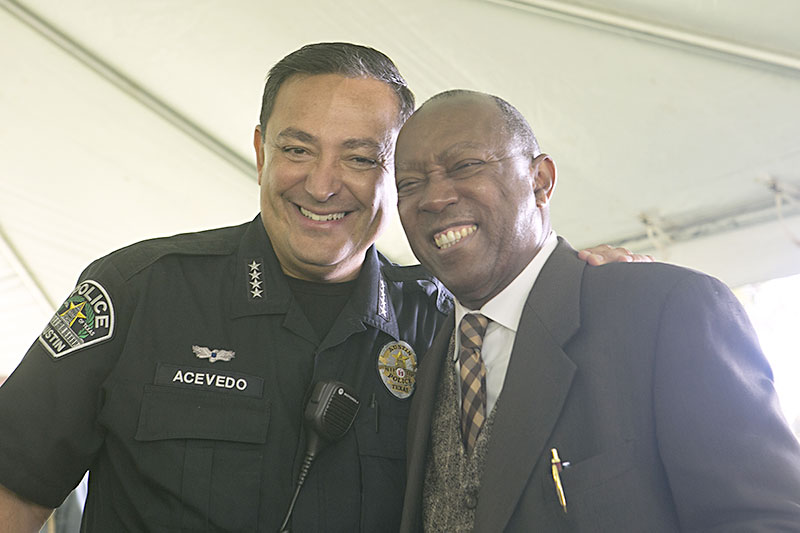 By Tuesday, Nov. 29, Police Chief Art Acevedo will be out at APD. He's expected in Houston's City Hall to swear in as the Bayou City's top cop the next day. Austin's City Council will swear in current APD Chief of Staff Brian Manley as interim chief Dec. 1, thereby completing a three-day transfer of power that's expected to hold for the next 12 to 18 months.

The changes will bring an end to Acevedo's nine-and-a-half year tenure at APD's helm – a long time for such a position in major cities, something he noted somewhat regularly during his last 10 months in service. Know­ledge­able sources within APD didn't know Acevedo was actually leaving until last Wed­nes­day, the day before news broke to the public, but in many ways his departure was a long time coming. The chief has faced an endless barrage of muscle from his union, the Austin Police Association, since February, when the APA opposed his management of the David Joseph shooting. Grievances followed. In April, departed City Manager Marc Ott docked Acevedo five days' pay for insubordination and "undermin[ing] the state approved Police Academy training," another fallout from the Joseph shooting. The union was further angered this summer and early fall after news of Bryan Richter's violent arrest of Breaion King went public and the chief went down to the state Legislature to lobby for a longer statute of limitations on the amount of time a department can take to discipline officers.

Many city staffers who keep close watch on the chief agree that Acevedo could have stuck around Austin forever had he liked.

No single thing pushed Acevedo out, however. In fact, many city staffers who keep close watch on the chief agree that Acevedo could have stuck around Austin forever had he liked. Chief Acevedo was tremendously popular within the community, and within parts of City Hall. As Mayor Steve Adler wrote in a statement shortly after Acevedo's imminent departure was announced: "[R]eplacing him will be a daunting task."

Manley takes over for now. He was the obvious internal choice as the department's chief of staff – an Austin cop since 1990, the second in command who interacted often with Council and city commissioners. A process to find a more permanent replacement should get underway whenever the city hires a city manager to permanently replace Ott. (Elaine Hart, previously the city's chief financial officer, has been running the city on an interim basis since September.) That could take a full year, however, meaning that Manley could hold the position for a while. Expectations are that the search will include candidates both internal and external.