Lege Limits Use of Cannabis Oil for Epileptics 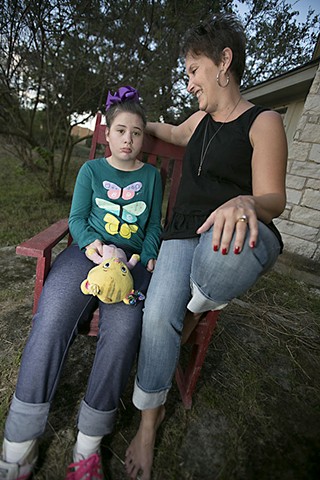 Terri Carriker and her daughter Catherine, who suffers from epilepsy (photo by Jana Birchum)

For Terri Carriker, the moment Gov. Greg Abbott signed the Compassionate Use Act (Senate Bill 339) last summer was one of pure joy. Her 14-year-old daughter Catherine, who has suffered from epilepsy for more than a decade, would be able to legally use a low-THC cannabis oil called CBD (Cannabidiol) to reduce the number and intensity of her seizures. That feeling morphed into one of despair three weeks ago, when the Texas Department of Public Safety released its preliminary rules for the program, which advocates are calling restrictive and unreasonable.

"The thought of having access to a safe, consistent product here legally, in state, it makes me want to cry to think about it even now – it's pretty overwhelming," Carriker said. "I found it pretty shocking and a little devastating to think that's going to be pulled out from under us. It's unconscionable, really."

The rules, first introduced at an Oct. 13 meeting of the state's Public Safety Com­mis­sion, have been published in the Texas Register for public comment, which ends on Nov. 28. The commission will either adopt the rules or request revisions from there. Heather Fazio, the Marijuana Policy Project's Texas political director, said the provisions, which specifically limit the number of licensed dispensaries to the state statutory minimum of three (the maximum is 12) and the dispensary license fee of $6,000 (plus a biennial renewal that will also cost $6,000), will further restrict an already restrictive program that only caters to those with epilepsy.

"With so few patients as consumers of this medicine, the extra cost that the state is putting onto the businesses that will be providing the medicine is going to necessarily pass along to these few very ill patients," Fazio told the Chronicle. "And it really is a disservice to those that the Legislature wanted to help by having this compassionate approach to legislation."

Fazio said the MPP's immediate goal is to get DPS to alter these rules, though the group will advocate for less stringent regulations in the next legislative session. But for Carriker and other families struggling with epilepsy, the idea of going back to the Cap­it­ol to fight this fight again is daunting. Last session, she spent countless hours away from Catherine pleading with different legislators.

"My daughter this morning has only been up for half an hour, having seizures on and off while she's sleeping," she said. "It's difficult for families like ours to kind of mount the troops and make a push, because we're all kind of strapped just managing our kids as it is. It's really frustrating to have to go back and do what we feel we've already done. And the vote was so overwhelmingly for the bill, I don't understand how this happened."

DPS posted a note on its website explaining that licensing fees are as high as they are in part due to the DPS presence dispensaries will be required to have seven days a week. That presence, based on "security and safety concerns" of executive leadership, will cost $1.2 million over the biennium.

"It's phenomenally ridiculous," Carriker said of that particular rule. Though batches vary at this point because the market is unregulated, suppliers either extract most of the THC from the compound or use cannabis that has been bred to contain low amounts of THC. "You would have to drink a swimming -pool-size amount of this liquid to have the slightest buzz from it. It has almost no THC in it. There's no street value for this because no one's going to get high off of it."

Carriker continued: "I don't think I sat and talked to anyone who was even staunchly opposed to [SB 339], when they understood the truth and got factual information about it and saw how it could affect kids like my daughter, who had any resistance to it. ... I want to know who's responsible so that we can go to work sharing education information."

A version of this article appeared in print on November 18, 2016 with the headline: Compassionate Misuse