Marathon days of zoning are soon over 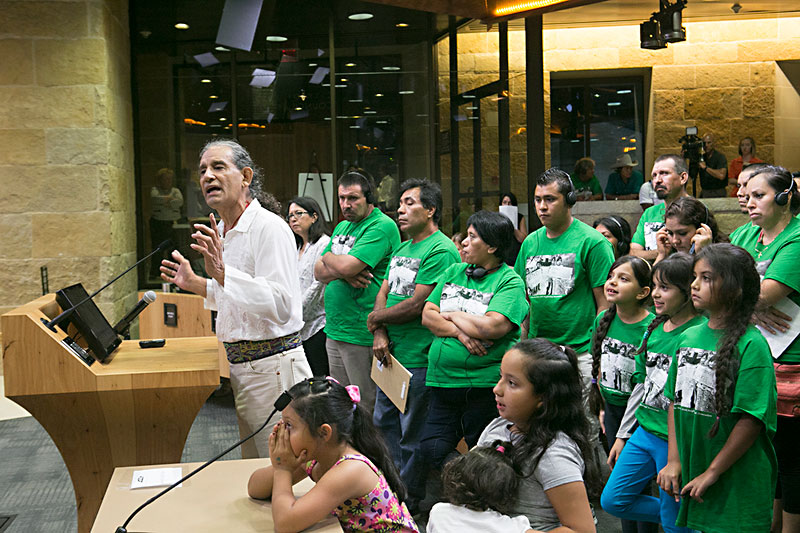 Residents and supporters of the Cactus Rose mobile home neighborhood speak at City Council in September. (photo by John Anderson)

Last week's City Council meeting (Nov. 10) is apparently the end of the 10-1 Coun­cil's "all-zoning meeting" experiment. Thurs­day's actions included approval of the 2017 meeting calendar, and (almost in passing) Council Member Ann Kitchen reminded everyone of the dais inclination to once again mingle zoning cases with all the other Council business, instead of cramming them into one meeting a month. "We're spreading them out over every meeting now," came the staff response, closing out one small remnant of the 10-1 "administrative reform" era.

It's just as well; the attempt to segregate zoning cases from other Council business was about as successful as stopping the eastward march of gentrification – indeed, one was kin to the other. Major contracts and other business were always leaking into the top of the agenda, along with the propensity of some members (e.g., CM Don Zimmerman) to pull contracts at random in order to grill department heads patiently cooling their heels in the back of chambers. Come January, that particular ritual will end; Zimmerman, denied re-election Nov. 8 by CM-elect Jimmy Flanni­gan, acknowledged "obviously I won't be here" as introduction to yet another plea to his colleagues to "defend property rights." His colleagues bit their tongues, although the return of CM Ellen Troxclair from family leave did evoke a round of applause from council members and the public.

“We’re spreading [Zoning items] out over every meeting now,” staff told Council, closing out one small remnant of the 10-1 “administrative reform” era.

One ritual that recurred was the March of Many Postponements: No fewer than 26 of 71 agenda items (37%) were kicked to the curb, including half of the 40 zoning cases, via requests from the applicants, the neighborhoods, or staff. The highest-profile postponements were the two headline planned unit developments: the Austin Oaks PUD and the Grove at Shoal Creek PUD. The first was moved without fuss to the regular Dec. 15 meeting; but the already oft-delayed Grove debate was moved to a special-called meeting on Dec. 6, over the objections of Mayor Pro Tem Kathie Tovo and the PUD's prime antagonist, CM Leslie Pool. The delay will allow another mediation day, requested by the Bull Creek Road Coalition (representing nearby neighbors) and scheduled for Nov. 19, but Tovo and Pool argued that it was "unprecedented" to schedule an extra meeting at the behest of the developer (ARG Bull Creek Ltd.), which has objected to additional and expensive project delays.

Also on the PUD beat was the return of Pilot Knob – the massive far southeast development (aka Easton Park), approved earlier but returning somewhat chastened from a court rejection of the posting language. Staff and Council elaborated that agenda posting, and – at the proposal of Mayor Adler and co-sponsors Garza and Greg Casar – deferred the precise funding of the affordable housing component for another day. As conceived, the development will feature 10% rental units affordable at 60% median family income, and 10% affordable owned homes at 80% MFI (both to be maintained for 40 years) – but staff is charged with bringing back underwriting options including but beyond the initially enacted developer "fee waivers" (actually fee transfers from Austin Water hookup charges to the affordable housing fund) of the original deal. Sensationalized States­man headlines concerning the long-term cost of the "waivers" along with the lawsuit had spooked some of the dais, and it's not certain staff can come up with funding formulas that would persuade all sides. But the revised version passed with only minor misgivings, and the new year will bring a renewed debate over the money. Among other actions:

• Plucking the Thorns: Council blessed a remarkable compromise over the Cactus Rose mobile home redevelopment (soon to be "Lenox Oaks"). After 18 months of negotiations among the residents, developer Oden Hughes, and nearby neighborhood associations, facilitated by CM Pio Renteria and Susana Almanza of PODER, the agreement includes substantial cash settlements (sufficient to purchase new mobile homes) and relocation assistance for the current residents, specifically to enable most residents to remain in the area. Residents expressed their thanks to the council and all the parties, and (after some pokes at connectivity issues) Council passed the case on second reading (pending an actual site plan).

• Who's Our Champion?: Not so happy were neighbors near the Champion Tract, up for third reading of a zoning change that would allow a proposed apartment complex on the hilly site at FM 2222 and City Park Road, near Loop 360. After city staff presented the pending agreement over the project – which included a shrunken footprint, several environmental protections, and a last-minute offer of 10% affordable units – Council gave final approval, 7-4, despite strong objections from nearby neighborhood associations (and their attorneys) strong enough to move CM Sheri Gallo (whose District 10 includes the site) to vote no. A supermajority requirement was foiled by moving the site slightly beyond a 200-foot distance necessary for a valid objecting petition. Expect more reverberations: Seven nearby neighborhood associations vow to continue the fight.

Can't get enough City Council? By the time you read this, a special-called meeting will have occurred Wednesday afternoon, among the council and the Land Devel­opment Code Advisory Group – an update on CodeNEXT. For more Council coverage, follow the Daily News.