A Secure Platform for the Rights of Airport Workers

Three weeks ago, 70 concessions workers at Austin-Berg­strom International Airport held a press conference, organized by the Unite Here Local 23 union, to demand fair wages and quality jobs. The event followed the opening of the public bidding process for concessions operations at the airport, in advance of the airport's pending expansion. 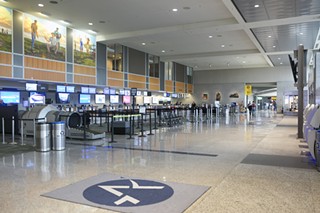 The platform presented by the union and workers focused on four principles: economic stability, affordable quality health­ care, job security, and training. In Oct. 2015, City Coun­cil authorized the Aviation Department to begin the process of making improvements to the airport and expanding the terminal and apron (where planes park), contracting design firm Gensler as the architect and Hensel Phelps as the builder. The current top bidders for the expansion of concessions include Delaware North, which operates several restaurants and retail venues at ABIA already, as well as HMSHost and Paradies, both of which operate in dozens of airports around the country.

When City Council approved Delaware North's contract in Nov. 2014, it included a provision that concession workers would be paid a living wage, in line with the city's recent living wage resolution, by no later than the end of 2017. Delaware North's initial proposal put the pay scale between $9.15 and $11.15, depending on the worker's job category. (See "Wages up in the Air," Nov 21, 2014.) Willy Gonzalez, Texas chapter president of Unite Here, told the Chronicle that the company had promised a raise to $13.03 by this coming January. "Delaware North is trying to do the right thing," he said. "But we'll still fight them if we have to."

It's clear why ABIA workers might be concerned: Both Delaware North and HMSHost have been sued in multiple states for wage law violations and other issues. One Mary­land concessions worker, Brenda Smith, filed a workers' compensation claim with Delaware North after she slipped on the job and injured her knee in 2012; after Delaware North attempted to impeach Smith's doctor's credibility with a consent order, that case is still dragging on years later. In Oakland in 2012, workers filed complaints against several sublessee concessionaires of HMSHost for violating overtime laws. In an even more complex case, Paradies was sued by the federal government in 1993: Founder Dan Paradies, who has since died, was charged with bribing and conspiring with a member of the Atlanta City Council for reduced rental rates and favorable votes in council decisions.

Iris Leija, a prep cook at ABIA and a member of the union, said she is scared of losing her health benefits, and even her job. "Health­ care is very expensive, and we all have families," she said. "I'm afraid I won't be able to provide for my kids."

Whichever company wins the bid, Council will decide in January whether or not to approve them as a vendor. Casar believes this will put Council in a position to make sure the applicant will meet the needs of the workers. Gonzalez said the union's next move will depend on the outcome of the bidding process, but that the group is invested in the effort. "The union is ready to stand up and fight to make sure that those workers have good jobs, all of them," he said.

Leija shared Gonzalez's resolve: "We're prepared to do anything we have to do to have benefits and better jobs."