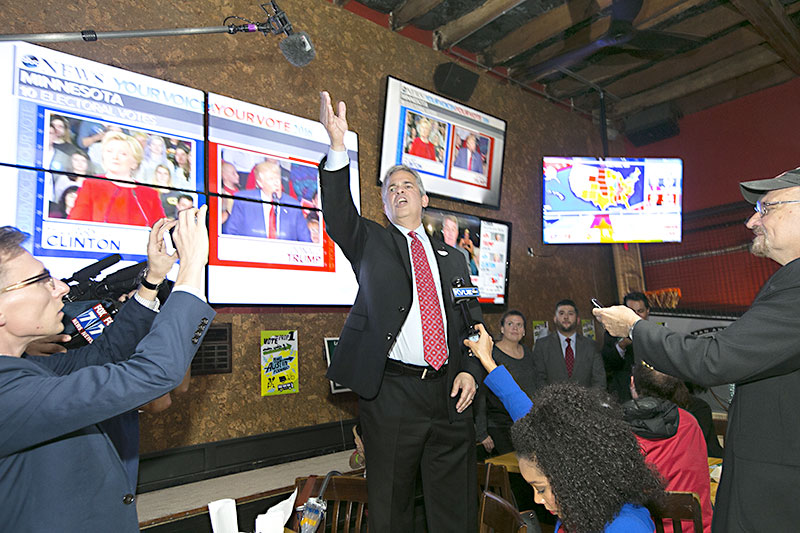 Mayor Steve Adler was quick to declare unofficial victory Tuesday night at an already boisterous Lavaca Street Bar, a few minutes after the release of the early voting returns. He told reporters, "I'm excited, and now the work begins," noting that the early vote lead, just shy of 60% approval by what appeared to be at least two-thirds of likely voters, would be "pretty hard for the remainder of votes to reverse." (Indeed, E-Day turned out to comprise just 25% of the total vote, and scarcely changed the overall result.) He added, "We need everybody involved and watching" the implementation of the bond, and said that while that happens, the city would be simultaneously working with "regional partners" like CAMPO and other agencies to put together an "overall strategic plan" on transportation. "We have $9 billion-plus of needs on transportation that we haven't been addressing."

Move Austin Forward campaign manager Jim Wick, visibly relaxed, said he was "pleased and really excited" at the results, which he said confirmed the campaign's research. He pointed specifically to turnout by students and "along the corridors," as the campaign explained the bond's benefits. "I'm glad the city came together and said, 'We're gonna do something.'"

Spirits were not so high a bit later at the Park on South Lamar, where a small group of bond opponents had gathered to await results. Honest Transportation Solutions PAC spokesman Roger Falk was subdued, but congratulated the mayor for his victory, adding that being outspent "10 or 12 to 1" made it very difficult for opponents to make their case. Falk said that while he hoped the voters "will reap the rewards they voted for," he still believes the bond will be more expensive than advertised and won't do what's been promised. "I try to make my words sweet, in case I have to eat them," he said. "I believe this is a growth machine development bond for those corridors, and will not provide the impact [on traffic congestion] that people have been promised."

With the final margin (59%-41%) still pending, the folks back at Lavaca Street had felt other­wise. Adler policy advisor Brandi Clark Burton described the bond as "not the total package," but a broad-based solution to "the core places that affect the most people," and said the benefits would accrue not just to motor vehicles but people on bikes and on foot, making the corridors "not just places to pass through, but places to be." Parks advocate Ted Siff echoed those thoughts, calling the bond "a good balance among all the modes of transportation," and "a big step in the right direction" on transportation mode-shifting, and "one that the community could support."

In an impromptu victory speech, the mayor stepped onto a chair and shouted over the din, thanking everyone who worked on the rushed campaign, and urging them to "stay involved" through implementation and further planning. He said he expected the most "shovel-ready" projects to be the sidewalk and Safe Routes to Schools projects, and he congratulated the team for helping take a major step to address "mobility and affordability." "Now the work begins," he repeated. "Drink the beer, celebrate, and tomorrow we go to work."