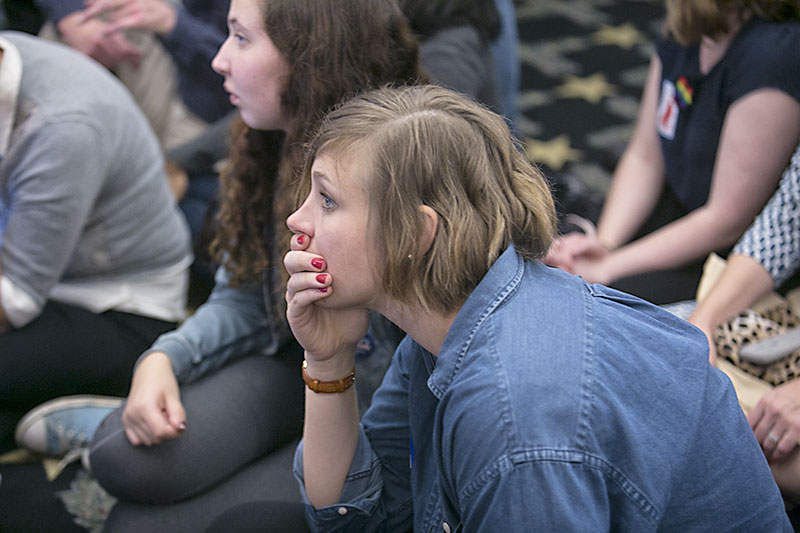 Voters watching the election with the Travis County Dems Tuesday night at the Driskill Hotel cope with the night's results. (Photo by Jana Birchum)

Apocalypse Comes Soon: In the Department of Small Comfort, President-elect Donald Trump "underperformed" in solid red Texas, winning only 52.7% of the vote – the smallest GOP margin since 1996, when Bob Dole won by five points. Hillary Clinton took 43.4% of the vote.

Grove to Curb?: City Council meets today (Nov. 10), perhaps still with an Election Day hangover and no Tuesday work session to prep. Today's headaches include PUDville: Pilot Knob, Austin Oaks, and the Grove (buzz predicts another postponement), plus a continuation of the Champion Tract public hearing. See "Council: No Rest for the Weary."

A Cactus Rose settlement has been reached, affording residents of that mobile home park relocation help, and reportedly agreed on by all parties so the Lenox Oaks development can move ahead, according to a release from CM Pio Renteria's office.

Save the Onion: If you're ready to jump back into post-election activism – Thursday night also features a public hearing on the city of Drip­ping Springs' request to the TCEQ for a treated wastewater permit for discharge into Onion Creek. Add your two cents at Dripping Springs Ranch Park: 7pm, Thu., Nov. 10, at 1042 Event Center Dr. (For more info, see www.protectourwaternow.org.)

Texas Attorney General Ken Paxton and eight other states have asked the U.S. 5th Circuit Court of Appeals to revive an anti-LGBTQ Mississippi law, previously struck down for violating the Constitution's equal protection clause against LGBTQ discrimination. The law was meant to protect bigotry, or so-called "religious beliefs," when it comes to same-sex marriage, transgender rights, and refusing to serve gay people in businesses.

More elections to come: With no clear winner in one City Council race and two ACC seats, plus Rep. Dawnna Dukes stepping down in January, Travis County residents can expect a run-off election Dec. 13, and a special election early next year.

Students at AISD's T.A. Brown Elemen­tary in North Austin are taking classes at other campuses after a structural engineer found the aging school's concrete floors are in danger of collapse.