Emptying out the dregs from this election 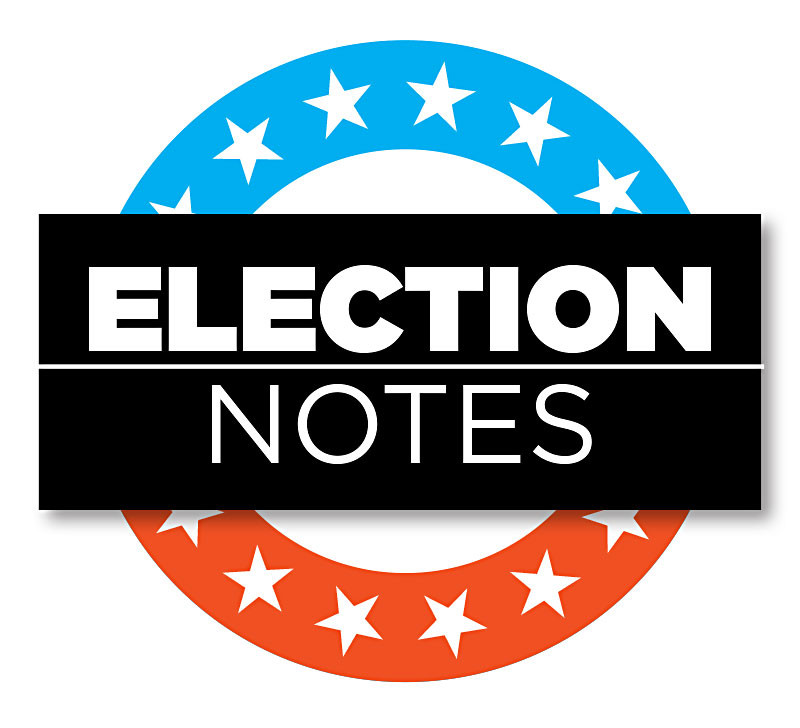 Prop 1 PAC Spending: If Mayor Steve Adler's "Go Big" Mobility Bond had lost, it wouldn't have been for lack of trying – or spending. By its eight-day-out report, filed Oct. 31, the Austin Forward political action committee supporting the bond had spent in excess of $700,000, with $75,000 cash on hand for the final week. Bond opponents funding two PACs – Sensible Transporta­tion Solutions and Honest Transportation Solutions – had together collected about $160,000, and spent roughly two-thirds of that funding (as of filing date Oct. 31). STS, initially funded almost entirely by former Texas Monthly publisher Mike Levy, has since collected about $16,000 from "Macho Marketing" for newspaper advertising. The ad firm, reports its website, is the "in-house marketing agency for the Continental Automotive Group," five auto dealerships in Austin and Corpus Christi, owned by Bryan Hardeman and his family. One of those dealerships is the Airport Boulevard Mercedes-Benz. Hardeman was a member of the city's citizens' advisory group working on the Airport Blvd. redesign ("Preparing for Takeoff," Oct. 21, 2011). Perhaps he didn't care for the final plan .... – Michael King

Hogging the Glory: In a Nov. 4 campaign release, ousted Council Member Don Zim­merman continued to blast his since-victorious challenger Jimmy Flannigan for hoarding all the credit for including Anderson Mill Road in the city's mobility bond. Zim pointed to a Nov. 1 Austin American-Statesman Politifact "Mostly False" rating (contains an "element of truth" but ignores critical facts) on the claim: "The irony of it is that 'consensus-building' Flannigan hogged up all the glory regarding plans to improve Anderson Mill Road," said Zimmerman in a statement. "We're grateful that Jimmy's grandstanding and exaggerations were called out by the Statesman. Sadly, that's only the tip of the iceberg: imagine how he would hoard all the credit as a sitting City Council member! That should be enough to discourage any media publication or organization from endorsing him." The mayor's office indicated that neither Flannigan nor Zimmer­man deserve full credit for getting Anderson Mill included; rather, it was a collaborative effort, as the Chronicle previously reported ("Election Notes," Oct. 28). – Mary Tuma 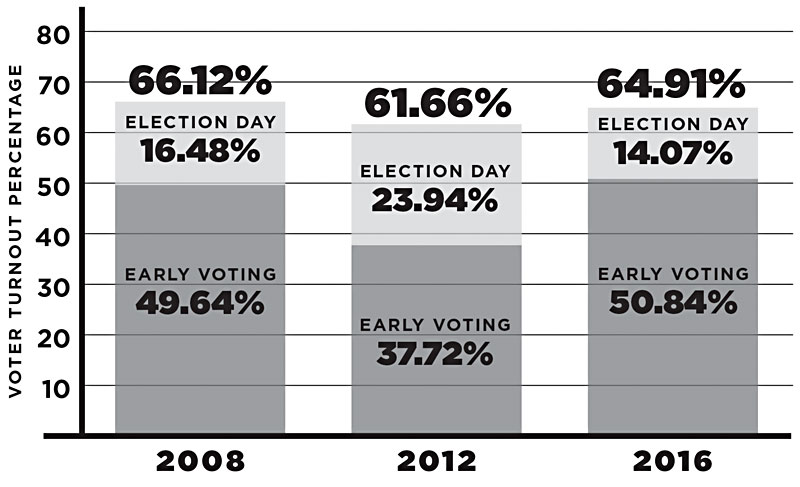 Election night produced seemingly contradictory numbers: Turnout in Travis County reached a new record, but the percentage was actually down from the last time the White House was open. In 2008, a total of 402,832 registered voters cast their ballot, translating to 66.1% of registered voters. This year, total turnout reached 475,141, but that only translated to 64.9% of all registered voters.

Initial signs indicated that this year should have beaten both records, with the county breaking its goal of registering 90% of all eligible voters, then a new record being set with 51% turnout in early voting. However, Election Day voting slipped dramatically. The math is simple: With the area’s population increase, plus the registration drive, there were more people on the rolls, but a smaller proportion turned out than had in the past.

More Love, Less Hate: Although its outcome will hit close to home, the Austin Mobility Bond (aka Proposition 1), down near the bottom of the ballot, was perhaps also low on everybody's mind on Tuesday. Last week we reported on a mistaken Twitter allegation that San Diego tycoon (and Trump supporter) Douglas F. Man­chester had contributed to the Prop 1 campaign – it was in fact the Manchester Texas Financial Group directed by son Douglas W. Manchester. Douglas W. subsequently told the Chronicle: "A recent social media tweet attempted to link my support of the City of Austin's Prop 1 with Donald Trump. While I share aspirations with my father for quality development work, we have many different political views – and it's ludicrous to try to connect dots between my support of Prop 1 to the presidential election. I would personally like Austinites to know I have not [and] will not support Trump. Furthermore, I strongly believe in the inherent rights of all – including women, LGBT, and minorities. The world needs more love and less hate – almost as badly as Austin needs real transportation solutions. Go Prop 1!" – M.K.

Dan Patrick, Prestigious Media Critic: Lt. Gov. Dan Patrick sought to debunk the "mainstream media" claim that Repub­lican women are turning on their own party after displays of misogyny from President-elect Donald Trump and Texas' own conservative Agricultural Commis­sioner Sid Miller. Last week, a since-fired campaign staffer in Miller's office sent a tweet that referred to Dem nominee Hillary Clinton as a "cunt." Patrick, Texas chair­man of the Trump for President campaign, assured voters in a Nov. 4 release that Texas women are still "solidly" behind the GOP ticket. "Texas women were never going to support a pro-abortion, anti-gun, tax and spend liberal who will pack the Supreme Court with people who want to take away our freedom of speech and expand abortion," he said. (Nothing says respect for women in Texas than mansplaining their voting behavior as a monolithic bloc!) Unfortunately for him, a dozen female political consultants, public officials, lobbyists, and future politicians recently told the Texas Tribune that they "no longer feel welcome in the party they have spent decades helping build." – M.T.

Tweet Backlash: Speaking of Miller's tweetstorm, Texas Dem women held a press conference Nov. 2 slamming the derogatory tweet. Austin Council Members Delia Garza, Ann Kitchen, Kathie Tovo, Leslie Pool, former CM Laura Morrison, and Travis County Commissioner Brigid Shea stood in force to express their deep disapproval. "It is not simply locker-room talk. It is an indication about what a group of people in this state and the community think about women – it's not okay and we cannot accept it," said Kitchen. State Reps. Celia Israel and Gina Hinojosa, D-Austin, also came to show solidarity. "Have you fallen so deeply into the cesspool created by Donald Trump that you've forgotten how to be respectful to your fellow men and women?" said Israel. (For the record, Miller eventually apologized for the tweet, but his record of legislating women's bodies, which includes authorship of the state's draconian 24-hour pre-abortion sonogram law, should speak to where he stands on respecting women.)

If Mayor Steve Adler’s “Go Big” Mobility Bond had lost, it wouldn’t have been for lack of trying – or spending.

And there's business backlash, too: An Austin ad design firm that has done work for the Texas Department of Agriculture since 2003 has threatened to stop offering its services unless Miller resigns. In a sharply worded letter, Neely Ashmun and Scott Herron of BAH! Design, Inc. wrote that Miller's public display of disrespect is "proof" of his unfitness to hold office. "As proud Texans, we are personally offended by the dishonor you have done to our state, to our mothers, wives, daughters, and sisters and to the Texas men who hold these women in high regard," they wrote. We're betting Miller isn't packing up his desk anytime soon. – M.T.

Tokin' Opposition? We Smoke to Forget? Red and Blue Make Green? The headlines just write themselves. There was a form of relief for many blue-state voters on Tues­day, as California, Massachusetts, Nevada, and Maine all voted to legalize recreational marijuana. In Arizona, the only red state that had recreational pot on the ballot, the measure failed, 52-48%, though medical marijuana measures passed in four other red states: Florida, North Dakota, Montana, and Arkansas. Overall, that makes 28 states that have legalized medical marijuana, and eight plus the District of Columbia with legal recreational use. California is huge, of course, and though the specifics of the new law there have been controversial – especially among existing independent growers – advocates are stoked that the entire West Coast now has legal recreational use, while Massachusetts and Maine become the first such outposts east of the Rockies. – Nick Barbaro

What doesn't kill the death penalty only makes it stronger. Voters in Nebraska voted 2-to-1 to bring capital punishment back to the Midwest state. The referendum repeals a 2015 decision to abolish executions and replace such sentences with life without parole. Two states south in Okla­homa, voters decided through State Ques­tion 776 that capital punishment is neither cruel nor unusual, ushering in future conflicts for defense and appeals attorneys planning to argue mitigation on the merits of the U.S. Constitution's Eighth Amend­ment. In California, voters cast off Propo­sition 62, which would have replaced executions with life without parole, by a vote of 46% to 54%. Californians also voted in favor (51% to 49%) of Proposition 66, which will change the procedures governing state court appeals and petitions to expedite the process of moving a death row inmate through the appeals process (and toward their execution) faster than they are moved today.