Council: No Rest for the Weary

Zoning debates dominate the meeting that nearly never was 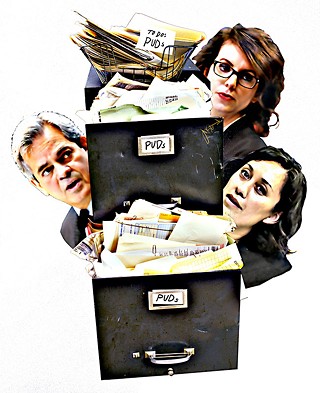 At last Thursday's meeting (Nov. 3), City Council canceled this Tuesday's work session (Nov. 8) for the understandable consideration that it would be Election Day. They were not unanimous – District 2 Council Mem­ber Delia Garza, one of the five incumbents campaigning for re-election, thought it unnecessary, and D1 CM Ora Houston voted no – but the majority argued they should be out on the hustings all day, and the cancellation prevailed. More amusing was the brief discussion of whether also to cancel today's regular meeting (Nov. 10) – that possibility wasn't posted on the agenda, so City Attorney Anne Morgan told them all they could do was to inform one another on the Council message board whether they would attend.

Looks like they'll be here: By the end of the day, members realized that today's "zoning" agenda had enough extra meat on it they would need to wear barbeque bibs. Consider just these four Items: Pilot Knob PUD, Austin Oaks PUD, Champion Tract, and the Grove PUD. If they dig deeply into those four, the remaining 67 Items might all be kicked to the curb.

Without the preliminary work session to signal consensus, there's additional occasion for the unexpected, but:

• Look but Leap: Despite the Statesman's grandstanding on the cost, and a successful lawsuit on the initial posting language, the Pilot Knob PUD (Items 8 & 32) has survived two readings and likely will survive this third (public hearing closed). The detailed backup more clearly explains the nature of the fee shift from water connection rates to affordable housing maintenance funds, with an annual citywide rate impact of about $1/month in return for 20% of the housing at affordable rates.

• Bring Your Reading Glasses: The staff report on the Austin Oaks PUD (Item 62) is 241 pages, so it's fair to say there's quite a bit of detail for Council and staff to review. Staff recommends approval of the current version of the planned unit development, but there remains enough neighborhood opposition that we can expect an earful – and a possible "first reading only" to enable more tergiversation on and off the dais.

• And Another Thing ...: The Champion landowners never take no for an answer, and this proposed shift from a low-rise office zoning to a five-story apartment complex arrives with unanimous votes on two readings. But last week's Council meeting featured blistering testimony from neighbors and their allied attorneys, enough that CM Sheri Gallo (it's in her District 10, on City Park Road at FM 2222) indicated she may be changing her mind, which could influence her colleagues. The public hearing remains open (some folks deferred last week), so Council will likely get another earful.

• Ah, Yes, the Grove: That other PUD – the Grove at Shoal Creek – remains posted (Item 63), but the Bull Creek Road Coalition has requested additional mediation despite resistance from developer ARG Bull Creek Ltd. It's not clear when the breaking point might be, but odds are one more postponement is in the works. ARG wants some assurances that if mediation succeeds, Council won't throw additional monkey wrenches into the works – the "placeholder" vote on first reading was 8-2.

If they survive those Big Four:

• Expect High Water: There are five scheduled 4pm public hearings (along with whatever cases are given "time certains" from the dais, including an expansion of Historic Landmark Commission review, an appeal of the Scoot Inn outdoor music permit (both of those marked for postponement), and an odd request for construction variances at 1000 N. Lamar that acknowledges that the place, when built, will periodically flood. (Staff recommends rejection.)

Also several annexations (the largest being the northeast Entrada tract, at 246 acres), which must be approved or deferred for a year; a continuation of last week's debate of the "historical" status of the 1618 Palma Plaza fourplex, which could bring with it stricter standards on demolition permits; and the likely approval of "permissive" sterilization of loose dogs and cats on first impoundment (current standard is second impoundment). That proposal also generated emotional testimony last week, but looks likely to pass. And there's a dollop of good news for Samsung – which presumably could use it – with the city seconding the state's designation of Samsung Austin Semiconductor for a "Texas Enterprise Project" to promote job retention in high-poverty areas, in return for $1.25 million of the state share of sales taxes. Since there's no official live music at a Council zoning session, perhaps there's a Samsung employee chorus that could do the honors.

By the end of the day, members realized today’s “zoning” agenda had enough extra meat on it they would need to wear BBQ bibs.