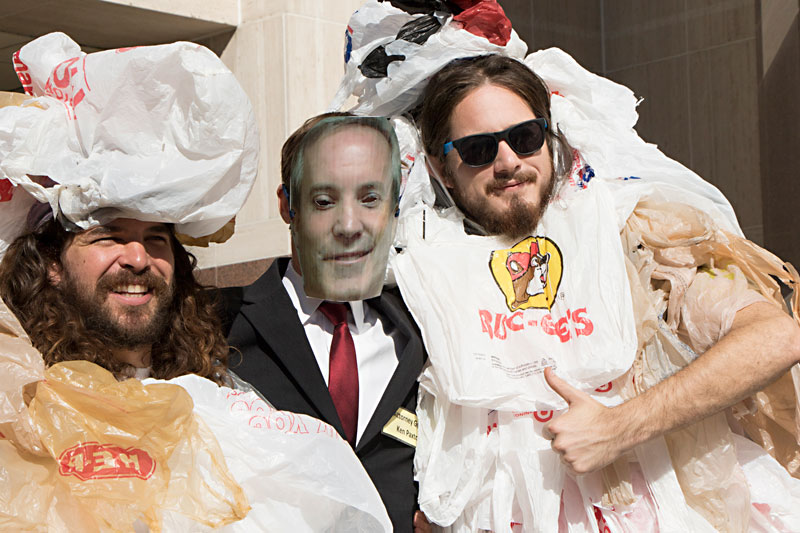 Activists dressed as Ken Paxton and "Bag Monsters" to protest the Texas attorney general's recent legal action against Brownsville's bag law, which places a $1-per transaction fee on all plastic bags issued at grocery stores and other retail outlets, Monday outside Paxton's Downtown office. (Photo by Al Braden)

No Grove PUD? City Council meets today (Nov. 3) over 79 items, but few that look fire-breathing: the Champion Tract returns on third reading, a half-dozen public improvement districts are up for review, and the morning briefing is on the reckless Dripping Springs proposal to discharge treated wastewater into Onion Creek. See "Council: From Trash to Treasure," Nov. 4.

Last Chance: Early voting is setting all kinds of Travis County records, and ends Friday, Nov. 4. Election Day itself – your last chance to hold off the apocalypse – is Tue., Nov. 8. Council has even canceled its scheduled work session! If you're still in doubt about any races, check out our Chronicle endorsements.

Child safety caseworkers need a $12,000 raise, Texas Child Protective Services director Hank Whitman told the Senate Finance Committee in a letter. The agency is under fire from the very Republican lawmakers who crippled its budget in the first place, but Whitman wrote he needs more and better-paid staff to cut case backlogs.

Jennifer Houlihan is out as executive director of Austin Music People. The policy wonk announced last week that she's accepted a position as Director of Business Development at Nomad Sound. Houlihan has also signed on as a consultant with TNC-in-exile Lyft.

Open enrollment for Texas residents to sign up or renew health care under the Affordable Care Act began Tuesday. Be warned: After a handful of insurers including Aetna and United opted out of the federal exchange, some residents could expect higher premiums and fewer options. A record 1.3 million Texans enrolled in the ACA this year. Sign up at www.healthcare.gov.