Election Notes: Notes at the End of the Road

Just a few more days of this deluge 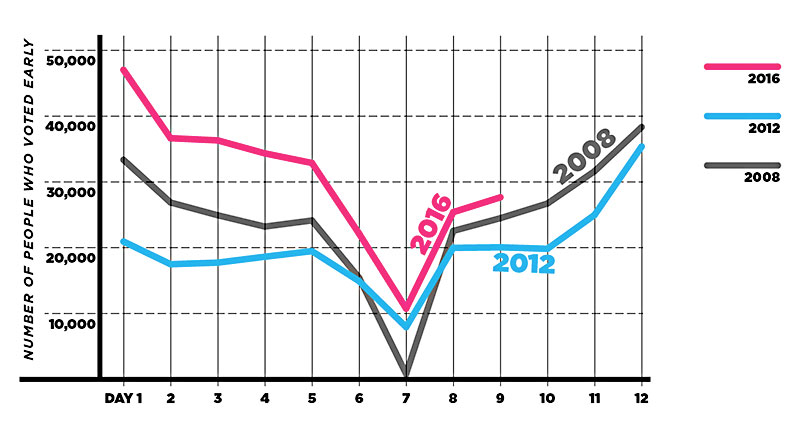 Record numbers of Travis County voters cast their ballots early this election. After nine days of early voting (Wednesday's figures weren't yet in when the paper went to press), turnout stands at 273,061 (37.5% of the population), suggesting numbers will smash record-setting 2008 early voting statistics of 302,426 for all 12 days. So far, every day has set a new record, a pattern being repeated across the state's most urban counties. The question remains whether that means more voters in total, or just more early voters. In 2008, total turnout in Travis County reached 402,832. However, only one in four of those votes came on Election Day. – Richard Whittaker

Do Not Pass Gallo: The Crestview-affiliated Arbor PAC is no fan of District 10 Council Member Sheri Gallo. On Oct. 28, the Austin-based political committee launched www.galloforsale.com, an oppositional website focused on Gallo's connection to the real estate lobby. The Monopoly-themed site details the campaign contributions Gallo has received from developers and trade lobbyists, and calls the D10 incumbent out for allegedly pandering to special interests during her tenure. – Annamarya Scaccia

Double the Money: A Chronicle reader noted a discrepancy in donations made to Gallo's re-election campaign by the HDR, Inc. PAC. A review of campaign finance records confirmed that HDR, Inc. had reported two separate donations in the amount of $350 – the maximum amount per campaign finance rules – while Gallo had only reported one donation. Turns out, the PAC had misspelled Gallo's name on the first $350 check it issued in July, so it was voided and reissued in September, according to a spokesperson for the Omaha-based architectural, design, and engineering company. The Chronicle received a copy of the voided check, and indeed Gallo's name was spelled incorrectly, with two R's and an extra A. – A.S.

Never Natalie: Last week also saw the debut of the website www.nevernatalie.com, opposing D7 City Council candidate Natalie Gauldin. The site, also the work of Arbor PAC, attacks Gauldin for her connections to "front groups for developers" Friends of Austin Neighborhoods and AURA (Austin­ites for Urban Rail Action). In response to the site and accompanying mailers, Gauldin wrote via email: "I cannot help but assume that Leslie Pool's camp has been coordinating with this PAC. According to a mailer that was sent to my home the other day, Fred Lewis is a top contributor. A quick Google search shows how closely he has worked with Pool on the lobbying ordinance over the last year."

Pool adviser Matt Hersh dismissed the idea that the campaign is coordinating with Arbor. The site lists Jett Hanna, senior vice president at the Texas Lawyers' Insurance Exchange, the SWLDC PAC, TASB Risk Man­age­ment Fund consultant Joanie Arrott, and others as major contributors. "To be clear, there is absolutely no coordination between Leslie Pool's campaign and these activities or this PAC. After looking over the website, it seems apparent that there are people in the district who care about protecting our neighborhoods and are frustrated with the fact that Natalie uses buzzwords like 'affordability' and 'transportation' to conceal [that] she is talking about developing as much as possible within family neighborhoods without regards for the existing residents."

Austin Neighborhoods Council member and Crestview resident Mike Lavigne helped write the site, and explained it as part of a larger effort on the part of neighborhood activists to "fight against the [Real Estate Council of Austin] candidates."

"Since the beginning, the popular narrative pushed by Pool has been that I am 'a well-funded candidate' backed by developers," countered Gauldin. "How is being heavily supported by wealthy attorneys living out of the district (Arbor PAC) honorable? It is very clear that these rich homeowners want to support Pool in "protecting" their single family neighborhoods by blocking the diversity I promote and are doing so by stooping about as low as a political campaign can go. ... If politicians are going to rely on PACs with deep pockets to do their dirty work, what's the point of any fair campaign rules existing at all?" – Nina Hernandez 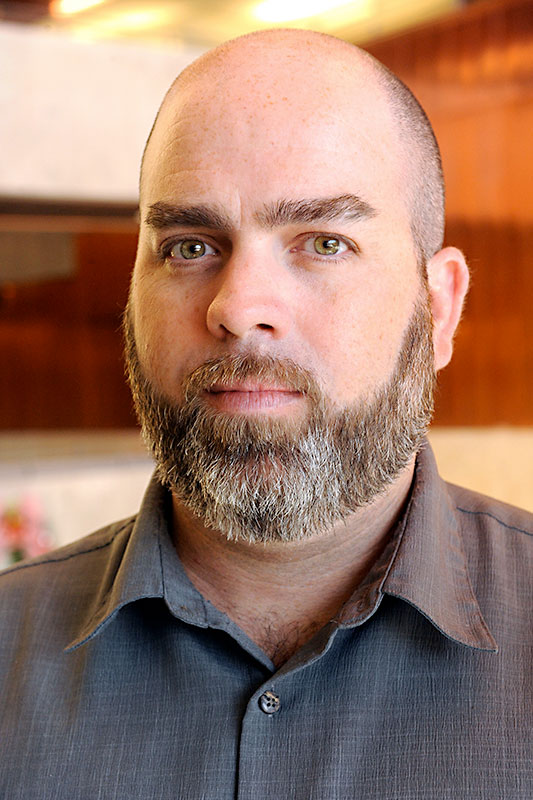 Not That Manchester!: Social media briefly buzzed this week with the apparent revelation that Douglas F. Manchester, CEO of (San Diego-based) Manchester Financial Group, was a major donor to the Move Austin Forward campaign supporting the $720 million transportation bond – and also an enthusiastic supporter of Donald Trump. A flurry of web searches and emails revealed that the donation originated with (Austin-based) Man­ches­ter Texas Financial Group, helmed by son Douglas W. Manchester. The Chronicle is familiar with the confusion ("Correction: There Are Two Manchesters," March 22, 2013), but our inquiries this time did produce an effusion from Move Austin campaign chair, Jim Wick. "We have a lot of donors interested in getting traffic moving around here. I guess that stands in stark comparison to [Jim] Skaggs, [Bryan] Hardeman, [Janis] Burrow, and [Jeff] Sandefer – the four who are almost solely responsible for the Anti-money to HTS [Honest Transportation Solutions] PAC, and who have all collectively donated what looks like hundreds of thousands of dollars, if not more than a million, to Republicans at every level from the Travis County GOP (who endorsed against the bond, the only group in town) to candidates for President and Senate." – Michael King

C You Next Tuesday: Sid Miller, Texas agriculture commissioner and state lackey to Donald Trump, issued an all-caps and poorly edited Twitter tirade on Tuesday – his vitriol aimed at Hillary Clin­ton. The word vomit overflowed the toilet bowl at 3:26pm when Miller posted the results of a poll from the Pennsylvania Auto Alliance, which favored Trump over Clinton 44 to 43. Except when Miller tweeted the results, he didn't say Trump beat Clinton; he said Trump defeated "Cunt." The tweet was quickly deleted. A spokesperson for the commissioner said the account was hacked, then backtracked and said a staffer screwed up their copy-paste job. (It's worth noting that Miller trashed Clinton the other week for using staffers to craft certain tweets from her account.) Miller later issued a statement, calling use of the word "vulgar" and "offensive." Our take: Miller's an asshat, and an inadequate agriculture commissioner to boot. – C.H.

Our Helpful Daily: The Austin American-Statesman has put together a side-by-side comparison of Trump and Clinton so that readers can carefully elucidate the complexities and nuance between the two voting options. With so many of us undecided between a racist demagogue and an experienced, non-racist politician, the breakdown of each candidate's clearly defined policy stances – from immigration to the economy – is invaluable as we stand at these delicate crossroads. One believes climate change is a hoax crafted by the Chinese; the other does not. One promotes banning Muslims from the U.S.; the other does not. One believes women should be punished for abortion; the other does not. One condones sexual assault and misogyny; the other does not. One is going to trial for allegedly raping a 13-year-old girl; the other is not. The choice is clearly a difficult one to make for discerning voters, so we'd like to extend a deep thanks to the Statesman for aiding us in the process.

The paper's Tara Trower Doolittle has offered the following as explanation for eschewing an endorsement: "In a political cycle that has already generated more heat than light, even with the talents of our writers, it is unlikely that we would unearth any new nugget that might sway readers from one candidate to the other. The presidential candidates do not sit down with our editorial board, so we are operating off the same sources of information and sound bites as the average voter." (Try not to remember that as journalists it is our job to fact-check and dig for information not readily available to the average voter.) If you're wondering if perhaps the Statesman was just too busy endorsing local candidates in races arguably even more important to their demographic than the national race ... no. The editorial board sidestepped these important races, too. Meanwhile, the Chronicle's full list of local, state, and presidential endorsements can be found on p.6. – Mary Tuma

She Seems Nice: The Honest Transport­a­tion Solutions PAC folks have been less than precise about complying with Austin's campaign finance disclosure laws, particularly the recent requirement that campaigns list their top five donors on every campaign communication. When Spectrum TV's (formerly Time Warner) Jeff Stensland reported on the HTS failure to comply (also true of Mike Levy's Sensible Transportation Solutions PAC), campaign treasurer Kathy Pillmore blamed the city for providing insufficient information, arguing the requirement is "buried in the administrative section" of the city's code of ordinances (i.e., the section dealing with campaign finance reports). On her Reddit postings, Pillmore was a bit more frank: "This is a bullshit ordinance designed to limit opposition to City Hall by giving them additional leverage to go against opponents right before the election like we're seeing here. Some smart attorney will make COA eat it eventually." Pillmore's Reddit handle is "2ndCityhalfwhite" – an apparent racialist jab at Pres­ident Barack Obama, to whom she refers in other posts as the "Hawaiian lame duck" and the "Chi-town shyster," whose "puppetmaster" is supposedly George Soros. – M.K.

Pissed Planet: Planet K owner Michael Kleinman remains outraged at the Texas Department of Transportation, which is apparently still determined to enforce limitations on highway signs – specifically, Planet K's Bee Cave's store sign in support of 2012 presidential candidate Ron Paul, which TxDOT had insisted was subject to time limits on political campaign signs: to be displayed no more than 90 days before and 10 days after an election. Kleinman took TxDOT to court, and the 3rd District Court of Appeals ruled that "content-based" restrictions, such as those defining political signs, are unconstitutional. Nevertheless, TxDOT recently issued a press release reiterating the restrictions, and Kleinman responded with a demand that the agency retract the release and end any attempt to enforce the sign limits. "They are certainly guilty of demonstrating their contempt for the court ruling," said Kleinman, "and the public trust they have been given to enforce the Consti­tution of Texas and the United States." – M.K.

For Those About to Run-Off: The Travis County Clerk has listed information for potential run-off elections. Election day would be Dec. 13, with early voting beginning Dec. 5. A run-off will take place only if candidates in local races (City Council, AISD, ACC) fail to attract more than 50% of their particular race's vote. We'll have run-off details and endorsements after Election Day. – C.H.