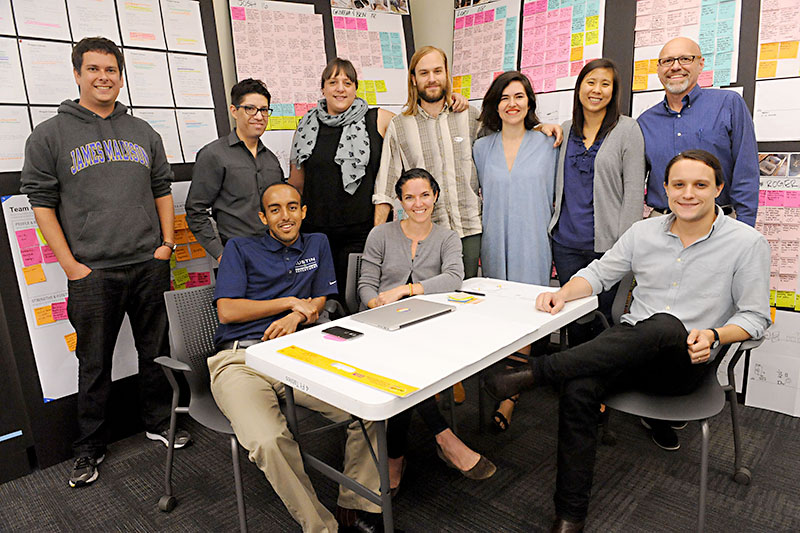 Design, Technology, and Innovation Fellows at the city's Office of Innovation (Photo by John Anderson)

What is design? Is it a process? An art? A way of thinking? A type of communication? Ask any person on the street: You'll get answers detailing architecture, typography, fashion, or Herman Miller chairs. Ask an actual designer, and you'll get a different response. Four of the five surveyed for this story paused, took a deep breath, then said: "That's a great question."

Designers and members of the public who wish to fashion an answer to that question will have their chance beginning Monday at the inaugural Austin Design Week, a five-day event focused on forging a community among local designers, but also on getting Austinites thinking about how design can help solve city problems.

Design Week is the brainchild of Danielle Barnes, the regional director of tech-career trainers General Assembly. When she arrived in Austin two years ago, Barnes expected to find the type of design week offered in most major world cities, including her previous residences, San Francisco and New York. When she didn't, she teamed up with her colleague Candice Digby and IBM Design's Amber Atkins to form an advisory board of designers from different fields, then broadcast a call for entries. The resulting schedule includes studio tours, art workshops, a storytelling night, and moderated discussions, with an emphasis on interdisciplinary events. "We tried to design the week so it wasn't just, 'Here's an event for architects, here's an event for graphic designers,' but instead offer events that blur those lines," said Barnes. The team also included several sessions that explicitly focus on how design can address local problems – challenges like traffic, the rising cost of housing, and homelessness.

So, what is design? Most individuals interviewed for this story agreed that design is at its core a thought process or problem-solving approach. It first pinpoints the problem to be solved, then creates and tests several potential solutions before collecting feedback on those solutions and revising its approach.

Those solutions may or may not be tangible. "Sometimes you do build a product – an app or a website – but sometimes what you design and build is just a better process, or an ability to bring more people to the table," says Jess Lowry, associate director of UX and design research at design firm MU/DAI and a Design Week presenter. "The solution isn't usually the thing to focus on, at least not in the beginning; it's really understanding the problem space." For instance, she says, to fix Austin's sidewalks, a designer wouldn't start by dreaming up the most attractive streetscape; instead, she'd study pedestrians, including those who push strollers or use wheelchairs, to understand how they use sidewalks and what their needs might be.

That approach makes design a handy tool for tackling complex problems. One such local initiative is being spearheaded by the Design Institute for Health, an 18-month-old partnership between the Dell Medical School and the College of Fine Arts at the University of Texas. "Our role is to try to shape the health industry to benefit more from design," says Executive Director Stacey Chang, whose background is in health care design. "Almost every other consumer or commercial industry has embraced design in really effective ways, and health and health care is one of the last to do it."

The institute is collaborating on a project with the Fusebox Festival, Thinkery, John­son & Johnson, local artist Jennifer Chen­o­weth, and the developers of the thinkEAST project near Govalle Park. Their goal is to make thinkEAST – an affordable development geared toward artists – a catalyst for community health. Traditionally, Chang says, this would mean building sidewalks and exercise equipment, or adding a clinic to the property. But design thinking would call that a rush to the solution. First, what is the problem to be solved?

That's where Chenoweth's XYZ Atlas, a strategy for mapping the emotional landscape of a place, comes in (see "Jennifer Chenoweth's XYZ Atlas," May 13). Between 2013 and 2016, Chenoweth asked thousands of Austinites questions like "Where do you go to reconnect with nature?" and "Where was it that you were injured or assaulted?" The answers, captured in XYZ Atlas, reveal where in Austin people feel whole and healthy, and where they feel unsafe, angry, or depressed. The Atlas can be used to collect insights about the quality of health in the neighborhoods around thinkEAST. "For the first time we can have a conversation with the community about their health in a way that's really emotionally relevant, not just cerebrally relevant," Chang says. The team will share its initial ideas for embedding health in thinkEAST during a tour of Chenoweth's Fisterra Projects Studio.

Design has also entered City Hall through the Office of Innovation's Design, Tech­no­lo­gy, and Innovation Fellows program, which hired its first 10 recruits in August. Inspired by tech-government partnerships like Code for America and the U.S. Digital Service, the program pairs fellows with city staff to solve problems using design. One team is helping Austin Resource Recovery figure out why the city's progress toward its zero-waste goals stalled short of diverting 50% of materials from the landfill by 2015. They're doing field research in residents' homes to understand their behavior and attitudes around recycling, as well as asking property managers why recycling rates are lower in apartments than single-family homes. Next, the fellows will design and test potential solutions, which could include everything from a special recycling bin for the bathroom to a new way of explaining which materials can be recycled. 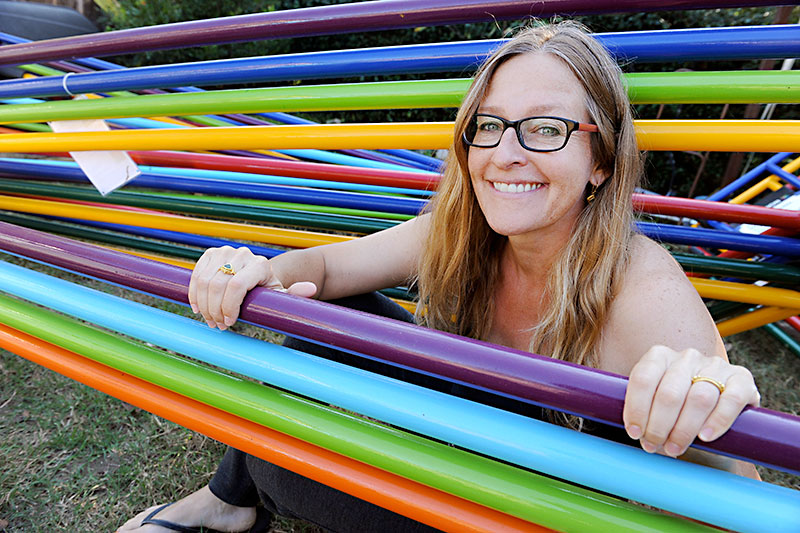 While the fellows have experience working with big names in the design industry, program lead Ben Guhin says applying design in the public sector requires adjustment. In government contexts, "I've found that identifying myself as a designer can often lead people to think that I'm a decorator," he says. "In some ways it's more effective to describe myself as a strategist or a facilitator, because I think a lot of the value that designers can bring to government right now is around designing the conversation."

Government moves slower than the private sector. It's required to be transparent and accessible in ways that companies are not. For instance, says the city's Chief Inno­va­tion Officer Kerry O'Connor, when the fellows collected information about recycling behaviors in people's homes, they had to determine whether the colored sticky notes typically used for brainstorming were a "local government record" that needed to be retained by the city. "When I tell designers that, their minds are blown that you would have to go to that level of detail," O'Connor says. "But government has these laws so that we build trust with citizens, and we have to be very open and accountable in our design methods."

Despite the challenges, design helps city staff and elected officials see previously unnoticed connections between issues, and it helps them understand the complexity of a problem.

"Government has a reputation that is unsavory, and as a consequence we may get hunkered down," O'Connor says. "Design forces you to get out of your chair and have real human conversations with people. For example, the Homelessness Out­reach Street Team is meeting people and trying to uncover gaps in why we're not able to get them into services and into housing. We want to get out and meet people where they are, learn more about what they're facing, and then go back to them and test out our ideas and get their feedback."

It's tempting to think of design as a panacea, O'Connor and Guhin say, but particularly in the public sector, it only works when paired with an open mind. "Throughout Design Week we're going to hear a lot about how designers are really great, and how the world just needs more designers," Guhin says. "I think one of the most important things about being a designer in government is humility, and realizing how much you don't know."

Austin Design Week includes several events about applying design to civic and social problems. All events are free and open to the public. For a full schedule, details, and to register, visit www.designweekaustin.com.

Role of Design Within Government