The several dozen groups formally supporting the bond include many predictable ones: Alliance for Public Transportation, ATX Safer Streets, Austin Metro Trails & Greenways, Bike Austin, Reconnect Austin, Walk Austin, and a couple dozen Travis County Dem organizations (including the TCDP). And there are the inevitable underwriters of big bond campaigns, which have both the inclination and resources to support such campaigns as well as undeniably vested interests among their corporate members: American Council of Engineering Companies, Austin Apartment Association, Austin Board of Realtors, the Greater Austin Chamber of Commerce (several of the smaller chambers), and the Real Estate Council of Austin. (Much of the money for Austin Forward PAC, running the campaign, came from this collection.) 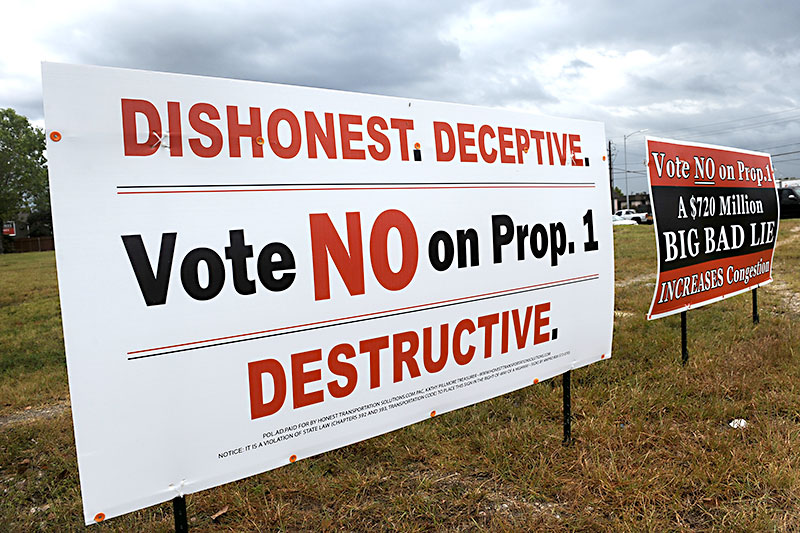 There is also a handful of groups that might seem a little out of place on a big transportation bond, yet which reflect an even broader range of support: The Austin Technology Council (a new player in city politics) is here, and the unions on board include not just construction-related groups like LiUNA, but Education Austin, the Austin/Travis County EMS Employee Association, and the Austin Police Association. Here as well are a range of environmental groups like the Sierra Club, the Waller Creek Conservancy, the Hill Country Conservancy, and even a couple of social service organizations (Housing Works, One Voice Central Texas).

Jim Wick, who took a leave from the mayor's office to manage the Move Austin Forward campaign, has been generally upbeat about the bond's prospects. The campaign has garnered a broad range of official support from those organizations, and it is certainly well-funded: The 30-day-out campaign finance report reflected more than $662,000 in contributions, with $315,000 cash on hand. (In other words, plenty for TV ads.) Early in October, Wick released the results of an in-house poll, showing support for the bond at 56.7% to 25.4% (17.7% undecided). But that was quickly followed by an independent Austin Monitor poll that was essentially tied: 46-45%, with 9% undecided. (The polls' methodologies differed, so may have captured very distinct voter groups.) Based on recent bond elections – victory for the Central Health District, defeat for the 2014 transportation bond and the 2015 Travis County Civil Courthouse – bond resistance appears to be growing (at least in suburban precincts), so a tight election, greatly dependent on which voters are motivated to read to the bottom of the ballot, seems more likely than not.

One unexpected recruit to the campaign is Adler's 2014 mayoral opponent, former Council Member Mike Martinez, who has been making the rounds of various interest groups arguing the need to approve the bond. He told the Chronicle that while plenty of people have second-guesses about this or that aspect of the overall package, "I think it will pass, because there's a strong sentiment that we need to start doing something, and this is a place to start." Respond­ing to criticism that this bond won't complete all the necessary projects, Mayor Adler said, "Almost wherever you are, this is the next thing that has to happen."

The mayor has steadily argued that while "there's never a perfect bond" – and this one is constructed of the usual compromises – it represents a substantial attempt to address a range of traffic and infrastructure work that Austin needs badly to get underway. The state has failed to live up to its responsibilities on either highways or major corridor roads that were once state highways, he says, and that leaves the cities "to be creative about the tools that are left to us."