Mayor Steve Adler, riding one of Austin’s many modes of transportation, celebrates “Bike to Work Day” in May. (Photo by Jana Birchum)

A few weeks ago, Mayor Steve Adler delivered a brief pitch on the mobility bond ballot proposition to a Downtown Demo­crat­ic group. It was a fairly rushed and truncated version of what has become a serial stump speech, and the mayor had time for only a couple of questions before rushing off to another event. The audience was friendly but skeptical – "Are we losing vehicle lanes?" was the first question, and it's one that has pursued the campaign. ("No," came the quick answer, although a better one might have been, "It's complicated.") After a few minutes, the mayor conceded the stage to three City Council members: Delia Garza, Leslie Pool, and Greg Casar.

After miscellaneous remarks, within a few minutes the three council members found themselves embroiled in a debate over Austin's terrible traffic and hapless solutions, with one audience member berating them for not providing a rail choice on the ballot – specifically, a rail segment that would run from Downtown to the airport. The speakers expressed their misgivings – most substantively, that the voters had rejected a rail plan just two years ago – but that didn't placate their accuser, who pointed out that most major American cities already have a working rail system – and one need look no further than Houston or Dallas. The council members (like Adler before them) were reduced to reassuring their audience that Austin would certainly have a rail transit system ... someday.

The moment provided an amusing snapshot of plenty of transportation discussions in Austin. When it comes to considering what to do about Austin's explosive growth and the distressing traffic it has spawned, we're all armed and ready to fight the last war, and we all seem to know more than the professionals we employ to address the problems. We all want the roadways cleared in front of us while we find ways to create a serious, citywide mass transit system – and we would all greatly prefer that it doesn't cost very much. Indeed, Austin's transportation situation has grown desperate enough that there are now groups advocating a system of gondolas to rise over major commuter routes, like flying metaphors for our persistent inability to do anything about the existing gridlock on the ground. (The gondolas follow previous attempts to evoke broader public interest in monorails or commuter pods, and alas, are likely to meet the same result.)

We all want the roadways cleared in front of us while we find ways to create a serious, citywide mass transit system – and we would all greatly prefer that it doesn’t cost very much.

Into that void stepped Mayor Adler with his "Go Big" mobility bond, the $720 million investment in regional highways, major streets, bike trails, and sidewalks that Austin voters are now considering on their early ballots, leading to a day of reckoning Nov. 8. Based on previous bond history, the mayor has gone big in terms of the size of the proposition, but he certainly didn't go early. Bond planning and especially bond public outreach take time – the conventional timeline is about 18 months to election – but this bond began to take serious shape only this past May, when Adler presented to Council the broad outlines of the proposal. Although the overall shape – three "buckets" of projects to cost roughly $720 million – has remained the same, the package went through several iterations before Council finally approved placing the proposition on the ballot.

The mayor has responded to the complaints (on the dais and off) of a "rushed" process by recalling that he had intended to bring the plan forward earlier, until the months-long controversy over regulating transportation network companies and the subsequent May referendum election overwhelmed most other city business. "Uber and Lyft sucked all the air out the room," says the mayor. He also argues that this bond is a natural outgrowth of the 2012 transportation bond, which helped underwrite several of the "corridor plans": the detailed examinations of traffic and land use issues along the seven major corridors that form the central focus (and $482 million portion) of the overall proposition.

Nevertheless, the foreshortened process meant, initially, that the mayor had to cajole his Council colleagues to finally arrive at a formal proposition. It took a couple of months to shape an initial proposal for staff direction, that vote coming after midnight, June 24, following amendments that maintained the total dollars but shifted the proportions somewhat. CM Sheri Gallo won a 10-district division of funding for sidewalks (a move CM Ora Houston voted for, and later regretted – her district has the greatest sidewalk needs). That resolution passed 8-3 – Houston, Garza, and Ann Kitchen dissented, in a sign of things to come.

In August, when the matter returned to Council, Kitchen (who had initially preferred a smaller proposal) won concessions for additional planning funds allocated to South Austin roads, and more sidewalk funding was moved to the Eastside, in part a response to the earlier Gallo amendment. The various adjustments were enough to deliver the mayor on Aug. 11 a unanimous vote on the first two readings of the ballot proposition. Adler celebrated: "The consensus we achieved tonight with unanimous approval of the ballot language for the Smart Corridor plan reflects the widespread support in the community to address traffic congestion, improve transit, increase safety, and build walkable neighborhoods. This sets up Austin for a big win." 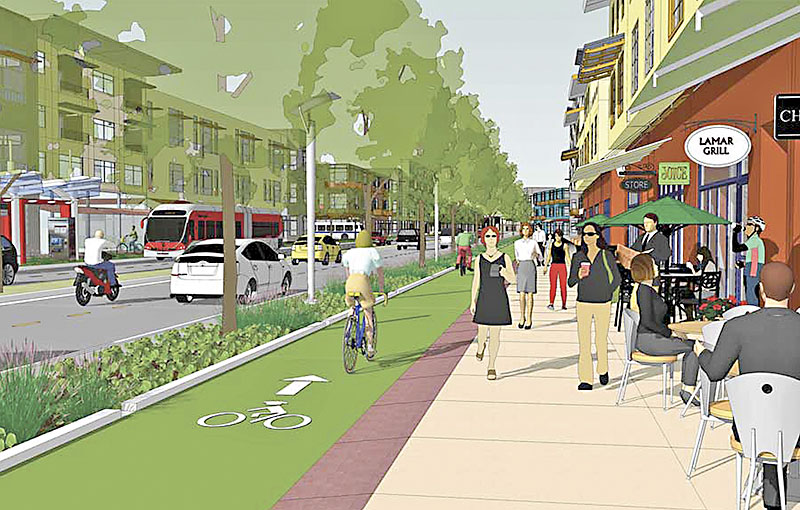 This rendering of South Lamar imagines improvements to the roadway working in parallel with anticipated changes in land use and development. Critics charge that the corridor changes should instead prioritize car travel before other modes, including adding vehicle lanes wherever possible.

The mayor's big win was temporary. The following week, when the matter came back for a third reading, Kitchen had moved into the supporters column, but the discussion bogged down when CM Ellen Troxclair proposed a more explicit ballot statement of the eventual tax impact. Troxclair would soon be joined by CM Don Zimmerman, who denounced the city's attorneys for "lobbying" the council instead of providing opinions that coincided with his own; he also objected that the ballots would not allow voters to choose among the three project "buckets." Failing in their attempt to amend the language, Zimmerman and Troxclair abstained, and were eventually joined by Garza, who said she still believed the process had been too rushed, and that the size of the bond, if approved, would likely obstruct passage of future propositions on other city needs, especially affordable housing. In the end, Houston was the only outright nay – she also objected to the rushed process, and reiterated her persistent charge that the 10-1 Council needed to start fresh on its own projects, and not rely on work (like the corridor plans) passed down from earlier – and presumably less representative – City Councils.

That made the final vote 7-1-3 – a majority, but not the sort of official unanimity that has historically preceded most bond campaigns within the city.