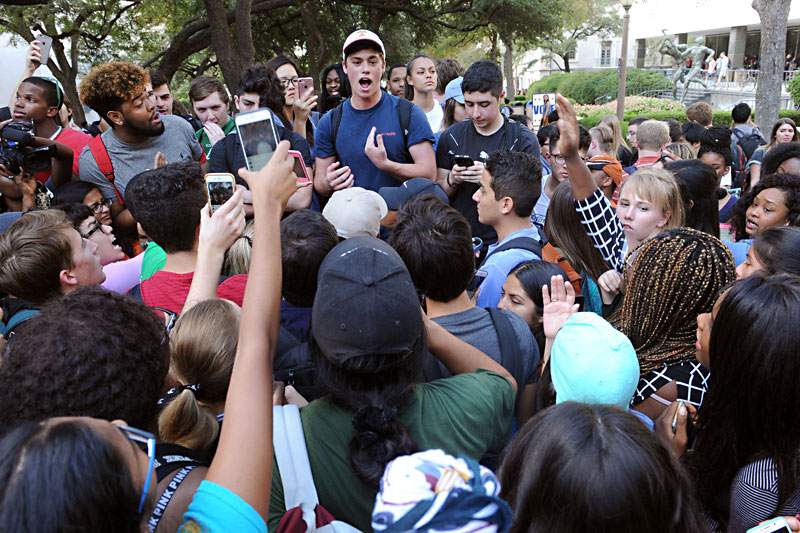 The Young Conservatives of Texas attempted to ruin the reputation of perfectly innocent brownies on Wed., Oct. 26, when it held an "Affirmative Action Bake Sale" – which found white students charged twice as much for provided treats as minorities in their classes. The stunt collapsed quickly when organizers were challenged by students who support the school's diversity-based admissions policy. (Photo by John Anderson)

The next regular City Council meeting is Nov. 3, when they'll discuss demolition permit processes, the Champions Tract rezoning, Dripping Springs wastewater discharge, a potential deal between APD's DNA lab and Dallas County, the spay/neuter policy at the Austin Animal Center, and other items. Council will also cancel its Nov. 8 work session – seems something else is happening that day.

Women are beating men to the Texas election booth. Analysis of first-day voters by a GOP policy group shows 54% of voters statewide were female and 42.2% male, with 3.8% unknown.

Early voting numbers are up throughout the country. Here in Travis County, more than 85,000 people cast their ballots during the first two days of the advanced period – 11.7% of all registered voters. Those figures are up more than 50% over 2012's first days of early voting, the last time a presidential race was on the ballot. Numbers from Wednesday were still getting compiled by the county clerk when the paper went to press.

AISD trustees voted this week to extend Superintendent Paul Cruz's contract through 2019, and agreed to a 4% pay increase in line with that given to other district employees earlier this year. The board praised Cruz for increased graduation rates and an aggressive plan to increase enrollment.

District 7 residents are complaining that election campaign signs for D7 council member Leslie Pool and AISD board candidate David Quintanilla are being placed in their yards without their permission. Pool has blamed overenthusiastic Workers Defense Action Project volunteers.

Roger Wade retires this week from the Travis Co. Sheriff's Office. Wade spent 32 years with the TCSO, most recently as the public information officer, handling contact with local media. To that end, the Chronicle wishes him an enjoyable retirement. Wade was a dependable PIO. Grade: B+.

U.S. Rep. Michael McCaul told the Texas Tribune he's focused on helping Donald Trump become president, and wouldn't say whether he'll challenge Sen. Ted Cruz in 2018. He criticized Cruz for absentee representation, and reiterated his support of Trump, whom he's supposedly advising on "national security and debate preparation." (Great job!) "I'm not going to be associated with everything that comes out of [Trump's] mouth," said McCaul. Guess again.