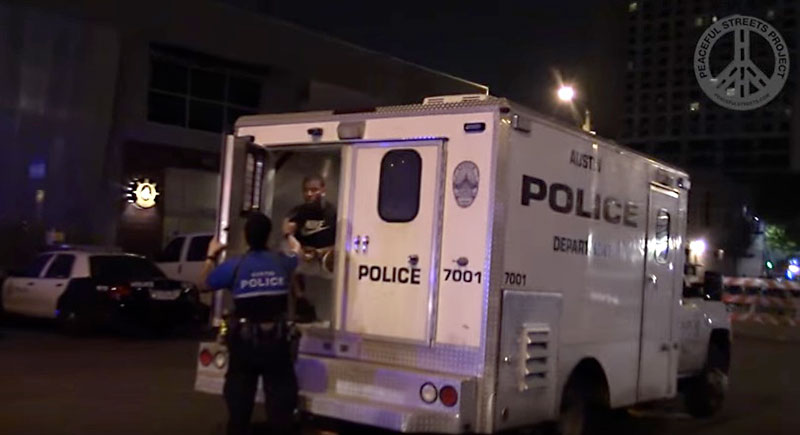 A screengrab from the March incident that earned three officers suspensions, captured by the Peaceful Streets Project

Police Chief Art Acevedo issued suspensions to a lieutenant and a sergeant on Monday. Both were in the chain of command of patrol officer Cameron Caldwell, the Downtown cop suspended 45 days in August for his March 17 pepper-spraying of an arrested 25-year-old who had already been detained within the back of a prisoner transport van.

The sergeant, 21-year-veteran Scott Stan­field, received a 30-day suspension and a one-rank demotion to corporal/detective after an Internal Affairs investigation concluded that Stanfield "failed to complete a thorough review" of Caldwell's March 17 pepper-spraying, which was thrust into the public eye the next day when cop watchers from the Peaceful Streets Project posted video of the incident on YouTube. Internal Affairs opened its review of Stanfield's actions through the five months following Caldwell's spraying. Investigators found Stanfield to have "neglected and failed to perform his duties on several other" response to resistance (R2R) incidents, "including failing to properly notify his chain of command" (i.e., his lieutenant and commander) and neglecting to write supplemental reports, as per department policy. Stanfield's disciplinary memo indicates that the sergeant also skipped out on counseling an officer he was assigned to work with after the officer had violated a department policy. Acevedo charged him with "not only insufficiently supervis[ing] his subordinates, but ... also hinder[ing] his supervisors from uncovering these deficiencies."

In addition to the suspension and demotion, Stanfield has been barred from promoting for the next two years, must stand on probation for one year, and waives his right to appeal or otherwise contest the discipline.

The disciplined lieutenant, Allen Hicks, received a 45-day suspension and demotion of two ranks to corporal/detective after IA found that he'd overlooked an initial review of Caldwell's pepper spraying (only eventually doing so after he received a May directive from his commander to look into the incident) and in fact directed Stanfield not to complete a review of the incident when it was brought to their collective attention. IA's zoom-out on the five months following the March 17 arrest found "similar incidents" in which Hicks "neglected and failed to perform his duties on several R2Rs." Acevedo wrote in his disciplinary memo that Hicks often failed to document policy and training issues, neglected to supervise his subordinates and review the progress of certain administrative tasks, and failed to notify his commander of more than one R2R incident. The investigation concluded that Hicks often changed title codes of R2R incidents without "doing a thorough review of the information available to him," thereby hindering the ability of supervisors responsible for auditing response to resistance incidents and "prevent[ing] his supervisors from uncovering and resolving any deficiencies."

Hicks received similar disciplines to Stanfield, in addition to his suspension and demotion. The 19-year veteran remains on probation for one year, and cannot contest the discipline.