It's been 143 years since Travis County elected a Republican into this office. Odds are, with or without our endorsement, history won't change in this election. Moore has been an assistant district attor­ney, worked four years as county attorney, filled in for county commissioners, embedded with Lloyd Doggett, and most recently served as an assistant attorney general for the state of Texas. If the D.A. job values administration over litigation, she's certainly more than qualified. It helps, too, that her primary issues – starting a Civil Rights Unit to handle officer-involved shootings, ramping up environmental protection efforts, and restoring funding to the Public Integrity Unit – line up with our ideals. (We're also a fan of her intention to create policy that would allow defense attorneys to present evidence before local grand juries.) Moore's opposition, Republican candidate Maura Phelan, brings her own set of strong ideas to the ballot. We applaud her emphasis on 24/7 intake attorneys to handle cases more quickly, as well as her intended focus on mental health cases and the implementation of a multi-pronged sexual assault unit. Our choice is Moore, however. 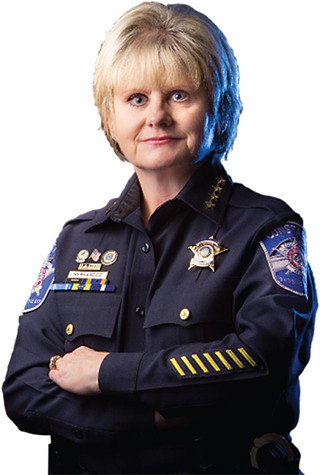 Joe Martinez, the Republican candidate, wrote in early October that the "stark choice" in this election depends on whether voters want a sheriff who will work with the U.S. Immigrations and Customs Enforcement, or one who will shun the government agency. Martinez wants Travis County to continue its current engagement with ICE, to which we say we have no interest in engaging with Joe Martinez. Fortunately, Democrat Sally Her­nan­dez is a formidable and personable alternative, longtime Austinite and current Precinct 3 constable who in her campaign has demonstrated an empathy for the mentally ill and a solid sense of priorities with respect to law enforcement. Hernandez has championed body cameras for her officers, in-person visitation for her inmates, and a desire to prioritize the prosecution of violent criminals over those cited for petty drug possessions. Oh, and she firmly believes that ICE has no space in county jails. For those reasons and more, we support her for sheriff.

Precinct 3 incumbent Gerald Daugherty is the lone Republican on the board of county commissioners and the only Republican to serve in that capacity since, well, Gerald Daugherty last decade. The white-haired wonk (scope his latest campaign commercial, a laugher) was first elected to the dais in 2002, then lost his spot to Democrat Karen Huber in 2008 before regaining it again in 2012. Since, Daugherty has been a tireless advocate for highway construction and traffic/mobility initiatives, with an eye toward keeping taxes from skyrocketing. The role of the county commission, he says, is to create "as effective a county government as you can with as small a tax burden you can come up with." Seated alongside three Democratic commissioners and one judge, that's been his cross to bear. Challenger David Holmes, a mediator and crisis communications consultant with experience working at the Lege, also sees traffic as a huge issue, but considers highway corridors as a piece of the mobility puzzle, not the sole contributing factor. He has advocated for bike lanes, and even noted Lakeway's use of golf cart lanes as an innovative installation brought on by resident interests. Off roads, Holmes has proven himself an advocate of resource conservation, mostly with regard to county deals with corporations, and creating a more sustainable environmental future for Travis County. That's a future we can get behind.