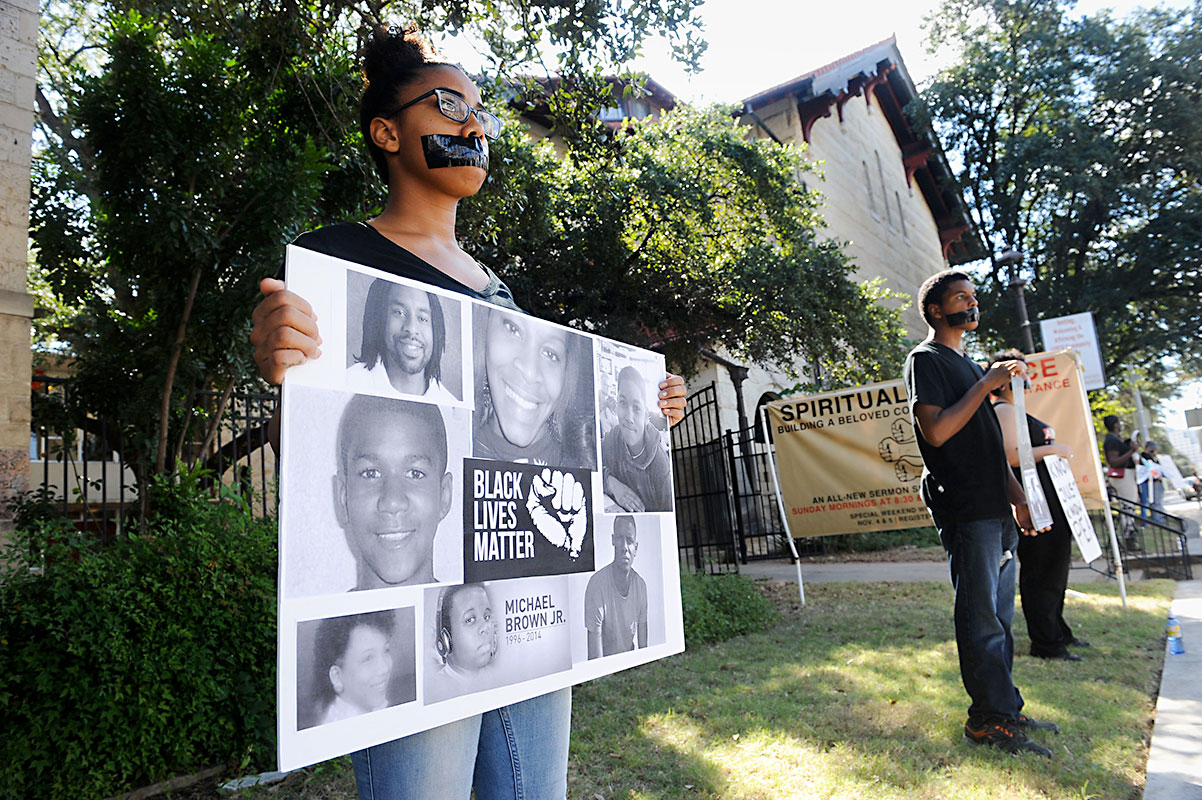 Local activists gather outside of the University United Methodist Church on UT's campus for the first "Silent Sunday," a protest calling attention to racial and gender injustices. Members of the Fresh Water Ministry, Black Lives Matter, and Women Ministers' Empowerment Network plan to continue meeting at the same location, at 10:30am on the third Sunday of each month. (Photo by John Anderson)

In the Grove: City Council met Wednesday evening with the CodeNEXT Advisory Group working on the land-use ordinance rewrite, and meets today (Oct. 20) for a relatively brief agenda that might be dominated by a preliminary review of, and first reading vote on the Grove at Shoal Creek planned unit development.

Hold that PUD: Multiple amendments are pending on the Grove proposal by developer ARG Bull Creek Ltd., and ARG wrote to Council Monday saying that if some of those amendments are adopted, it would withdraw its proposal and seek conventional zoning. The Bull Creek Road Coalition called ARG's claims "fear-mongering" and asked Council to reject them.

Austin Police Department officers shot and killed 26-year-old Micah Dsheigh Jester outside of her South Austin apartment on Sunday morning. The Statesman later reported that police responded to a call from Jester's boyfriend requesting a mental health officer when they encountered Jester, who pointed a weapon at officers that turned out to be a BB gun.

U.S. District Judge Sam Sparks dismissed the lawsuit filed against the city of Austin by Breaion King (at right) on Friday, citing a lack of specificity to King's allegations. King, the teacher whose June 2015 arrest made headlines this summer when video of the arrest got sent to the Statesman, can re-file against the city after addressing Sparks' concerns. Her excessive force lawsuit against APD Officer Bryan Richter remains pending in the court.

Texas Monthly is under new ownership. Emmis Publishing announced last Thursday that the magazine's assets have been sold to Paul Hobby, founding partner of Houston-based equity firm Genesis Park, for a cool $25 million – or just enough to pay for all that barbecue Dan Vaughn's bought on the Monthly's tab.

Capital Metro will offer free rides throughout the first day of early voting on Monday, Oct. 24, and again on Election Day, Tuesday, Nov. 8, on all MetroBus, MetroRapid, MetroExpress, MetroRail, and MetroAccess services.

Paxton's Union-busting: Texas Attor­ney General Ken Paxton intervened in an anti-union lawsuit filed by right-wing think tanks against the city of Austin, hoping to void negotiated contract provisions that grant union officials (in this case, Austin Firefighter Association leaders) paid leave to perform their union jobs. The suit calls the practice an illegal "gift" of taxes to a private organization; the union responds that it is a benefit negotiated with the city. AFA President Bob Nicks vowed to fight the lawsuit.