A rendering of the proposed Grove at Shoal Creek

City Council last took a stab at the Grove at Shoal Creek PUD in late September, when it arrived on the dais after a passionate debate over the tenant relocation issue at the Cactus Rose Mobile Home Park. Council members were already squeezed dry from having tackled a full agenda earlier in the day, and neighborhood activists populating City Hall grew aggravated at the thought of presenting their points to an exhausted dais.

Going into this Thursday's meeting, the Grove clearly has the direct attention of Coun­cil, which has spent time dissecting some of the proposed details in work sessions over these last three weeks. A central question has been whether the developer, ARG Bull Creek Ltd., will accept amendments proposed by the Bull Creek Road Coalition, or if extra requirements will make conventional zoning more profitable.

"[A] similar question the neighbors have asked me, that I can't answer, is if we ask for three times the amount of affordable housing than the applicant has proposed," Mayor Steve Adler said in a work session held Oct. 11. "The question that I've been asked by some of the neighbors is if the developer does not use the PUD because, for whatever reason, he doesn't think he can make it work with the requirement we put on it: What happens then?"

The mayor left that Tuesday session having directed staff to analyze each outcome. He had enough questions that a Saturday meeting originally scheduled to include Adler and his staff, the developer ARG, and representatives from the Bull Creek Road Coalition instead morphed into a three-hour meeting between the mayor's office and BCRC representatives. The group's vice president Grayson Cox said Adler was hoping to get ARG to agree to mediation with the group to finally iron out a common ground between what the neighborhood is suggesting and what the developer is willing to do.

Adler got his answer early this Tuesday, Oct. 18, when ARG circulated a letter to media outlets and Council which claimed in no uncertain terms: If the PUD passes with the BCRC amendments (which were put forward by Council Member Leslie Pool), ARG will pull the application and move forward with conventional, single-family zoning that would "result in far fewer transportation improvements, similar or worse peak hour congestion, less parkland, and a less walkable, sustainable and vibrant project."

To the possibility of mediation, ARG said in a statement: "ARG would like a vote. The Grove has been pending since Aug. 11 and the case has already been delayed twice. Furthermore, ARG has been working with the neighborhood, staff, and council on the project for nearly two years at this point. For every day the case is delayed, the cost of the housing goes up because of the carrying costs of the dormant project and the expense of the zoning. These additional and avoidable expenses add up with each delay and only exacerbate the housing crisis that Austin is currently experiencing."

In response, Cox said, "This letter is filled with fear-mongering claims that have been debunked many times before, and it is incredibly unfortunate to see [ARG attorney] Jeff Howard and [ARG co-founder] Garrett Martin continue their intransigence to mitigating the negative impacts of the PUD and increase community benefits to achieve true superiority that Austin and its residents deserve."

The conflicts center around Pool's proposals to lower the allowed traffic generated by the development and the office and retail caps, and efforts to increase the park acreage (by 1.75 acres) and affordable housing components. Because of the financial ramifications of those adjustments, a vote for those amendments is "a vote for conventional zoning and a vote against affordable housing," the letter stated.

The Grove heads to Council again this Thursday, Oct. 20, where members hope to pass the project on first reading as a "placeholder." The public hearing will be delayed until a subsequent date. Because of that, Council has asked the passionate citizens on both sides to hold off on storming City Hall until that date is set. 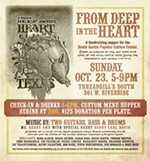