What can you say when you can't say "It's Only a Movie"?

A close friend called me Tuesday morning and asked plaintively, "Why can't I stop watching this train wreck?" "You're asking me?" I responded. "What clips do you think I'm surfing all day?"

We were discussing, of course, the U.S. presidential campaign. In a normal election year, active interest in the campaign is generally considered a sign of political engagement, even patriotic obligation. Yet as we watched the Donald Trump vs. Hillary Clinton debate on Sunday, family members found ourselves cringing in disgust and changing the channel, then guiltily returning to find out what we'd missed. That's a procedure normally reserved for American Horror Story.

This year, that seems to be what we're facing: a political nightmare from which it's impossible to awake. I didn't even plan a column on the subject this week, but it seems obligatory that the Chronicle add its singular voice to the chorus of astonishment rippling through the national political discourse. The standard-bearer of one of the two major U.S. political parties has eagerly unleashed the dogs of racism, misogyny, authoritarianism, and even dictatorship – vowing to imprison his opponent – into our community conversation. Even as his campaign implodes, it seems likely that the damage Trump has already done will be quite difficult to repair – and the dogs will be unwilling to quietly return to their kennels.

Trump is not entirely new. The mad bargain the Republican Party has made between corporate wealth and power, and racism and ignorance, over the last several decades, has always been volatile and barely controllable for only institutionally reactionary ends. This week the party leadership has been feverishly trying, without success, to ride to ground the runaway feral hog. Trump defiantly responded, "It is so nice that the shackles have been taken off me and I can now fight for America the way I want to."

After a campaign of persistent rhetorical (and occasionally physical) abuse of Mex­icans, Muslims, foreigners, non-whites, reporters, and women (etc.), the final straw was the anointed vulgarian's shameless bragging that as a celebrity "star," he could sexually assault women without fear of reprisal or even resistance. "You can do anything," he declared. "They let you do it!"

If nothing else, the prospect of that claim to absolute license ascending to virtually absolute power should give pause to any sane person, Democrat, Republican, or independent. Combine it with Trump's demonstrated aversion to learning anything about public issues, policy matters, the complexities and responsibilities of actual governance – he believes he already knows everything he needs to know – and voters have an absolute moral obligation to keep him as far from the presidency as humanly possible.

I've spent regular time in locker rooms over decades, and while (occasionally) young men there and elsewhere will talk idiotic, ignorant, and raunchy trash, in my experience the sort of arrogant sexual entitlement and contempt for women openly expressed by the 60-year-old, lifelong-privileged Trump is very rare. (By contrast, the taboos against gay-baiting are much weaker.) Nevertheless, like the reflexive laughter it evoked from his sycophantic companions, Trump's bragging does exemplify "rape culture" – the too-engrained notion that women exist solely at the indulgence of, and for the pleasure of, men. Perhaps Trump's exposure and disgrace can serve to push back, in a public way, against that contemptible cultural reflex.

That's a long-term project. In the short term, there is every reason to believe that win or lose, Trump and his cohorts have given renewed permission to sociopaths, authoritarians, and bullies of every variety. "Unshackled" by their would-be leader to behave like an armed and entitled mobocracy, people who once were constrained by public disapproval now feel increasingly free to insult or attack Muslims, immigrants, women, or anyone who might object to the nascent tyrannical impulse.

Writing in The Texas Observer, novelist Joe R. Lansdale describes his Trump-supporting East Texas neighbors as neither stereotypical "rednecks" nor the "uneducated," but rather the willfully, "happily stupid." They have adopted a religion of guns and power, and yearn for "a chance ... to feel important, to think they are standing on the lines of freedom, fighting back the zombie hordes." ("Why My East Texas Neighbors are Voting for Trump," Oct. 11.) Trump's relentless conjuring of "radical Islamic" hordes, of raping and murdering immigrant hordes, of African-American hordes presiding over "inner-city hells," feeds the unleashed lust for both imaginary enemies and imaginary targets.

Trump voters yearn, Lansdale writes, for "a world where the happily stupid, bless their little hearts, can thrive within their own fear-based mythology." Now that those dark desires and that simmering fear have been given full and open expression by a presidential campaign, they're not likely to be readily restrained by the inevitable electoral disgrace of their champion and his craven political surrogates. Trump, his party, and his kind have sown the wind. Come Nov. 9, the rest of us will reap the whirlwind. 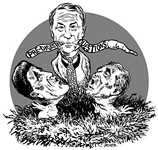 The Global Test
Whatever happens next month, we all have plenty of work to do 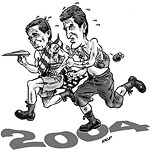 The Home Stretch
Texans should have a visceral sense of what's at stake in Bush vs. Kerry