Election notes from the city, state, country, and beyond 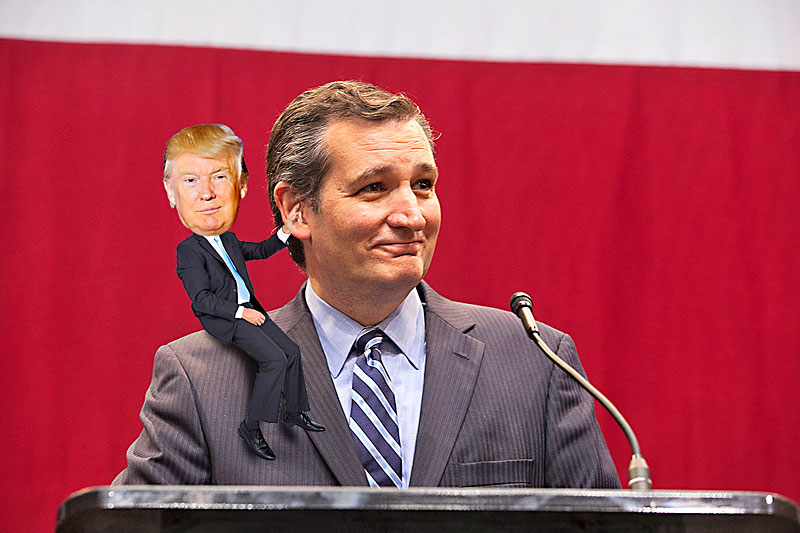 This Presidential Race? Just Relax and Enjoy It: Shades of Claytie Williams have begun creeping into the presidential race, and Texas Republicans don't know what to do with themselves. When tape emerged of GOP nominee Donald Trump boasting about using his celebrity to get away with groping women, we saw inevitable echoes of Texas' 1990 gubernatorial race, in which GOP candidate Williams lost to Ann Richards when he offered the infamous soliloquy about rape, "If it's inevitable, just relax and enjoy it."

Trump's national support is crumbling; the GOP is dismantling the presidential campaign; even House Speaker Paul Ryan abandoned the capsizing White House race in an attempt to hold on to Congress. But, as with Williams, the Texas GOP is still unsure how much it wants to distance itself from their nominee. Gov. Greg Abbott tweeted about "[d]eeply disturbing rhetoric by Trump," calling his recorded words "an insult to all women & contrary to GOP values." The governor immediately got lambasted by Trump supporters for selling out the party.

What he didn't do was actually unendorse Trump. Of course, neither did Lt. Gov. Dan Patrick, who tweeted "there is absolutely no excuse to ever talk about women in such a crude and demeaning way," but still stayed on as Trump's campaign chair in Texas.

Nowhere has the political schizophrenia been more apparent than with Sen. Ted Cruz, who famously failed to endorse Trump at the Republican National Convention, then backflipped in September to offer a halfhearted endorsement. Last week, Cruz's remaining dignity went up in flames after he was filmed by The Dallas Morning News sad-face phone-banking for Trump. After Friday's meltdown, a clearly chagrined Cruz tweeted: "NBC had tape 11 yrs. Apprentice producer says they have more & worse. So why not release in 2015? In March? Why wait till October? #MSMBias." (Translation: "NBC should have broken the story earlier so it could have helped me in the primary, not Clinton in November.") Even after this, Cruz continues endorsing Trump, claiming Hillary Clinton to be "manifestly unfit to be president" – unlike, say, a blowhard tax dodger who called Cruz's wife Heidi ugly, accused his father of being part of the John F. Ken­nedy assassination, and basically explained to a journalist how to use celebrity status to practice sexual assault. – Richard Whittaker

Workman in Absentia: Rep. Paul Work­man, R-Austin, has a reputation as a nasty campaigner, but he may be ducking the fight this time. His Democratic challenger for House District 47, Ana Jordan, has accused the GOP incumbent of dodging any face-to-face encounters, including those hosted by nonpartisan groups and even his own constituents. Jordan's campaign sent out a statement that the Austin League of Wom­en Voters canceled their planned Oct. 6 candidate forum because, after weeks of requests for confirmation, Workman told them he would be out of town that day. He also failed to submit answers for the League's nonpartisan voter guide, and only after Jordan called him out for failing to respond to an invitation for an Oct. 12 candidate forum hosted by the Oak Hill Assoc­ia­tion of Neighborhoods did his office confirm he would attend. – R.W.

And in This Corner: Don't expect Casey Ramos to come campaign knocking on your door the Friday before the Nov. 8 election. The District 2 City Council candidate and professional boxer will be at Las Vegas' Treasure Island Casino, where he's set to do battle against undefeated San Jose-based junior lightweight Andy Vences. Ven­ces is challenging Ramos for the WBC Conti­nental Americas title. – Chase Hoffberger

Saldaña's Stand: Austin ISD Trustee Paul Saldaña isn't on the November ballot, but he injected himself into the election hard on Oct. 5 by framing the fight for two seats as a race issue. In a Facebook post, Saldaña said that 75% of AISD students hail from minority households, and that since 2000 there have been at least three minority board members each year. He worried that number could go down to two this November, pointing to the empty seat in the At-Large Position 8 race between Cindy Anderson and David Quintanilla and District 2, where Andy Anderson challenges incumbent Jayme Mathias. Not so subtly, he noted how Quintanilla is Latino and Andy Anderson is African-American. Saldaña classified Cindy Anderson and Mathias as "Anglo."

Two days later, Saldaña clarified (or backpedaled, depending on your viewpoint) to say his post was "not about any candidates" and that "folks completely missed the point. This is about cultural competency, cultural value disconnects, equal representation, equity, social justice, etc.," he said. – R.W.

Council Member Zimmerman, Would You Like to See Our Ad Rates? A District 6 constituent informs us that loose sheets of paper touting D6 incumbent Don Zimmer­man's accomplishments were found in a stack of Chronicle issues at a restaurant near the council member's field office in Northwest Austin. The double-sided printout, eloquently titled "Highlights of Councilman Don Zimmerman's Accomplishments of First 21 Months in Office" boasts a number of bullet points, including his interruption of four affordable housing projects. While the sheet comes stamped with "Paid for by Austinites for Zimmerman" on the back, it's unclear whether the campaign snuck copies into the Chronicle pages or we should credit an overzealous supporter of the candidate. (Zim's campaign did not respond to us by deadline.) In either case, the insert is unauthorized. "It's a little bit unethical because you haven't asked permission," says Dan Hardick, Chronicle circulation manager. "And it's even worse if it's from an elected representative." – Mary Tuma

Ask Me Anything (So Long as It's About the Cost of Living): Affordability dominated the conversation during the Friends of Austin Neighborhoods' District 10 Reddit candidate forum on Oct. 10. Three of the four candidates – incumbent Sheri Gallo and challengers Nick Virden and Rob Walker – fielded questions from redditors about the Grove at Shoal Creek, the $720 million mobility bond, and property taxes, three issues that have shaped up to be flash points in the District 10 campaign. Walker stood strong against the Grove and the mobility bond, claiming both would add to traffic congestion and impact the environment, leading some to not-so-subtly accuse him of NIMBY-ism. Gallo and Virden, on the other hand, both voiced support for the Grove, holding the line that increased density, multiple housing types, and rezoning will help solve Austin's affordability problem. Challeng­er Alison Alter was absent from the forum because of illness, according to FAN. – Annamarya Scaccia

Houston Blasts Bond: District 1 Council Member Ora Houston, the sole Council vote against the Mobility Bond proposition, has signed on in opposition with the "Honest Transportation Solutions" PAC. This week she issued a press release denouncing the bond, saying, "The process was not inclusive. The process was not transparent. This proposal was conceived by an 'exclusive group of power brokers' in Austin." Houston charged that the full costs of the projects are uncertain, that there was insufficient citizen input into the planning, and that she had "no input" into the various aspects of the plan and the associated costs. (Houston did take part in several Council debates on the size, shape, and ultimate cost of the proposals, and at one point moved to shift several millions in sidewalk funding from her District 1 to other districts.) "I am a person of integrity," Houston wrote. "I will not be bought, bribed or bullied." She urged Austinites to vote against the bond. Thus far, it appears that the efforts of the bond opponents have been primarily funded by former Texas Monthly publisher Mike Levy; under the name Sensible Transportation Solu­tions for Austin, Levy filed a 30-day-out campaign finance report, reporting just under $20,000 spent on printing and signs. [Update 10/14: After our reporting deadline, the HTS PAC reported $61,000 in contributions, and $7,800 in spending, in theory holding $53,000, although the filing is incomplete. Levy, Brian Hardeman, and James Skaggs are the major contributors.] The Austin Forward PAC, supporting the bond, reported $662,000 in contributions, and has spent $307,000. As of Oct. 11, the PAC held $315,000 in cash on hand. – Michael King