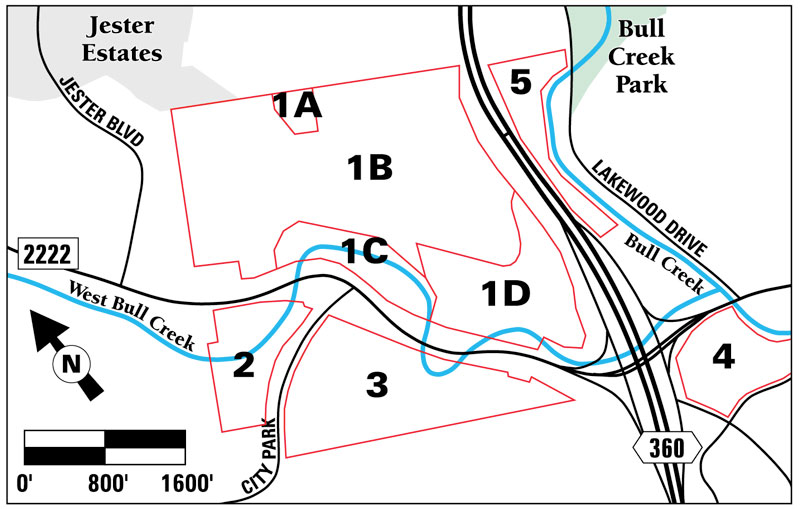 Sketch map of the Champion Tract (actually five tracts at the intersection of Loop 360 and RM 2222) from the Sept. 10, 1999 Chronicle. Named after the Champion sisters (the family has owned the land since the 1860s), the land has been subject of zoning and legal disputes with the city since the early Nineties.

City Council has been arguing over various pieces of the Champion Tracts since the mid-Nineties, and this latest variation – concerning Tract 3 of the five pieces surrounding the intersection of Loop 360 and RM 2222 – has taken its own good time, scheduled for a public hearing and third reading today (previous two approvals began in June). Today's vote (a zoning shift from general office to multifamily residential, with conditions) will likely pass easily, but not before nearby residents object to the details of density, traffic implications, etc.

At the Chronicle, we've been reporting on it nearly as long; Mike Clark-Madison provided a useful summary of the situation in September 1999 in "Corner to Corner." Among other lessons: Old zoning cases never die, they just reincarnate as amendments. For the record, this one didn't come up at Tuesday's work session, which was entirely devoted to traffic issues near the proposed Grove at Shoal Creek PUD, with more to come before its scheduled Oct. 20 command performance. (Anticipate at least another 20 years.)

Otherwise, it's a relatively light (63-item) agenda, although it includes plenty of contracts to keep department heads cooling their heels in the back of council chambers all morning, and a variety of proposed annexation hearings in the afternoon that could raise some dust if neighbors or Coun­cil Member Don Zimmerman are disposed to object. Debating highlights could include:

• Bonding Authority: Item 14 would approve bond issuance and sale of an eye-popping $120 million in Austin Energy "revenue refunding bonds," a standard debt issuance, but at AE's sometimes daunting scale, there might be dais dithering.

• Healthier Austin: Items 18-21 would approve various Health and Human Ser­vices contracts, the largest a nearly $10 million agreement (over five years) with Austin Travis County Integral Care covering mental health services, another with Austin ISD for case management services and outreach, and another with Wright House for HIV services. No trouble passing, but HHS services often get disdain or extra scrutiny from some quarters of the dais.

• The Champions Return: Items 24 and 53 included the legal amendments and zoning review of the Tract 3 settlement changes; earlier, some neighbors objected to a public hearing during summer vacation time, so here we are again.

• Manure Matters: Earlier in the year, Council wanted more information about a 10-year, $20 million contract with Synagro of Texas to manage "biosolids" at Austin Water's Hornsby Bend plant. Item 26 returns to that knee-deep discussion, with related Item 27 covering the revenue side of purchasing the resulting compost. Expect a fertile discussion.

• Meters Made: Austin Energy is embarking on a seven-year replacement project of residential meters, via (Item 30) a $29 million, 84-month contract with Texas Electric Cooperatives. Price tags that size, whatever the subject, tend to raise eyebrows and querulousness on the dais.

• Tees Time: The Parks and Recreation Department proposes (Item 34) a couple of newly conceived 10-15 year contracts for sportswear and screenprinting ($2.4 million overall), although some of that cost is recouped through sales to program participants. Zimmerman has already raised questions about the details, so PARD Director Sara Hensley is on notice.

• When Is a Carport a Garage?: Some homeowners enclosing carports have run afoul of regulations meant to discourage McMansions. Item 55 would amend the land-use code for more flexibility.

• Annex-itis: Items 57-62 are mostly small proposed annexations – the largest is the 246-acre Entrada tract in far northeast Travis County (contiguous to District 1), currently undeveloped but planned for single-family homes. Zimmerman has made a point of calling out and generally opposing all annexations, so the hearing for this item and the others might not be pro forma.

It's Archives Month, Dyslexia Month, Domestic Violence Awareness Month, and Susan G. Komen Day. The musical honoree is Keeper, about whom our colleague Kahron Spearman wrote, "Keeper is the sound of having been in love." Got a better recommendation?