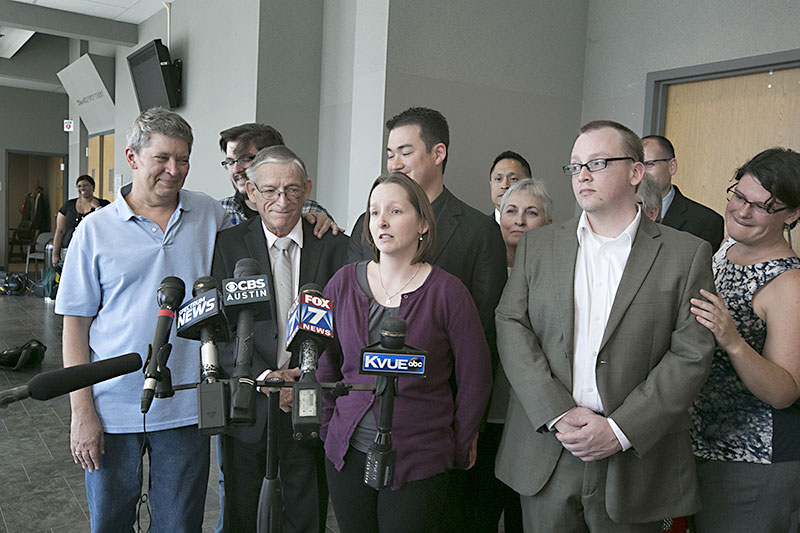 Mark Norwood was found guilty on Friday afternoon for the January 1988 murder of Debra Baker. Twelve jurors reached their decision after just 90 minutes of deliberation. Norwood was sentenced to life in prison after the verdict. The term will run consecutive to the life sentence he received when he was found guilty in 2013 of Christine Morton's 1986 murder. Norwood is expected to appeal the jury's decision.

The verdict put an end to a 10-day trial in Judge Julie Kocurek's 390th District Court, a courtroom filled with family members from both sides and representatives from nearly every local media outlet since its onset on Sept. 12. Norwood sat alongside his court-appointed defense attorneys throughout the trial and did not testify. He wore street clothes and sat largely expressionless, save for a small tic of his jaw and a furrow of his brow. Norwood, 62, was convicted on the circumstantial evidence determining that one hair found at the scene of Baker's murder carried his DNA. That, pieced together with strands of DNA evidence found on a blue bandanna down the street from Morton's home in 1986, proved enough to secure a verdict. For the Baker and Morton families, the decision puts to rest two gruesome and intimate murders that have gone unsolved for three decades.

The three days before closing arguments were dominated by discussions of DNA and a mad dash by the defense to bring into question the state's theories. Much of those efforts centered around the pre-recorded (from before the Morton trial) deposition of Norwood's old co-worker and friend, Louis Homer "Sonny" Wann, whose most direct and obvious association to the killings is that in 2011 he owned the gun that was stolen from Morton's home. Wann said during his deposition that he purchased the gun from Norwood. Norwood's defense attorneys Brad Urrutia and William Browning made efforts to discredit Wann, pointing in particular to statements made about the Travis County Sheriff's Office once trying to kill him, and to Wann alleging that the brother of Norwood's ex-wife is David Duke. (See below for clarification.) The prosecution did their own work to discredit those discrediting efforts, bringing in former probate Judge Guy Herman, who hired Wann to convert a garage into an apartment on his Brentwood home, to speak to his character.

Late in the trial, during the defense's time to call their witnesses, Wann's ex-wife and daughter, Sue and Mindy Payton, each took the stand. Sue, who divorced Wann in 1994, shortly thereafter sought a protective order against him, and said he'd often hit her. Norwood's attorneys tried to bring into evidence testimony from Payton about a bloody shirt she once found wrapped inside a paper bag in Wann's attic, but Kocurek wouldn't allow it. Kocurek also barred testimony about a woman, Ruth Elizabeth Bettis, whose body was found in 1982 on an East Austin property owned by Payton's family.

The defense's most direct effort to discount the conclusion that Norwood's hair being present at the scene meant that Norwood committed the murder came in the form of Technical Associates President Marc Scott Taylor, a forensic expert with somewhat dodgy credentials. (Taylor runs an unaccredited lab in Ventura County, Calif., and spent a few years during the Seventies and Eighties working on a television show about forensics.) Taylor was brought in to explain the life cycle of a hair: Once separated from a body, one cannot tell how old it is and cannot explain how it traveled from place to place – an argument for Norwood's case that may have fallen on deaf ears among the jurors.

In the courtroom following the verdict, Norwood declined to make any statement. Baker's daughter Caitlin, who was 3 at the time of her mother's murder, read a statement, speaking directly to Norwood. "I have heard no compelling evidence that indicates to me that you are not the man responsible for my mother's death," she said. She said she will be grateful to never see his face again.