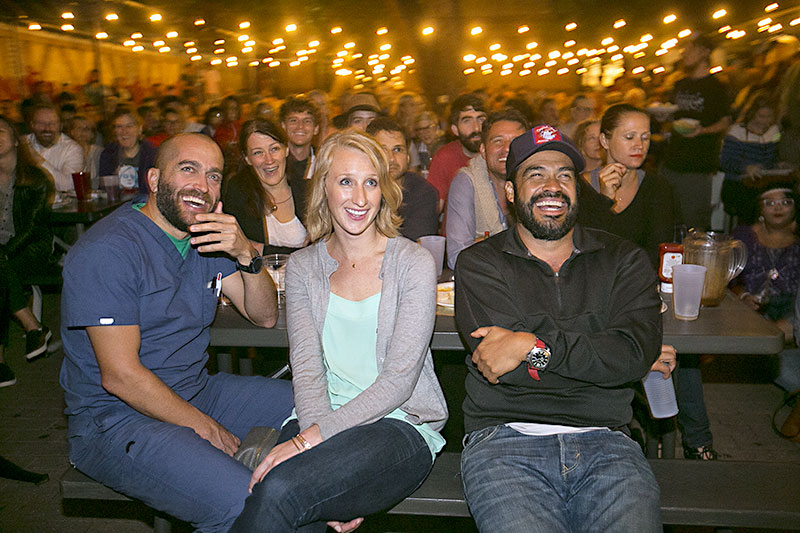 Attendees laugh at the candidates during the first presidential debate watch party at Scholz Garten on Mon., Sept. 26. By the way, the voter registration deadline is Oct. 11. Find out more at the Travis County Tax Office website:
www.tax-office.traviscountytx.gov/voters/voter-registration. (Photo by Jana Birchum)

No regular City Council meeting this week – the next is Thursday, Oct. 6, when they'll consider numerous hefty contracts and a handful of annexations. See "Council: Next Stop, ACL Fest."

Rep. Dawnna Dukes, D-Pflugerville, will quit the Texas House in January, triggering a special election some time in the new year. This comes days after the Texas Rangers handed prosecutors their report into potential charges regarding allegations she abused her office. More developments on this expected as soon as today.

A federal grand jury indicted Chimene Onyeri, Marcellus Burgin, and Rasul Scott on multiple charges, including the attempted assassination of State District Judge Julie Kocurek, on Sept. 20. Kocurek was shot at in the driveway of her Tarrytown home on Nov. 6, 2015.

Former Williamson County District Attorney John Bradley announced on Sept. 13 that he'll resign from his post as attorney general of the island nation of Palau at the end of November. Bradley received a 10-day suspension last year for insubordination when he sent a special prosecutor to attend a meeting while he went on vacation.

Dustin D'Amalfi, who left the Travis County Sheriff's Office after an investigation was opened into his using an unissued chemical agent to extract inmate Dacious Parker from his cell, was indicted last Wednesday for tampering with physical evidence and false report to a peace officer in that incident, which took place July 25, 2015. Parker was the inmate who escaped from Brackenridge Hospital on June 27, 2015.

AISD has hired Debra Dibble Boone as the new director of the Historically Underutilized Busi­ness program. Her job will be to create more diversity in awarded contracts.

Gov. Greg Abbott isn't backing down from pushing new rules, quietly proposed in July, that would force fetal remains from an abortion or miscarriage to be buried or cremated. Despite resounding opposition and concern over who will pay for the services from reproductive rights advocates, medical groups, and members of the funeral industry, the state plans to enter the regulations in the Texas Register on Sept. 30. However, advocates have stressed that the rule flouts constitutional limits, signaling a likely legal challenge.

The first presidential debate featured an initially reserved but quickly belligerent Donald Trump and a heavily prepared and incisive Hillary Clinton, as the candidates sparred on trade, jobs, birtherism, race relations, and misogyny. The early polling and pundit consensus is that Clinton substantially helped her cause.