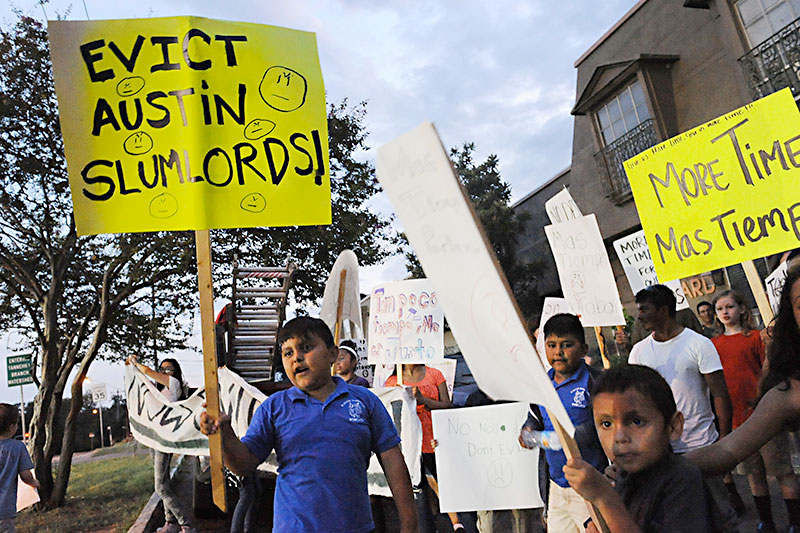 Tenants of the Harvard Place apartments and their children protested the eviction on Thu., Sept. 22. (Photo by John Anderson)

Last Thursday, a crowd of tenants marched through Harvard Place at 5020 Manor Road, near 51st, bearing signs that read "More Time! Más Tiempo!" The protest, organized by Building and Strengthening Tenant Action, was in response to the landlord's announcement on the first of the month that the 30 families currently living there would have to leave by the end of September.

The short notice given may be due to the way in which the property is switching hands. In August, then-owners Thrive, FP sold the 58-unit complex to Accommodation Ser­vices, LLC, a company that specializes in 1031 tax deferred exchanges. These involve a company like Accommodation Services acting as an intermediary owner of a targeted property until the future owner, in this case Tarrytown Townhomes, LP, managed by Andrey Derevianko, Aaron Rasty, and others, is able to sell one of its own properties, so that it can use the proceeds from that sale to buy the targeted property.

Before 1979, the tax code required there to be an actual exchange of property between two parties and for that exchange to be simultaneous, or performed in a single day. After Starker v. United States, among other court decisions, the rules expanded to allow the "replacement" property to be selected within 45 days of selling the old property, and acquisition of that property could occur within 180 days.

"What used to be a simple tenant-landlord relationship is now a complicated web of ownership which makes it difficult for the average tenant to know who to negotiate with," said Shoshana Krieger of BASTA. "Even if this transaction is not legally wrong, it's morally wrong." As of press time, Derevianko and other Tarrytown reps had not returned multiple requests for comment.

Mayor Pro Tem Kathie Tovo also has not been able to reach a Tarrytown representative, after she was notified of what was happening last week. "It's personally very frustrating," she said. "If I have had difficulty reaching the owners, I can't imagine what it's been like for the tenants."

On Wednesday, City Council Member Greg Casar, along with Tovo and CMs Pio Renteria and Delia Garza, held a joint press conference with BASTA to express their support. The group said in a statement: "We urge the property owners to provide the tenants with more time to identify safe and stable housing in the area."