Beside the Point: Still Waiting for the Punch Line

Awarding an anti-choice, nonmedical group a million-dollar state health contract is nothing short of absurdist comedy

A couple of weeks ago I attended comedian Lewis Black's show at the Paramount Theatre. His acerbic, finger-waving, politically charged act didn't disappoint. As a journalist, I was there partly for the cathartic experience of hearing political hypocrisies cleverly called out and slapped with a satisfying punch line (or, an even more satisfying profanity-laced, high-octane rant, as Black is known for). I was also there to unwind and catch a few laughs to recharge in between reporting that includes covering the state's latest assault on women's health.

But my attempt at escaping from the harsh realities of my reproductive rights reporting didn't succeed, as I was reminded once again that the conservative-led attacks against women's health care are so pervasive, they're often inescapable – even at comedy shows.

Amid his shots at Donald Trump and Ted Cruz, and lamentations that today's political reality is now converging with fiction (a theory I wholeheartedly endorse), Black read aloud from a newspaper article about another red state's effort to defund Planned Par­­ent­hood. The state directed these displaced women to a list of other providers they could go to for basic preventative health care that, absurdly, included a podiatrist (a foot doctor). At that moment I wanted to call out to Black that he needn't venture to another state for material, it's all right here!

After booting Planned Parenthood and its 50,000 low-income, uninsured patients from a life-saving Medicaid program in 2012, Texas offered a similarly error-riddled list of providers that included a pediatrician's office, a colonoscopy screening clinic, and even a Subway sandwich shop. I can almost hear Black's voice, dripping with derision: Sorry you can't get your pap smear this year, but have you tried the Sweet Onion Chicken Teriyaki sub?

I wanted to also tell the man who has mastered lampooning political absurdities that Texas, seeking to fill the void in the Medicaid program caused by its politically motivated exclusion of Planned Parenthood, recently doled out a $1.6 million health contract to the Heidi Group, an anti-choice organization led by a woman who genuinely believes one can contract HIV through the sewer drains, and Ebola through the air. Here, Black could employ his hallmark rhetorical repetition, intoning the sentence slowly three times, allowing the insanity to really sink in, and then a pause for dramatic effect. HIV through the sewer drain? Ebola through the air? The air? The air? The f-ing air?

Carol Everett, a fervent anti-abortion activist, runs a network of crisis pregnancy centers that offer no actual medical services and whose mission is to deter women from abortion. At least two of the providers Everett will hand the taxpayer funds to will be "Crisis Pregnancy Centers," she previously told the Chronicle ("Anti-Choice Group to Receive $1.6 Million Health Grant," Aug. 15). And as we recently learned during a Texas Senate Committee on Health and Human Services hearing on Sept. 13, the Heidi Group had only applied to be part of Medicaid – a requirement to be eligible for the contract – right before they were awarded the grant. By HHSC Assoc­iate Commissioner Lesley French's own admission last week, the state health commission was "not aware" of the group offering any medical services before this point. Black could easily opine: I've never offered medical services before either and, unlike Everett, don't even believe you can contract Ebola from air vents, so aren't I technically more, or at least as qualified? So, where do I sign up to get my million-dollar grant from Texas? Oh, and since Subway was mistakenly listed as a provider, maybe now they can legitimately apply for the cash, too?

Despite what conservative lawmakers will boast in the coming legislative session, the new Healthy Texas Women program, now lacking federal aid due to Texas' anti-choice rule, serves thousands fewer patients than before the cuts took place. Adding insult to this injury, the health commission has launched a massive marketing campaign to advertise the health program the state so aggressively tattered, with a subtle tone of Reagan-era self-reliance – a propagandistic maneuver to place the onus of health care on low-income women and not the state that has so deeply failed them. Those pink billboards scattered around town and radio ads you're hearing implore independent women to "take charge" of their health and remind them they are "unstoppable." Well, hell, they must be unstoppable if they can survive without basic health care.

The jokes write themselves here. You barely have to try. But perhaps that's the least funny part. Perhaps the ability for Texas' attitude and policies toward women and their basic right to health care to so easily translate into comedic fodder isn't so humorous at all. In fact, it's downright tragic.

In one of his rare moments of calm, Black – noting he was just down the street from the Texas Capitol – somberly and sincerely pleaded to lawmakers, "Don't defund Planned Parenthood, just don't. Unless you have something to replace it with."

No joke, no punch line. But sometimes you still have to laugh to keep from crying. 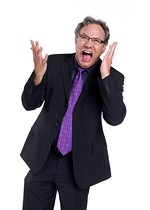