Activists, lawmakers call on State Board of Education to reject racist Mexican-American textbook 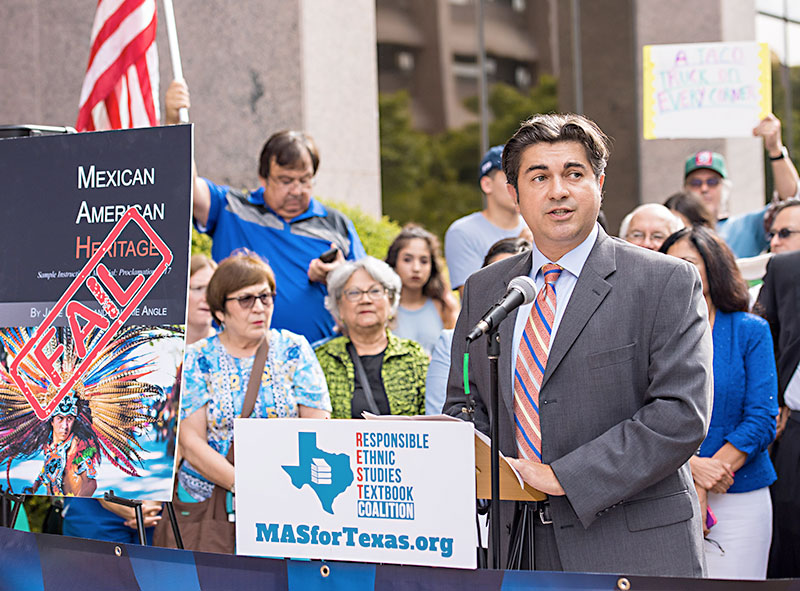 Roughly 200 educators, lawmakers, and activists – many of whom traveled from all over Texas – gathered outside the William B. Travis building on Tuesday, Sept. 13, to fervently oppose a newly proposed ethnic studies textbook they see as blatantly racist and teeming with unsalvageable factual errors. The book is so pervasively tainted with offensive bias and negligent inaccuracies, advocates urged the Texas State Board of Education to completely discard it.

The book "attempts to indoctrinate students with a twisted and ignorant version of history at a time when Hispanic students make up 50 percent of Texas public school students," said Rep. Eddie Rodriguez, D-Aus­tin, representing the Mexican American Legislative Caucus. "The utter absence of academic integrity alone should keep this book out of Texas classrooms. If Texas sanctions this book, they would ... insidiously put material in classrooms that perpetuates racist stereotypes. This textbook is an insult to all Texans."

The Responsible Ethnic Studies Text­book Coalition, comprised of several organizations including the ACLU of Texas, Edu­cation Austin, the Mexican American Leg­al Defense and Educational Fund (MALDEF), the Texas Freedom Network, League of United Latin American Citizens, and the Texas chapter of the Amer­ican Federation of Teachers, called on the SBOE to reject the high school Mexican American Heritage book for depicting Mexican-Americans as "lazy" and a threat to society, among numerous other racially charged misrepresentations. The group presented 10,000 signatures of citizens who opposed the book.

How bad is the book? A sampling: In one passage, the text says Chicanos "adopted a revolutionary narrative that opposed Western civilization and wanted to destroy this society." Another especially egregious passage calls Mexican laborers "lazy" compared to their European and American counterparts. "Industrialists were ... used to their workers putting in a full day's work, quietly and obediently, and respecting rules, authority, and property. In contrast, Mexican laborers were not reared to put in a full day's work so vigorously. There was a cultural attitude of 'mañana,' or 'tomorrow,' when it came to high-gear production. It was also traditional to skip work on Mondays, and drinking on the job could be a problem," the book reads. They also posit that immigration from Mexico and Central American nations "has been increasingly tied up with an illegal drug trade."

Recently, an ad hoc committee of educators formed by SBOE District 2 member Ruben Cortez Jr., D-Brownsville, reviewed the text and offered a 54-page critical report highlighting more than 140 inaccuracies – either factual errors or errors by omission. The proposed book fails to meet basic professional standards and offers "a prolific misrepresentation of facts," they wrote. The book is "really a polemic attempting to masquerade as a textbook." Cortez addressed the rally on Tuesday, saying the book only offers "hate" toward Mexican-Americans. "You read this textbook and you think it was written by someone in the Donald Trump campaign," he said.

Emilio Zamora, a professor of history at UT-Austin and one of the eight members of the ad hoc committee that evaluated the text, told the Chronicle that he couldn't find any significant Mexican-American women civil rights figures or detect any of the more than 50 Mexican-American studies historians in Texas or their major findings, a gross disregard for the vast historical literature on the subject. Angela Valenzuela, director of UT's Center for Education Policy and another committee reviewer, echoes the shock of finding the text "dripping with racism." She told the Chronicle the errors were so obvious and plentiful, it was almost as though the authors went out of their way to not check the facts.

"You would have to work hard not to find the decades of work that has gone into researching and writing our history – that's what's so disturbing and sickening," she says. "It was mind-boggling going through the pages and finding error after error; I kept asking myself, 'How is this possible?' You could easily Wikipedia your way through this and do a better job." At the least the books are problematic, but at their worst, says Valenzuela, they are an almost Orwellian erasure of history.

So who is behind the deeply flawed, offensive literature? Longtime SBOE observers likely won't be surprised to learn that rabidly far-right former board member Cynthia Dunbar is chief executive officer of the book's publisher, Momentum Instruc­­tion. The creationist-supporting, Obama-birther theory ideologue literally wrote the book against public education, which she called a "subtly deceptive tool of perversion," "tyrannical," and unconstitutional in her 2008 book, One Nation Under God. She's credited with replacing slavery with the "Atlantic triangular trade" and linking the civil rights movement with giving "unrealistic expectation of equal outcomes" for minorities in a controversial social studies curriculum. As Texas Free­dom Network's Kathy Miller noted during the rally, Dunbar failed to invite Latino scholars to the book-writing process to prevent looking "biased," as reported by The Dallas Morning News. Instead, she used "experts in curriculum development" and a Texas A&M University professor to review the book.

Following the rally, the SBOE held a public hearing to debate the book, with nearly 100 speakers, including legislators, expert scholars, and advocacy group members signed up to testify. Among them were AISD board member Gina Hinojosa and former Austin state Senator Gonzalo Bar­rientos, who demanded the SBOE immediately "throw this book out." Rep. Diego Bernal, D-San Antonio, worried aloud of the damage the books would inflict on students if adopted, while Rep. Carol Alvarado, D-Houston, pointed out that textbook co-author James Riddle had authored a telling string of "personalized promise Bible" books as evidence of his lack of credibility.

This is far from the first time Texas textbooks have been criticized for marginalizing minorities and distorting historical reality. Last year, a Pearland mom discovered her son's world geography textbook referred to African slaves as immigrant "workers." (The publisher later apologized and vowed to correct the text.) An independent review found that the board's highly criticized social studies textbook standards, crafted in 2010, contained "serious flaws" with passages on global warming, Islam, slavery's role in the Civil War, and the Christian influence on the nation's founding.

By October, the publisher is expected to respond to recommendations for changes, and the Texas Education Agency will identify all the errors the publisher is required to correct. The board will decide whether or not to adopt the textbooks for the 2017-2018 school year in November. If adopted, school districts aren't required to use the books, but have the option.

Montserrat Garibay, a teacher and vice president of Education Austin, tells the Chron­icle that having the books adopted and put in the hands of AISD students, would be "detrimental" to critical learning, and already stretched-thin teachers would need to work overtime to distinguish fact from fiction. "If we are not showing the truth, teachers need to do our own research and be analytical," says Garibay. "Not reflecting our culture in these books is kind of like erasing our history."