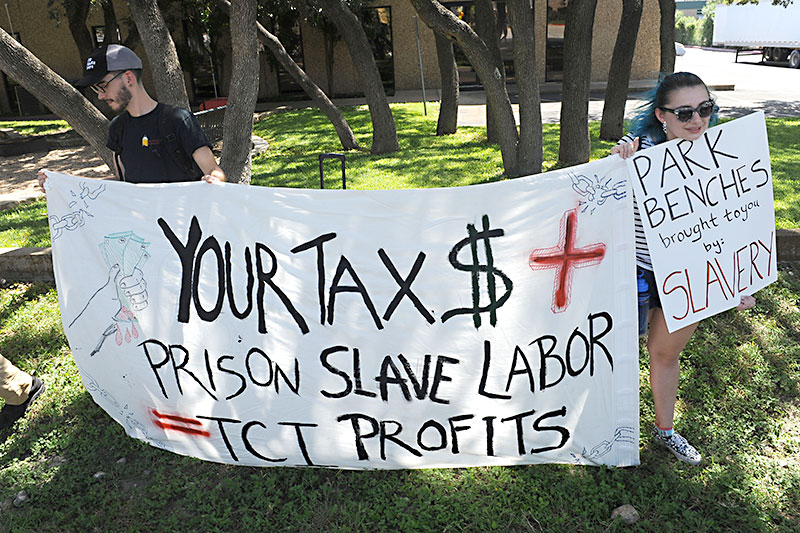 On Sept. 9, the anniversary of the Attica Uprising, local activists gathered at the Texas Correctional Industries South Austin Showroom in solidarity with the Texas prisoners on strike for better living and working conditions. (Photo by John Anderson)

City Council has no Thursday meeting scheduled this week, but probably needs the rest after having just slogged through three days of budget reading sessions. They passed the $3.7 billion budget at the last minute on Wednesday. For more, see "Council: Don't Say I Told You So."

Police Chief Art Acevedo suspended officer Vanessa Jimenez for 20 days on Friday for Taser­ing a handcuffed individual for five seconds during a March 17 arrest at a Down­town booking station. During her disciplinary hearing, Jimen­ez admitted that she had a number of less aggressive forms of force she could have used on the arrestee.

18-year-old Daniel Magee was booked into the Travis County Jail Monday for allegedly shooting a security guard working a party at UT's Sigma Chi fraternity on Saturday. An affidavit indicates Magee fired the shot because he was angry that he was kicked out of the party that night. He has been charged with aggravated assault with a deadly weapon.

City commissions are moving closer to gender balance: Of the 515 commissioners appointed by council members, 43% are women, up from 37% under the previous Council, the Austin Monitor reported. While Mayor Pro Tem Kathie Tovo leads the charge, CM Don Zimmerman lags behind, with only two women among his 36 appointees.

Speaking of gender parity: The Capital Area Metropolitan Planning Organization (CAMPO) isn't doing a great job of representing women and minorities, said a Texas Transportation Equity Assessment released Sept. 12 by Decide Texas. Of those sitting on the transportation policy board and advisory council, the majority are white men. "We need to add some seats at the table for women, people of color, urban residents, and some more diverse points of view," the study stated.

The 5th Circuit Court of Appeals denied a motion for stay of execution from Jeffery Wood, Rolando Ruiz, Robert Jennings, Terry Edwards, and Ramiro Gonzales, who are arguing that the state's highly secretive application of compounded pentobarbital absent retesting shortly before execution violates the Eighth and Fourteenth Amendments.