Commissioners to vote on the health district's FY 2017 budget on Sept. 20 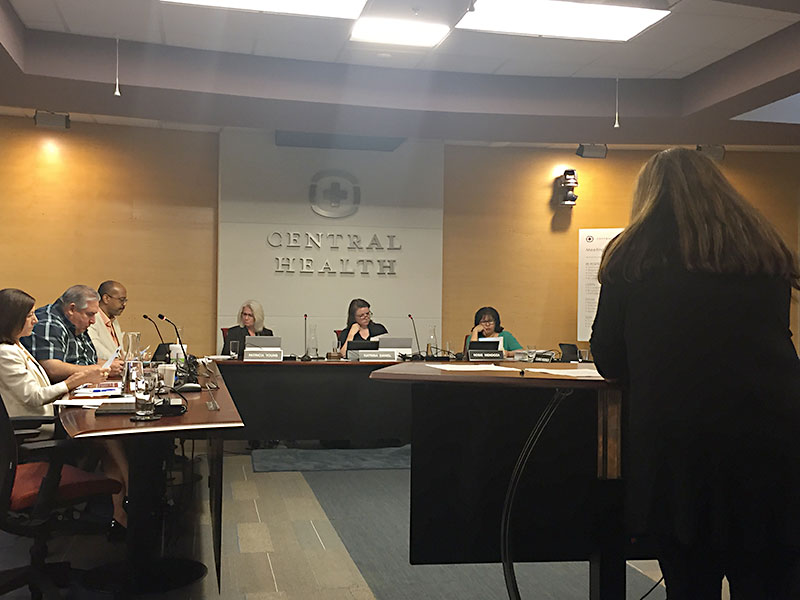 The Central Health board of managers unveiled this year's Community Benefit Report at a public hearing on Wed., Sept. 7. (Photo by Mary Tuma)

Ahead of adopting its 2017 fiscal year budget, Central Health is fielding questions related to transparency and accountability.

The Travis County health district's proposed $240 million budget would increase the average tax bill by $5.59, or 1.8%, with a tax rate of 11 cents for $100 of property value. (While the tax rate is lower than 2016, rising property values are forcing most homeowners to pay a little extra.) That tax burden still falls lower than five other Texas hospital districts, the Central Health board of managers touted during a public hearing and presentation on Wednesday, Sept. 7.

Several groups, including the Health Alli­ance for Austin Musicians (HAAM), Plan­ned Parenthood, Austin Interfaith, and the SIMS Foundation, credited the health district, which targets uninsured and low-income residents, for helping their members or clients access health care. But it wasn't all straight praise. Prefacing their criticism with support for the health district, attorneys Fred Lewis and Bob Ozer called for greater transparency and an independent audit of the budget. Both said a detailed itemization and invoice of services is needed, especially for the $35 million allotted for the agency's partnership with Seton Healthcare Family and UT's new Dell Med­ical School.

"The documents I've seen are insufficient and are not best practices," said Lewis. "They don't reveal the specifics of the underlying services provided by the UT Medical School. Without specific itemization of indigent health care services, frankly neither you nor the taxpayer know if the funds were spent efficiently and properly. Just like a half truth is a half lie, partial transparency is no transparency."

Isabel Lopez with the Austin chapter of League of United Latin American Citizens (LULAC) echoed the concerns, saying she supported the district but also suggested a third-party review of funds. "I think by clearing everything up you will get more support from the community," said Lopez.

The questions, raised at previous public hearings, have prompted Central Health to release a fact sheet clarifying its practices. Patricia Young Brown, Central Health CEO and president, tells the Chronicle she understands the need for transparency, and that Central Health plans to talk to Lewis about his concerns, but she says there is a "fundamental misunderstanding" of the agreement with the medical school. Because the deal is an affiliation agreement and not a provider contract, an itemized list isn't part of the requirement. The health district doesn't actually receive medical claims or invoices from the medical school.

"There is an attempt to depict that there is a requirement we are not meeting by virtue of not providing a detailed invoice, but that's not our arrangement with them," says Young Brown. "So I think there's a disconnect here." Addressing the investment in indigent care, Young Brown stressed that the UT Medical School funds will, in the end, benefit low-income residents since the money is going toward training for future doctors who will end up serving the immediate community. "It's a long-term investment for a long-term solution," she says.

The Travis County Commissioners Court is expected to give the budget a final vote on Sept. 20.