Is Texas' refusal to implement a national mandate state-sponsored bullying? 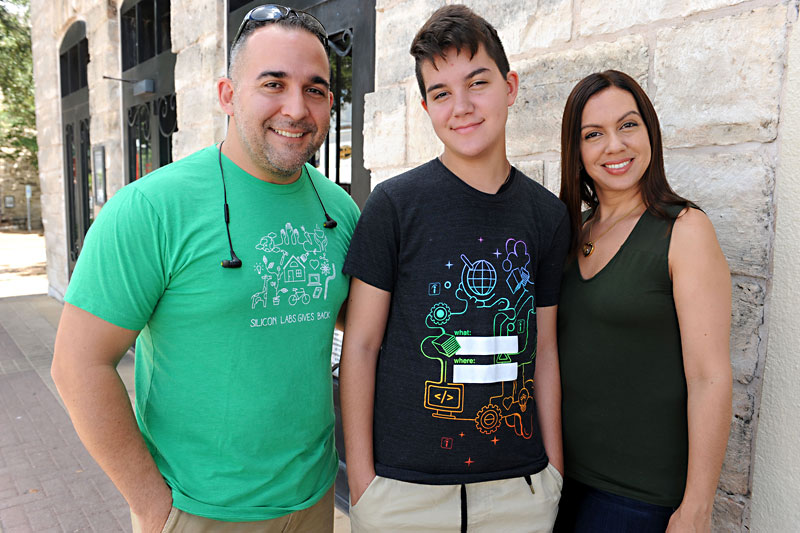 After watching The Lion King at age 3, Gabriella Noriega, curled up next to her mother in bed, looked up and said, "Mommy, I don't want to be like Nala; I want to be like Simba."

Gwendolyn Gross-Noriega, a Round Rock mother, recalls this moment as the first of several over the course of her child's life that alerted her to the idea something may be different. Gabriella soon began asking for short haircuts, opted to wear pants over dresses, and befriended boy classmates over girls. When puberty hit, Gabriella was intensely shy in the restrooms, locker rooms, and gym showers. By age 12, Gabriella had a crush on a girl, and her mother came to the conclusion her child was a lesbian. She took Gabriella to visit a counselor, who diagnosed her with depression. "She felt uncomfortable and felt like she didn't belong," says Noriega. At 13, Gabriella finally came out as her true self: "I am a boy and have always been a boy. I'm transgender," she told her mother.

The journey to finding Dakotah, the name Gabriella now legally goes by, was a long and difficult one, fraught with instances of bullying and verbal harassment from classmates and feelings of insecurity in private facilities among peers of the gender assigned at birth. But also a journey that, thanks to local LGBTQ-friendly resources like Out Youth and the support of family, ultimately led to happiness and relief.

Dakotah began high school this fall at Cedar Ridge, and Noriega says she's fortunate that Round Rock ISD has been accommodating to her son. Corey Ryan, RRISD spokesperson, says the district doesn't have a board policy but deals with the issue on a case-by-case basis by meeting with parents of transgender students to decide what would be in the best interest of the child. "We try to be caring and accepting of all," says Ryan. Dakotah doesn't use the girls' restroom anymore and while he starts his medical transition, he prefers to use the staff restrooms. He is also welcome to use the men's facilities, if he chooses. And that choice is an important one for transgender children, many of whom only feel safe and comfortable using the restrooms that correspond with their gender identity.

However, if Texas officials have their way, transgender students won't have the choice at all. The Texas Attorney General and his anti-LGBTQ legal team have mounted an aggressive, taxpayer-funded effort to allow schools to discriminate against transgender youth. In May, AG Ken Paxton, citing a threat to student safety and privacy, filed suit on behalf of 13 states to block guidelines issued by the Obama administration that encourage school districts to let transgender students use the restroom or locker facility that aligns with their gender identity. The anti-discrimination rules are protected under Title IX of the Education Amendments of 1972, and if schools in Texas don't comply they could put billions of federal aid in jeopardy. That didn't faze Lt. Gov. Dan Patrick or Paxton, who called for an immediate nationwide injunction. On Aug. 21, U.S. District Judge Reed O'Connor, a Ft. Worth federal judge with a history of anti-LGBTQ rulings, granted the state's wish, at least for now, with a temporary injunction against the rules being put into effect – the court must still officially rule on the issue based on its merits.

"This absolutely puts transgender children in danger," says Noriega. "The state has to protect transgender children the same way they would other vulnerable students. But when it comes to gender identity or sexual orientation they don't take the same considerations. It's really upsetting."

Claire Bow says she knew she was "different" when she was 6 years old. When asked to get in one of the two gendered lines at school, she realized all her friends were in the opposite line, where she belonged. But in her small West Texas community, "transgender" wasn't part of the vernacular. Bow spent much of her adult life working for the state, including a decade in the Attorney General's Office until 1998. Immediately following her departure from state government in 2014, Bow transitioned. Today she serves as general counselor and a volunteer with the Transgender Education Network of Texas, and is on the board of the Austin LGBT Bar Association.

Bow says the guidelines issued by the Obama administration were nothing new – more a summary of rulings that had recently been handed down from various district courts and federal agencies. The trans-inclusive policies have been in place in school districts throughout the nation as part of the law under Title IX, says Bow. In the wake of the Department of Justice's suit against North Carolina's anti-trans bathroom law, the feds simply took a stand in support of the trans community by issuing those guidelines.

But Texas decided to prematurely grandstand without any evidence, a specific case involving a transgender student, or the immediate threat of losing federal funds. "Texas basically wanted to pick a fight because maybe one day someone was going to stand on their front yard," says Bow. The state alleges they will face "irreparable harm" if they are barred from discriminating against transgender students since doing so means they could maybe, one day, lose federal funds. "I'm having a hard time understanding why they want to discriminate against transgender students in the first place," says Bow.

The temporary injunction makes clear the issue is more about whether or not the feds followed procedure when issuing those guidelines, rather than transgender rights and policies themselves. It says states aren't obligated to follow those rules, but doesn't prevent schools from accommodating transgender students. "This case presents the difficult issue of balancing the protection of students' rights and that of personal privacy while using school bathrooms, locker rooms, showers, and other intimate facilities, while ensuring that no student is unnecessarily marginalized while attending school," wrote Judge O'Connor in his 38-page order. "The resolution of this difficult policy decision is not, however, the subject of this order. Instead, the Consti­tu­tion assigns these policy choices to the appropriate elected and appointed officials, who must follow the proper legal procedure."

Whatever the reality may be, the state-backed suit and the injunction will inevitably encourage anti-LGBTQ activists to feel confident in their quest to discriminate. Trans and gender-noncomforming kids in particular, says Bow, already face an enormous amount of discrimination, and now the state is singling them out in a way that is dangerous to their safety.

According to a 2014 report from the Amer­ican Foundation for Suicide Pre­ven­tion and the Williams Institute, 41% of transgender people have attempted suicide (a stark contrast to the 4.6% of U.S. residents overall), with the prevalence higher among younger people. More than 50% of transgender respondents said they have experienced harassment or bullying at school. Similarly, the Centers for Disease Control found that among 1.3 million students, LGBTQ youth have a far greater risk for suicide, bullying, depression, and rape. The CDC called for "accelerated action to protect their health and well-being."

"There is nothing inherently tragic about being transgender – it's the way we are treated and the discrimination we face that contribute to those statistics," Bow stresses.

Lou Weaver, a transgender man and program coordinator with Equality Texas, hears from transgender students across the state who are skipping the restroom altogether out of confusion and fear. They're "holding it in," says Weaver, because they would rather sacrifice their health than face a bully or feel unsafe. "State officials are telling transgender students that it's okay to discriminate against them; that they are not the same; that they are not valid human beings," says Weaver. "That's detrimental to a student's mental health." 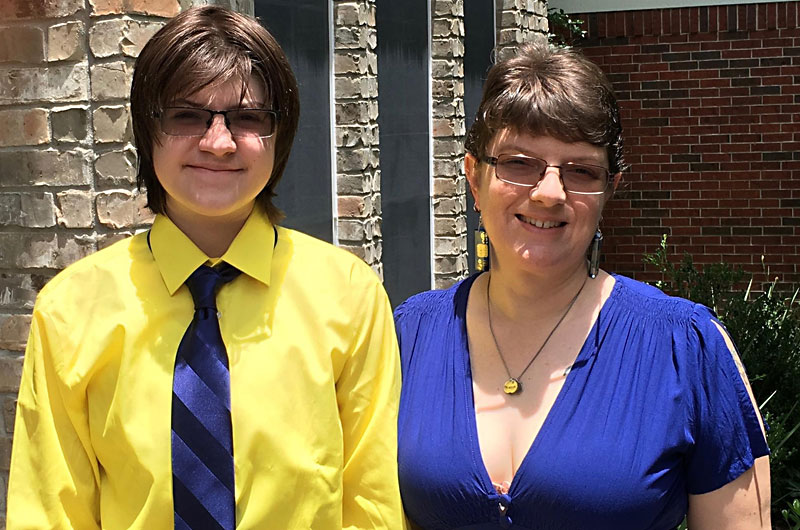 Ryan Zimmerman with his mother Margaret (Courtesy of Margaret Zimmerman)

Ryan Zimmerman spent the summer after sophomore year at Pflugerville High School adjusting to life after transition. When his mother Margaret asked how he wanted to treat the transition at school (Did he want to come out? How was he going to handle being called by his birth name before his name is legally changed?), the question of which restroom he wanted to use came up. "I'll just hold it in," answered Ryan.

As a mother, Margaret deemed his answer unacceptable and unhealthy. She turned to her ISD for support, and together they crafted a solution that made her son comfortable: Ryan would use the nurse's office. Never once did they force her son to use the girls' restroom. "We treat every person as an individual, and we work with the student, the parents, and each campus on a case-by-case basis," Steve Scheffler of Pflugerville ISD tells the Chronicle.

Margaret shudders at the thought of state officials trying to decide which restroom her child will use. Moreover, the state-led rhetoric and legal attack on transgender children has her on edge. The threat of verbal or physical harassment lives with them on a daily basis – her other son has fears of a brick being thrown through their house window by anti-LGBTQ bigots. While they are supported in their immediate community, the Zimmermans see the state's crusade against students like Ryan as a cause for deep concern.

"It pisses me off like you wouldn't believe," says Margaret Zimmerman. "They are fearmongering and scapegoating. They are attacking a community that is vulnerable and can't fight back on their level. Beyond all of this there is a refusal to accept the fact a trans woman is a woman and a trans man is a man.

"I believe [anti-LGBTQ] people feel like they have permission to act out because of the atmosphere the state is creating," she continues. "When – not if – there's an increase in hate crimes, I will absolutely place the blame at the feet of the attorney general of Texas."

Ezra Morales is a junior this year at an Austin ISD high school. Realizing his differences at age 4, Morales finally came out as a male to supportive parents in March and is involved in LGBTQ activism. Currently in talks with the AISD about his situation, Morales feels hopeful the local district will accommodate his needs. Like Pflugerville and Round Rock, AISD does not have an explicit board policy on transgender use of restrooms but "efficiently work to accommodate individuals on a case-by-case basis, as the need arises," according to district spokesperson Tiffany Young.

Morales feels like the state-sponsored controversy over transgender restroom use is meant to shame him and other students in his position. A churchgoing Catholic, Morales taps into his faith to keep him strong in the face of adversity from anti-trans hate. "I bet Paxton hasn't even talked to one single transgender student in his life. How can you base your judgment on someone you've never met?" said Morales. "I don't think they realize how much pain this is causing me and my peers. They are abusing their power to the extent that it is ridiculous. But we're paying attention."

A version of this article appeared in print on September 9, 2016 with the headline: State-Sponsored Bullying