Art Acevedo backpedals on a suspension to avoid arbitration 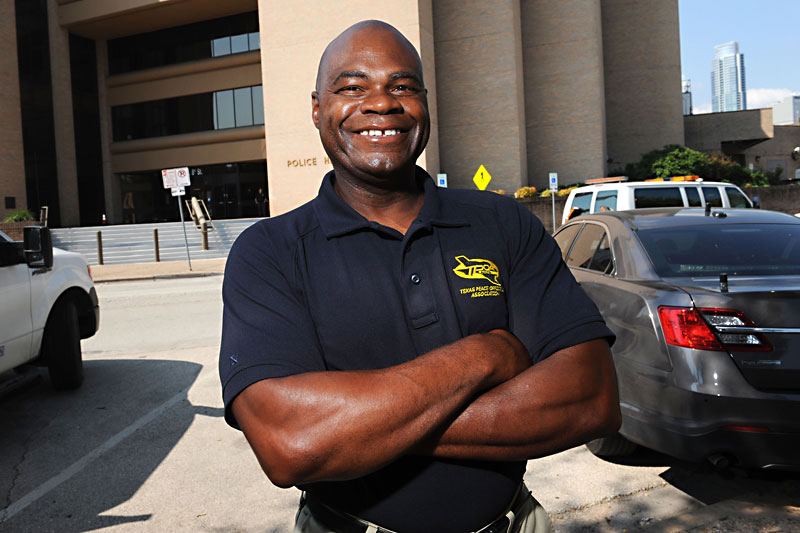 Former Austin Police Lieutenant Johnny McMiller won a contract grievance against the City of Austin on Aug. 3. The decision, rendered by arbitrator Chuck Miller, nets the longtime officer $104,295 in accrued sick leave and allows McMiller to retire from the department in good standing. It also brings an end to a labor standoff that began in June 2015 and first went public in December, when Police Chief Art Ace­vedo handed McMiller an indefinite suspension, terminating him from his position.

McMiller lost his job in part because of the role Acevedo concluded the lieutenant played following the June 6, 2015 actions of Nathaniel Roberts. Roberts, then a sergeant at APD, was working a secondary employment with Capital Metro (for which APD holds a law enforcement contract) when he arrived early for his shift, knocked off for five-and-a-half hours to fix his house up for a potential sale, then missed out on the clock-out at 1:30am the next day. Roberts wasn't heard from until an hour later, when he received a call from Lt. Ken Murphy, who also worked the Cap Metro contract. Shortly after, Murphy alerted Cap Metro Security and Roberts' chain of command at APD.

According to Ken Casaday, president of the Austin Police Association, secondary employment infractions occur "on a fairly regular basis." In a January bulletin sent to APA membership, Casaday wrote: "What normally happens with these violations? Our employer disciplines the officer and everyone moves on." (Indeed, Roberts was quickly dismissed from his position on the Cap Metro contract.) APD's Employee Handbook, however, stipulates that the chief can discipline officers for secondary employment infractions if the infractions also violate APD policy. That brought Roberts in front of Internal Affairs for a review in mid-October. He was eventually suspended 60 days and demoted from ser­geant to corporal/detective (which share a rank) for Neglect of Duty, violating Second­ary Employment Guidelines and Rules, and Acts Bringing Discredit Upon the Department. Roberts waived his right to an appeal so that Acevedo wouldn't issue an indefinite suspension.

It wasn't long after Roberts went before IA that McMiller got summoned to speak with IA Sergeants Adam Masters and Mark Herring. McMiller held the master contract with Cap Metro; Roberts worked under him. During questioning, Masters and Herring concluded that McMiller knew of Roberts' infractions yet did not report them to APD – a violation of the department's Neglect of Duty policy. The department would also allege that McMiller violated a Do Not Discuss order when he spoke with retired Assistant Chief Pat Ockletree about Roberts being passed over for a promotion. That charge, like the Neglect of Duty, is one McMil­ler denies happening the way Ace­vedo and IA have construed.

McMiller attended the first IA interview concerning his own case on Nov. 10. He left thinking the fix was in: Because of the subjective nature of his charges, and the manner in which he was questioned, McMiller was confident he'd receive an indefinite suspension for the allegations. "Chief Ace­vedo telegraphed [the sanctions] very clearly," said McMiller when interviewed last week by the Chronicle. He announced his retirement with APD's Retirement System on Nov. 17, effective Dec. 31. On Dec. 14, Acevedo issued McMiller the indefinite suspension he'd anticipated. According to the chief, McMil­ler was losing his job because he'd violated four policies: Insubordination, Honesty, Neglect of Duty, and Secondary Employ­ment Guidelines and Rules.

McMiller filed an appeal of his suspension the same day that he received it. He didn't want to go back to work, but he considered the punishment unjust and wanted to clear his name. "If you do an internet search – type in 'Johnny McMiller' – the first six or seven articles will be that termination," he told me. "It won't be all the good things that I've done in police work, or in the Army. It won't be the volunteer work. 25 years from now, my grandkids Googling my name, that's going to pop up. There needs to be an addendum: This guy appealed his decision and the chief was completely wrong."

McMiller also wanted to collect $104,295 for accrued sick leave, which he believed he'd earned as per the APA's meet-and-confer agreement with the city. That agreement stipulates that any officer who separates in good standing after at least 12 years of service is entitled to payment for up to 1,400 accrued hours of sick leave during their term of service – 1,700 if they've used fewer than 80 hours of sick leave in the two years prior to their separation. (The city prefers officers to work, rather than burn sick leave, if they don't need it. As a trade-off, it offers payouts to qualifying officers. McMiller, a sworn officer with APD since Jan. 1993, had actually accrued more than 2,500 hours of sick leave.)

Then something unusual happened. On Jan. 6, three weeks after news of his termination was made public, and a little more than a week after his retirement went into effect, McMiller received written word from Acevedo that his indefinite suspension would be reduced to a written reprimand. The most serious administrative discipline that could be levied upon an officer would be changed to a relative slap on the wrist – an internal notification of a policy violation, the type that gets dished out often without the public knowing. In doing so, McMiller lost his right to appeal. At APD, written reprimands are not appealable. What's more, the reduction meant that Acevedo would issue a Review of Separating Employee's Leave indicating that McMiller didn't leave the department in good standing.

Those who don't leave the department in good standing aren't authorized to payouts of accrued sick leave. The APA filed a grievance on Jan. 19, contending that Acevedo was in violation of the city's meet-and-confer labor agreement by denying McMiller the money he believed he'd earned.

On Feb. 4, Acevedo presented McMiller with a settlement offer: drop the appeal, convince the APA to dismiss its grievance, withdraw a Dec. 11 charge of discrimination he'd filed with the Equal Employment Opportunity Commission, discontinue efforts for a "name clearing hearing," keep his mouth shut about three IA investigations, including Nate Roberts', waive his rights to any outstanding pay or benefits, accept a final classification on his charges of "Administratively Closed, Retired Under Investigation," and he'd receive his accrued sick pay. Acevedo gave him four days to consider the offer, which McMiller promptly declined – opting instead to "roll the dice" on the six-figure payout. On Feb. 9, the APA filed a second grievance, this time challenging that Acevedo's decision to reduce McMiller's discipline barred the retired officer from a hearing on the merits of the grounds for indefinite suspension.

Those grievances were deliberated over the summer. In an 11-page opinion issued Aug. 3, arbitrator Miller challenged Ace­vedo's "motivation" for reducing McMiller's discipline before concluding that the reduction meant that McMiller's indefinite suspension "never became final." All McMiller received was a written reprimand.

"Looking at McMiller's personnel record as it exists today," Miller wrote, "there is no indefinite suspension on his record. That one was in place and on appeal at the time McMiller retired is a fact to be sure, but to say that its temporary existence both defeats McMiller's right to sick leave compensation while at the same time arguing that because its existence was temporary McMiller loses his right to appeal it is non-sensical. Such is not a rational, reasonable, contemplated or harmonized reading and interpretation of the Meet and Confer agreement." McMiller went on to retire in good standing. He's since been paid his $104,295.

Acevedo declined to answer questions about McMiller's case, saying: "He's retired so I don't see an upside to talking about him." Specifically, he declined to explain the rationale behind reducing McMil­ler's discipline, and would not say whether his understanding or interpretation of McMiller's actions changed at any point. Acevedo also declined to discuss whether McMiller's appeal of the suspension affected his decisions. Assistant City Man­ager Rey Arellano also declined comment.

Both McMiller and the APA charge that Acevedo chose to reduce McMiller's discipline in an effort to avoid arguing the merits of the indefinite suspension before an arbitrator. The union identified four other officers who have seen their suspensions "dropped to reprimands" shortly before their arbitrations, for that same reason.

McMiller said that he's considering further action. He began speaking with attorneys about a potential civil case this week. "I want to ask for a sum of money," he said. "I was going to pay the attorney. What's left would go to the APA, the Retired Officers Association. All the organizations that I was a part of."